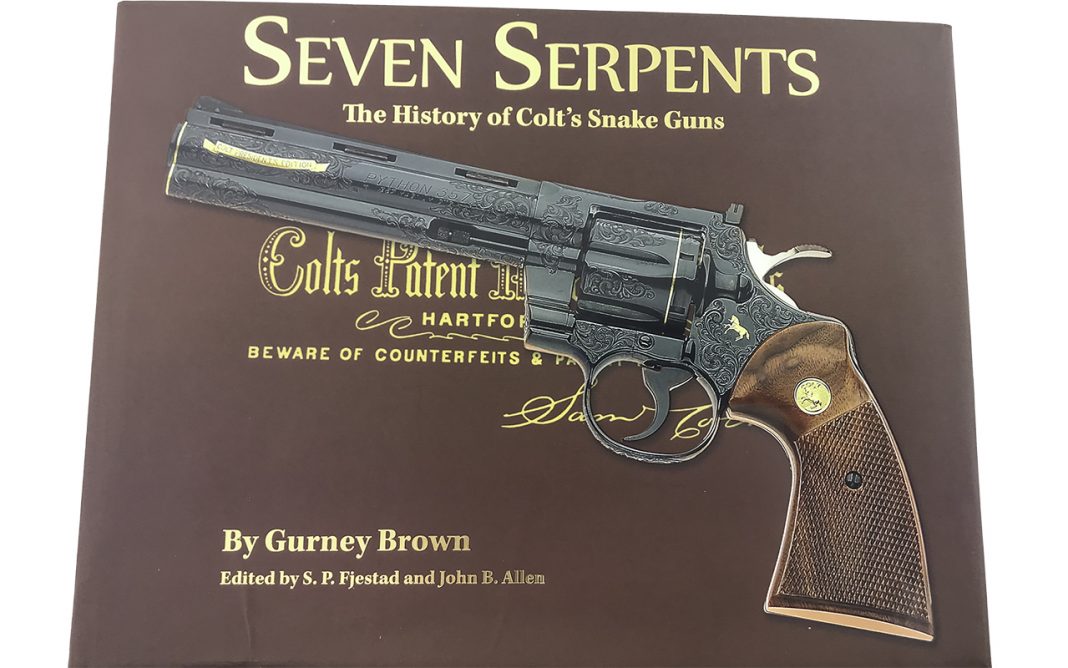 After a depressing week of discussing grim topics of death and murder convictions, let’s talk about guns for a while.

On my desk as I write this is a book that came out six years ago, which I only got around to reading now: “Seven Serpents” by Gurney Brown, who among his many other credentials has served on the board of the Colt Collectors Association.  The seven serpents are what Colt collectors call “The Snake Guns” because of their names.  Some are sought after for their rarity, others because of how superbly they perform the jobs they were designed for. The book treats them in the order of their introduction.

The Colt Cobra, introduced in 1950, was the first lightweight aluminum-frame revolver. I often carried my dad’s in my pocket as a teenager working in the family jewelry store, when it was too hot to wear something that could hide my preferred Colt .45 auto. I lived long enough to see a lawyer claim that the defendant owning a “Cobra” was indicia of malice…sigh.

The Colt Python, introduced in 1955, was a target-grade revolver made almost as an afterthought in .357 Magnum instead of .38 Special. No one ever made a more accurate revolver. They sold for $125 when introduced; originals now sell for thousands; and Colt recently re-introduced an updated version for a more reasonable 1,500 2021 dollars.

The Diamondback in .22 Long Rifle and .38 Special came out in 1966, a little Cobra-size revolver with the deluxe treatment that distinguished the larger Python: exquisite Royal Blue finish, adjustable sights, and distinctive barrel with ventilated rib above and integral full-length barrel weight below.

1977 saw the Viper, essentially a Cobra .38 Special with four-inch barrel.  Only produced for a year, it’s a rara avis eagerly sought by Colt collectors.

The Colt Boa of 1985 was a special, non-catalogued model made exclusively for Lew Horton Distributors, a .357 Magnum on Colt’s updated Mark V action with a Python barrel. Its low production numbers make it highly collectible today.

The Boa was followed by the King Cobra of 1986. S&W’s Models 586 and 686 L-frames were essentially their copies of the Python, as to some degrees was Ruger’s GP100, so Colt returned the favor with this economy priced .41-frame .357 Mag.  A couple of years ago, Colt resurrected the King Cobra name for a .357 Mag version of their compact stainless D-frame revolver.

The seventh serpent was the Anaconda, Colt’s only .44 Magnum.  By the time it came out the market was glutted with revolvers in the Dirty Harry caliber, and it never sold well, being appreciated only after it was discontinued. Colt re-introduced it just this year, and I like the new ($1500) version better than I did the old one.

At $89.95, this is a pricy coffee table book, but as befits that genre, it is lavishly produced with so many fine photographs of superb American workmanship that it should come with a bib to catch the drool. Order from www.gundigeststore.com.  (And order quick: they have a discount going on for it as I write this!)

Having shot all of these guns and owning five of the seven, I appreciate this book. My own favorite of the seven serpents was definitely the Python, and I’m happy that the author’s follow-up book to “Seven Serpents” was “Colt’s Python.”  We’ll review that title in this space soon.