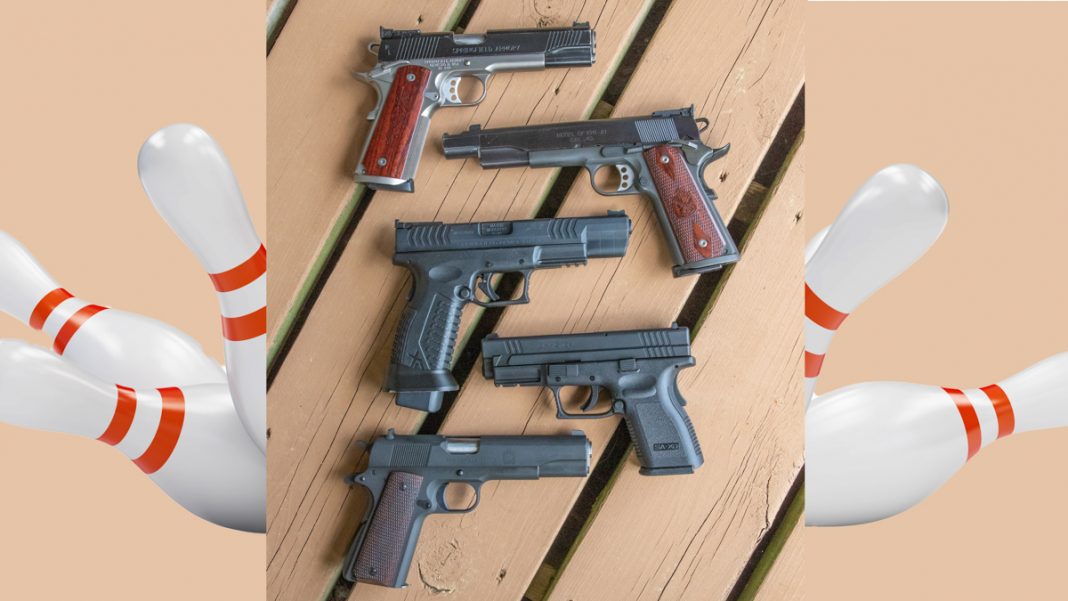 Last June when the Evil Princess and I got back from our favorite shootin’ match, the Pin Shoot in Michigan (www.pinshoot.com, hope to see you there next year) and unpacked, there were more .45s to put back in the safe than anything else.

My lovely bride is five feet tall with proportional size hands, and is partial to the .45 GAP (Glock Auto Pistol) cartridge introduced a score of years ago because it gives her .45 power in a shorter cartridge, which makes for a pistol with less girth to wrap her little digits around. She had brought two of them: a Springfield Armory LE model, and a Glock 37.

Mine were all in the ancient .45 ACP (Automatic Colt Pistol) caliber. A Springfield Armory 1911A1 customized by Mike Plaxco with a recoil compensator was what I used in Pin Gun, Space Gun, and Team events. A more conventionally configured Springfield TGO-II was what I vied with in the Stock Gun division. I used a more modern Springfield XD45 Compact in the Concealed Carry division, and for spare in that event had along the Smith & Wesson Shield .45 I had used for that event the year before. For spares I had a Springfield Mil-Spec 1911A1 that never did get used, and a Smith & Wesson SW1911 that I taught my next class with, a MAG-40 at the excellent Illinois State Rifle and Pistol Association range in Kankakee.  That one stayed on my hip until well into July.

Yup. We also had a couple of smaller guns along, her Glock 43 subcompact 9mm and my S&W Model 340 M&P snub revolver that I like for backup; never had to fire a shot from either of those. There was also a 20-shot Springfield Armory XDM for the one event that was friendly to its 9mm chambering.

The Pin Match requires you to blast heavy bowling pins as far as three feet back from a table while the clock is ticking. That requires power, and momentum.  230 grain +P loads sending the bullet at 950 feet per second are what I like for that, and Gail’s 200 grain GAP loads did it for her.

Yes, .45s kick harder than the currently trending 9mm. Yes, guns the same size hold more narrow cartridges than fat ones.  But watching little 9mm bullets merely tip things over and big .45 ones blasting the same heavy things completely away is kind of a confidence builder.

Forests have been sacrificed for the paper that made gun magazine articles debating large caliber versus medium caliber bullets, and I’ll waste no more here.  By the time you read this, I’ll be carrying a 9mm myself, partly because I’ll be travelling by air to teach…it’s harder than ever to buy ammo at remote teaching venues, so it’s best to bring your own…and with the airlines limiting ammunition in checked baggage to eleven pounds, one can bring twice as many 115-grain 9mm bullets as 230 grain .45 bullets.  And, of course, in guns of the same size 9mm gives you more shots than .45 before you have to reload, with the clock running.

You pays your money – and, don’t forget, you assess your particular immediate needs! – and you takes your choice. Advances in modern ammunition have allowed the 9mm to perform better than ever…but those same advances have improved .45 ammo, too.

Your comments are welcome. Let the floodgates open.