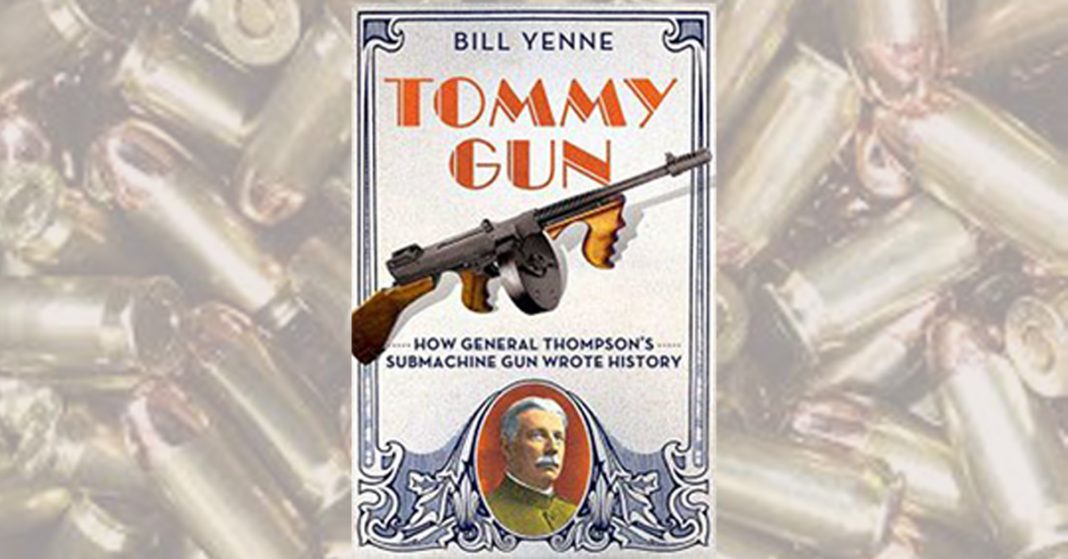 The Thompson submachine gun. It was associated with thugs like Al Capone, John Dillinger, and Baby Face Nelson, but also with stalwart figures like J. Edgar Hoover, Melvin Purvis, and Chesty Puller.  Sir Winston Churchill was photographed with one, reportedly kept one in his limo during WWII, and was called a gangster by the Nazis for doing so.  In fiction, it was the primary weapon of Sergeant Rock in the comic books, and of Mike Hammer in Mickey Spillane’s “One Lonely Night.”

Now comes the book “Tommy Gun” by historian Bill Yenne. There are many books on this classic American firearm and my favorite has always been Bill Helmer’s “The Gun That Made the Twenties Roar,” but I have to say “Tommy Gun” ties the Helmer book in that respect.

Subtitled “How General Thompson’s Submachine Gun Wrote History,” the book proceeds to go into that history. The development, the financing, the byzantine workings of military ordnance adoption, and the instrument’s use in many countries and many wars, its use on both sides of the law in the USA, and more.

Yenne doesn’t seem to have been into this sort of thing until he started the book, but I give him credit for getting out there and shooting the damn thing, and rather accurately describing its handling characteristics. He dug deep into the gun’s history with surviving people who used it – with numerous accounts from American (and other) soldiers whose bacon it saved, and also the few surviving people who had been part of its manufacture and sale. He pays homage to Helmer, who decades ago wrote his definitive book after interviewing way more of those prime movers who were then alive.

I like Yenne’s writing style. My only beef is in “combat semantics”: he frequently refers to the Thompson’s “.45 caliber ACP” cartridge, when all of us in my world call it simply “.45 ACP” (Automatic Colt Pistol) and having established that, simply say “.45” thereafter. But that’s a picayune criticism for an author who can write such evocative and insightful sentences as “The tommy gun is not just a gun, it is an enduring artifact of American culture, with an image that has been crafted and massaged by popular culture for nearly a century.”

I particularly liked his positive portrayal of law-abiding American citizens who own and shoot Thompson submachine guns and similar full auto weapons. An old friend of mine who occasionally comments here is an ex-military man who paid $45,000 for his mint 1928 Thompson with all the trimmings.  I love America.

And I love the book “Tommy Gun” by Bill Yenne. Published in 2009 by Thomas Dunne Books, it should be available on Amazon and is worth way more than the $8 I was fortunate enough to pay for my second-hand copy at Half Price Books in San Antonio a few weeks ago. This book could be the foundation for an MBA thesis at Harvard Business School, a primer for young American soldiers preparing to go to war, or a topic for a writers’ seminar on how to make a topic of interest only to specialists and hobbyists appealing and usefully informative to the general public.