Of the countless masterpieces of gun design genius John Moses Browning, this one may be the most enduring. Adopted by the US Government as its military handgun all-service-wide in the spring of 1911, it remains in service today. The USMC’s MEU-SOC unit issues 1911 Kimbers; each member of the Army’s elite Delta Force gets an allowance to purchase his own 1911; all the military teams still issue 1911 .45s to their pistol teams; and this style of handgun is probably more popular than ever today in both the private citizen and the police sectors.

There are Browning designs that are still more important in battle today, such as the almost-as-enduring M-2 .50 caliber heavy machine gun. If you hunt birds with a Browning Automatic-Five shotgun, you know it carries its name for a reason. Do you hunt deer with the venerable Winchester .30-30 lever action, Model of 1894, or go to cowboy action shoots with a Winchester ’92 pistol-caliber carbine or one of its clones, and a Chinese Norinco copy of the Winchester Model 1897 pump gun? If so, you’re still running with JMB designs that are older than even the 1911.

I shot a good part of last year’s competition season with a Wilson Combat CQB 1911 .45, and will doubtless spend a substantial amount of time with it during its centennial year. After all, I’ve had one since I was twelve, and have been a 1911 shooter for roughly half of its century of dominance in its world.

It points well. It fits the hand well. While it tends to have problems when people who think they know more about it than the genius who designed it change its springs or its parts or its tolerances, it remains the first pistol to ever pass a US Army Ordnance test 100%: six thousand straight rounds of .45 ammo without a malfunction.

Originally conceived as a .45 caliber Colt with five-inch barrel, the 1911 is available today chambered for a long list of cartridges, from .22 Long Rifle on up, and can be had with barrels ranging in length from three-inch subcompacts that can be concealed in ankle holsters to six-inch barrel dedicated target pistols, and produced by more manufacturers than I can keep track of. In the firearms world, the 1911 design has a history worthy of tribute.

I always celebrate January 9, anyway. It’s my first grandchild’s birthday, and also my mother’s. My mom was there when I unwrapped my first Colt 1911 .45 under the Christmas tree half a century ago. Will I carry a 1911 on 1/9/11? You bet, if only for the sake of sentiment.

My mother would understand.

1911 pistols…gotta love ’em, if you’re into guns …this one is by Ed Brown Custom. 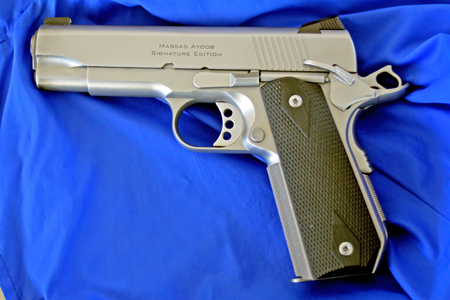