Through the extremely generous good offices of my friend Chuck McDonald I now have a gun that has fascinated me for many years: a “Smython,” also known as a “Smolt.”

The brand rivalry of Colt versus Smith & Wesson is older than Ford versus Chevy or Coke versus Pepsi.  In the third quarter of the 20th Century, gunsmiths started putting Colt Python barrels on Smith & Wesson revolvers (usually medium size K-frames, but occasionally the larger N-frames). Though it has been postulated that it was for one-handed bullseye shooting, my understanding has been that it was really for PPC, the Practical Police Course, shot on the tight-ringed B27 target with 24 of every 60 shots fired from 50 yards. The faster rifling twist of the Colt barrel generally made that brand a tiny bit more accurate than the slower-twist S&W barrels with .38 Special target loads. Why the Python barrel in particular, since the Python wasn’t introduced until 1955 and Colt had been making double action target revolvers on the same frame since the first decade of that century? Because the Python was the deluxe show-pony of the Colt line, and Colt engineers came up with the feat of tightening the bore by a thousandth of an inch from forcing cone to muzzle. This was believed to drive the lead bullet deeper into the rifling, resulting in the Colt’s slightly greater accuracy. The weighted full-length underlug beneath the barrel held the gun steadier on the tiny X-ring of the target: S&W didn’t make such a gun until circa 1980, when they came out with their Distinguished Combat Magnum L-frame series, models 586 (blue or nickel) and 686 (stainless), essentially an S&W copy of the Colt Python except that its rib atop the barrel did not have the Colt’s distinctive (if largely useless) “ventilating” cuts.

Why put a Python barrel on a Smith & Wesson instead of just buying the whole damn Python? Because most police revolver shooting in the PPC game (and of course, in defensive shooting in general) is done double action, and the Colt had a two-stage pull that “stacked,” or became a little harder at the end of the trigger stroke. The S&W was smooth and even all the way through a single pull, which most of us found more manageable.

Why else? “Because they COULD.” The S&W frame and the Colt barrel do not “mate” in nature, and it requires some pretty fancy machining to get that to happen. It was kind of like Smith & Wesson’s original Registered .357 Magnums from 1935, with fine grooves on the side of the hammer and checkering on the top of the frame that did nothing at all for the shooter but simply showcased how finely S&W could craft a handgun. The Python barrel on the S&W frame sorta gave the same showcasing of a gunsmith’s skills.

I’m not sure who the first gunsmith was to do this, but I think it may have been the great Bill Davis, in California.  Because the S&W has been proven to work better with front-and-back lockup since around 1902, Davis laboriously installed a spring-loaded front ejector rod lug in the Python barrels of his conversions. Some other gunsmiths installed a ball-detent where the frame meets the cylinder yoke to lock the forward end of the cylinder in place.  The specimen on my desk as I write this is not marked and has no written provenance as to the gunsmith, but the barrel-mounted front lug smacks strongly of Bill Davis’ work.

For frosting on the cake: Most of these guns were made on target-model Smith & Wessons with micrometer adjustable sights already installed. This one was done on a Model 13 “pinned and recessed” (S&W aficionados know what I’m talking about), which was a fixed sight .357 Magnum revolver. That means a great deal more machining had to be done to install adjustable sights, which were expertly and seamlessly melded onto this particular revolver. It also has the wide target hammer and target trigger, not normally sold with the service-style six-shooters.

A much smaller number of such fusions were made with Colt Python barrels on Ruger Security Six revolvers, which inevitably became known as Cugers or Cougers. Again, Bill Davis is the gunsmith most often associated with the conversion.

For more on the classic Colt Python itself, the 3-segment magnum opus I wrote on it almost 40 years ago for American Handgunner can be found here.

Yes, some of us gun collectors are into arcane minutiae.  All I know is, I can’t wait to shoot this darn Smolt. 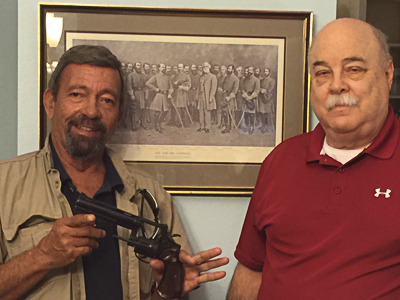 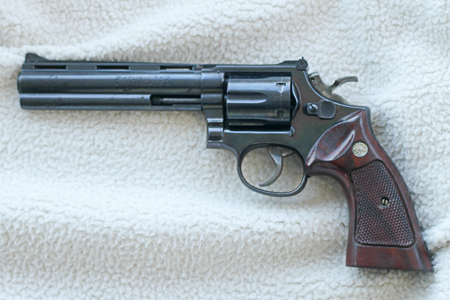 Compared to 6″ barrel Colt Python at left, the “Smython” at right has a front lug lockup for the S&W ejector rod. Arrow shows the pin which holds it in place. I suspect the fine hand of master gunsmith Bill Davis at work here. 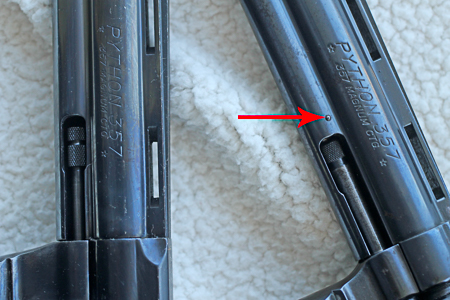 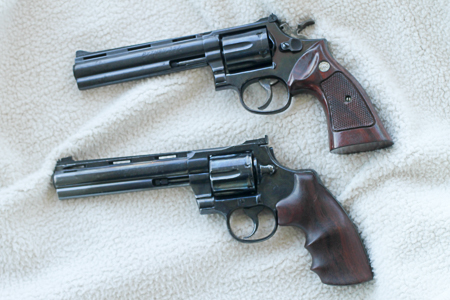