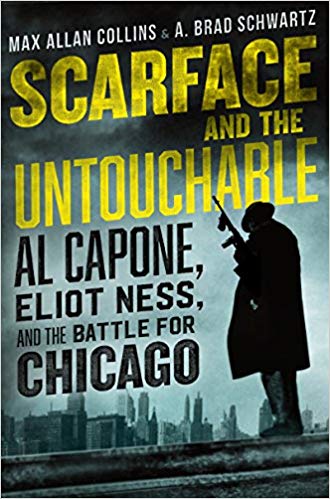 I recently finished “Scarface and the Untouchable: Al Capone, Eliot Ness, and the Battle for Chicago” by Max Alan Collins and A. Brad Schwartz.  It turned out to be a compelling read.

Oscar Fraley’s book “The Untouchables” appeared in the 1950s and led to the iconic TV series of the same name.  Ness was seen as the incorruptible Federal agent who sent the legendary crime boss up the river on income tax evasion charges.  Some naysayers emerged to say that Ness’ role was of little consequence and that he was a glory hound, but exhaustive research by Collins and Schwartz seems to indicate that Ness did indeed deserve all the credit he was given.

This is the first work I’ve seen by Schwartz. For some time I’ve been a fan of the excellent fiction of Collins, the designated heir to the unfinished work of Mickey Spillane, whose Mike Hammer novels I had grown up reading.  This is my first experience with his non-fiction.  I was pleasantly surprised at the quality of their research.

It turns out the two antagonists had many things in common.  Each was remarkably young for the positions they achieved in their competing worlds.  Each seems to have been a natural leader.  Each understood the value of cultivating the press to make their efforts look good in the public eye. Each suffered greatly from the professional envy of their respective peers. Each dealt with illnesses that would end their lives early, congenital heart disease for Ness and syphilis for Capone. And each had long-suffering wives who were hurt by their husbands’ lifestyles.

It turns out they also had similar taste in guns.  It seems that neither cared to carry a gun all the time, and only went armed when they felt they’d need one.  “Scarface and the Untouchable” mentions times when each was armed with a large automatic pistol.  During the period, this most likely would have been the Colt .45 automatic of 1911, though the Colt .38 Super was introduced during their time, in 1929.

What the book doesn’t mention is that each of those disparate men seemed to favor the D-frame Colt .38 Special revolver.  Ness said he carried a snub-nose Colt .38, which would have been the Detective Special introduced during the 1926-27 period.  The one documented Capone gun I’m aware of was a longer-barreled Police Positive, which sold for big bucks at auction a few years ago.

Each man also had his issues with the criminal justice system.  The book indicates that Ness was once falsely accused of taking graft, and Collins and Schwartz seem to feel that while Capone should have been tried and convicted for multiple murders, the tax case against him was weak and very poorly defended, both at trial and on appeal, by his attorneys.

A great read, strongly recommended for those with an interest in the history of the American criminal justice system.