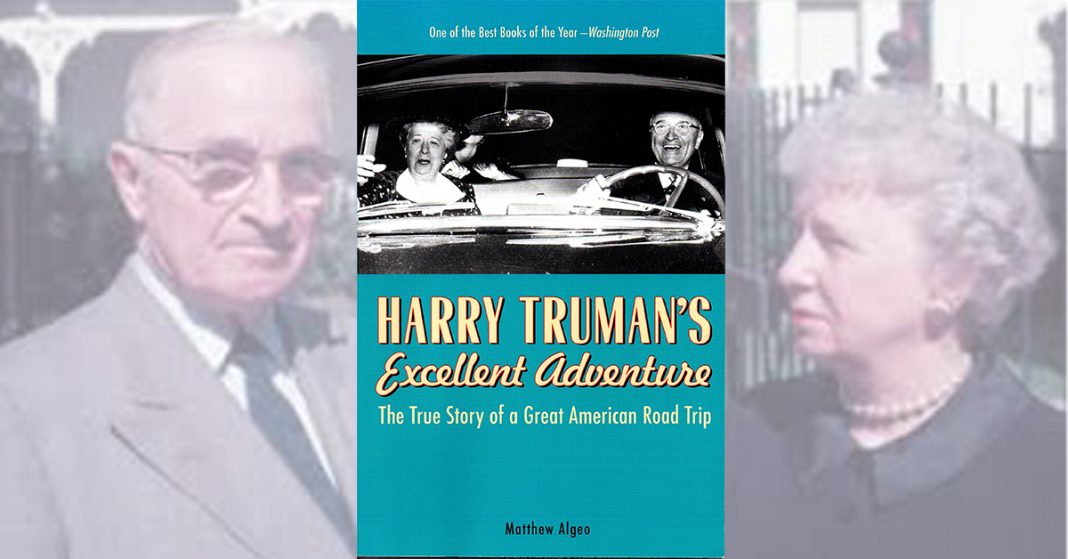 A friend and reader tipped me to the book “Harry Truman’s Excellent Adventure: The True Story of a Great American Road Trip,” by Matthew Algeo (Chicago Review Press, 2009).  I really appreciate that.

I enjoyed this book more than any other I’ve read in quite a while.  I found it … charming, a word which has a very small and rarely-used place in my own vocabulary.

After graciously turning over the controls of government to his successor, Dwight D. Eisenhower, Truman and his wife Bess left Secret Service behind and went on a road trip in his new 1953 Chrysler New Yorker, with Harry at the wheel virtually the entire time.  Visiting friends in DC, doing the tourist thing in New York City where their only child Margaret lived, and eventually back to their home in Independence, Missouri, the Trumans were in touch with ordinary Americans the whole time.  There are some who argue that they were the last “ordinary American” first family to occupy the White House.

Truman has always been a hero of mine. He was the man who had the courage to pull the trigger on the atomic bombs that ended World War II, probably preventing a seven-digit count of casualties on either side had the war continued.  Describing himself as an ordinary citizen and ordinary tourist during the trip, he found out otherwise.  People were shocked to see this luminary and his wife out and about, not surrounded by bodyguards. When some local police chiefs learned he was in town alone with his wife, they scrambled their cops to provide protection: no one was going to assassinate an American President, past or present, on their watch.

Author Matthew Algeo provides context. Not only the political background of Truman and his times, but little life details.  How roadside motels rose in America, for example.  The economy of the time.  People were frustrated that gasoline had gone up to 27 cents a gallon, and Truman – who kept scrupulous track of his mileage – was delighted to learn that his big black Chrysler got 17 miles to the gallon on the roads of the time.  (And, by the way, I didn’t know that the movement toward paved roads in our country went all the way back to the popularity of bicycling in the 1880s.)

Truman left the job with no pension at all, and turned down many sinecures and endorsement offers that came from the private sector. Algeo compares that adroitly and meaningfully with some of his successors, most notably the Clintons.

Now, this is a firearms blog, and I should note that I’m unaware of anything Truman ever did that violated the rights of American gun owners.  Some have later said that they think he would have been anti-gun if asked, but that is utterly meaningless since he apparently never did. See here.

History shows that Truman knew his way around guns. He carried an Army-issue 1917 model .45 revolver while overseas in World War I, and also a 1911 .45 auto, the last I’m told being on display at the Truman Museum today,f and he reportedly owned at least one good concealed carry handgun: a Smith & Wesson .38 Chief Special presented to him by a grateful law enforcement leaders’ organization when he was President.  Did he bring it along on his road trip? The book is silent on that, but given that Truman was above all a pragmatic realist, it wouldn’t surprise me at all if he did.