Charlton Heston knew Martin Luther King, and marched alongside him for the civil rights of African-Americans.  Sadly, the American Left was blinded to that when he became a spokesman for, and later president of, the National Rifle Association. 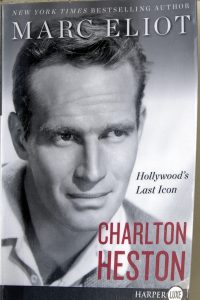 I recently picked up the excellent biography “Charlton Heston: Hollywood’s Last Icon” by Marc Eliot.  In his acknowledgements, Eliot writes, “Grover Norquist gave me an overview of Heston’s involvement with the NRA and a frank assessment of what he thought about the ostracism that followed.” Yes, ostracism seems to be the correct word.

Writes Eliot, “On April 10, 1989, an (NRA) advertisement appeared in Newsweek that pictured a smiling Heston.”  It was his first “outing” as a supporter of gun owners’ civil rights, via the NRA. Eliot: “The fallout was immediate and mostly negative in Hollywood, as he suspected it would be.”  Heston, who had served for two years aboard a B-25 bomber during World War II, had been extremely proud of his high position with the American Film institute.  Eliot continues, “Not long after (the Newsweek blurb appeared), he called Jean Firstenberg. Here is how she remembered that call. ‘He was still on the masthead of the AFI as (a former) president and it meant a great deal to him, but that day he said to me, ‘Jeanie, if you want to take my name off the masthead, I understand.’ How thoughtful of him, knowing there was going to be a political backlash (because of the ad) and not wanting to hurt an organization he cared so deeply about. I never took his name off the masthead.’”

But, the biographer continues, “Most of Hollywood took him off theirs. The only real work he was able to get was a TV film…”

In 1998, the Left became even more choleric against Heston when he was elected President of NRA.  Prominent anti-gunner Josh Sugarmann poured vitriol on Heston and noted, “Whether Mr. Heston does the talking or not, the National Rifle Association remains the same extremist organization that blocks sensible gun laws and markets guns to children.” Heston continued with the NRA, living long enough to be sandbagged as a frail old man with developing Alzheimer’s, by that caricature of journalists, Michael Moore.

Charlton Heston passed a little more than nine years ago. Impartial historians will remember him as a fighter for civil rights, with Dr. King (himself a gun owner, by the way) and with the NRA.

He paid a high price for his ethics and his commitment to civil rights.  How many here have suffered ostracism – in the neighborhood, in the family, in the workplace, or elsewhere – for the same thing?  You are invited to share your experiences here.