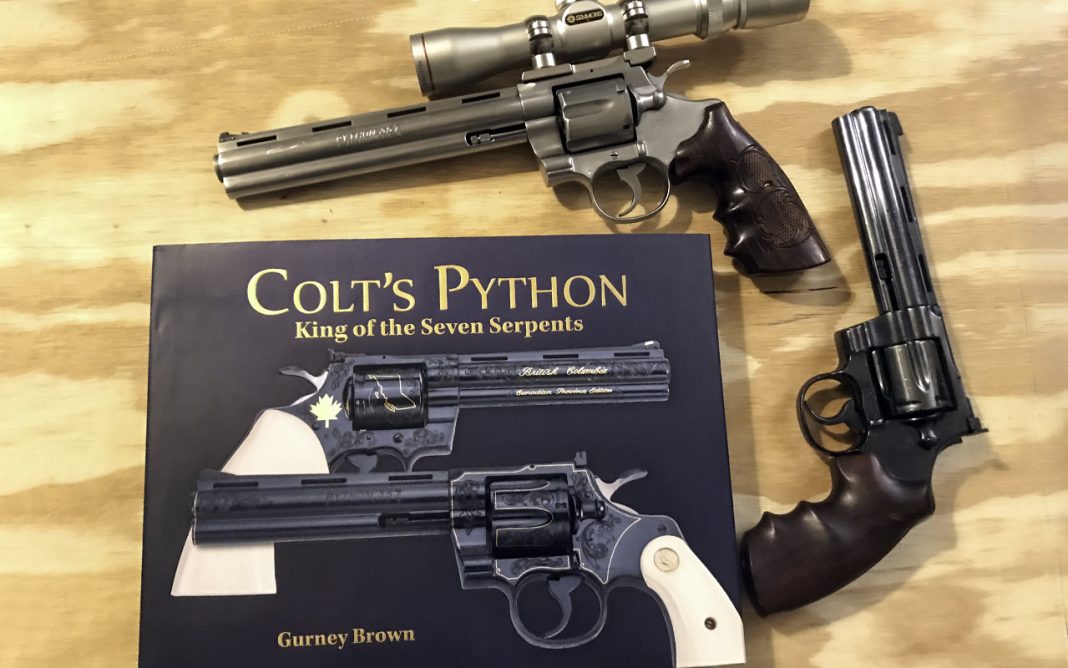 In my last entry here, I reviewed Colt expert Gurney Brown’s beautiful book “The Seven Serpents.” Here, I present his follow-up, an homage to the most widely recognized of those Colt “snake guns,” the Python.

It was, in its time, the flagship of the Colt fleet and widely recognized as the “Cadillac of Revolvers.” It earned a reputation for exquisite accuracy, in part because of the small engineering marvel of tapering the bore by 0.001” toward the muzzle, driving the lead deeper into the rifling…partly because its rifling twist of one turn in 14” stabilized 148 to 158 grain bullets better than the 1:18.75” twist of its arch rival Smith & Wesson in the same caliber…and partly because its “second cylinder hand” design locked the chamber dead nuts solid in line with the barrel as the hammer fell.

The book dedicated to it is “Colt’s Python,” subtitled “King of the Seven Serpents” by Colt scholar Gurney Brown. As lavish a coffee-table book as its predecessor, this one delves deeply into the history of this fine gun.  Only Colt’s most seasoned polishers were allowed to apply its famous Royal Blue finish, using polishing media as fine as talcum powder. Only their most experienced craftsmen hand-honed the actions of every single one of them, giving the Python its famously sweet trigger pull.

Perhaps one reason I enjoyed this book so much is that I have some ego invested in it. I shot my first PPC match with a Colt Python borrowed from my late friend Tom Stackpole.  Back in the day, I managed to nail a running ram at 76 yards with a Python I borrowed from the late Hal Swiggett, and did so double action thanks in large part to its sweet action by master gunsmith Jerry Moran. After that, I went home and ordered my own and sent it to Jerry. I own it still, having worn it as a uniform police service revolver and sometime off-duty gun.  It won a bunch of matches for me including a few state titles.  It was joined by others.  I own them today in four of its five barrel lengths – 2.5”, 4”, 6”, and 8” and hope to one day own one of the uber-uber-rare 3” models.  I am also happy that Mr. Brown chose to include a chapter of my three-part magnum opus on the Python in his book; you can catch the original here.

Thus ends my Python ego trip, now back to a great book. The photography is awesome. Mr. Brown has put in lots of details on special production runs of this gun.  You can salivate over the engraved and gold inlaid variations depicted.  Price? Suggested retail will kill a good part of a C-note, but if you go to www.gundigeststore.com, you may just find some happy discounts there  .

I enjoyed heck out of Mr. Brown’s Python book. It is a salute to American workmanship and ingenuity, and a little bit of a time capsule of a special chapter in the history of guns.