The current edition of Harper’s magazine carries a cover story on concealed carry, illustrated with an Andy Warhol portrait of a High Standard Sentinel .22 revolver…ironically, more of a Backwoods Home utility handgun than a concealed carry piece, but what the heck.

It is a very articulate story from a man who carried a Colt Detective Special .38 for some time, and understood the power and responsibility he carried with it.  In the end, he decided not to carry every day. Some in the gun world see that as a cop-out. I noticed that the author reserved the option to carry it on long drives or in other situations where he felt less secure than usual. In the end, it’s his choice.  Hell, I know a lot of determined, busy Second Amendment Rights activists who don’t carry a gun every day, either, and I’ve known some who don’t carry at all…and there are a few 2A supporters who don’t even own a gun. While I am one of those who does carry a gun daily wherever and whenever it is legal, I don’t think those who choose otherwise are Commies or anything.

I gotta admit, I like that. Our concealed weapon is initially about us, and those we have a responsibility to protect. But it’s also about others, who are present when we are armed and who may be present and even close to the line of fire if any of us every have to draw a defensive handgun for its intended purpose.

Kudos to Harper’s for “Fair And Balanced” factor.

Read the essay. I would link it for you here, but you have to be a subscriber to the magazine to log on. The magazine is on the stands as I write this, though, and should be at your local public library.

And, please, get back to me here at the blog and let me know what YOU think about Dan Baum’s article. 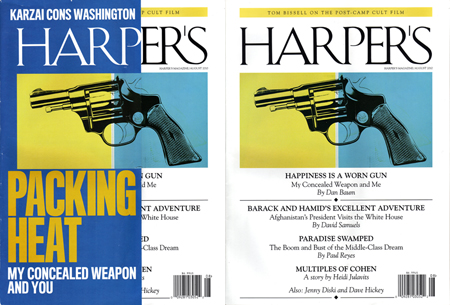