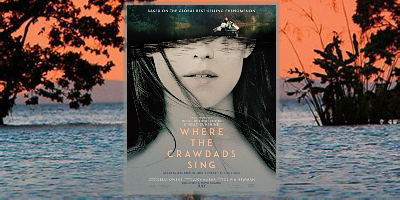 I had been seeing “Where the Crawdads Sing” on bookshelves for some time, and recently – desperate for something to read on the plane, and unable to find something to my usual non-fiction taste – bought a copy to read on the plane. I’m not sorry I did. But ever since Samuel Taylor Coleridge defined “willing suspension of disbelief,” we’ve known it was essential to enjoying good fiction. I found that challenging with this book.

Delia Owens’ novel revolves around a child in a way below poverty level shack in the seacoast swamps of North Carolina, gradually abandoned by her siblings, her psychologically broken mom, and finally, her abusive alcoholic dad. Alone at the age of ten or so, she manages. She evolves into a beautiful but extremely eccentric young woman, the quintessential outsider, dumped on constantly by better-off “townies”; horribly introverted and totally untrusting; and self-sufficient in most ways but inclined more to flight than fight when in danger.

Now, this is a gun blog. What challenged me was this: the only gun that ever appears in the book is the Colt revolver of a court bailiff. One would have expected someone who lived in the swamp to have had at least a .22 to leave behind for the abandoned child. But the heroine, Kya, doesn’t carry so much as a pocket folder, using knives only to chop vegetables to cook on the shack’s wood stove.  One does not survive long in such places without edged tools for common tasks, not to mention self-defense. As she discovers, there can be dangerous humans in the swamp, and certainly dangerous animals: there are a good half-dozen venomous snakes alone to be found in North Carolina, never mind bears and such.

What saved the book was author Owens’ lyrical, evocative writing; her deft plotting; and her ability to create a few characters I could absolutely identify, if not identify with.  She made the nearly impossible seem plausible.

Read “Where the Crawdads Sing” if only for the skillful writing.  Savor the very strong vein of self-sufficiency that runs through the novel.  And see for yourself.

(PS: If you read the book first, the movie flows better for you.)