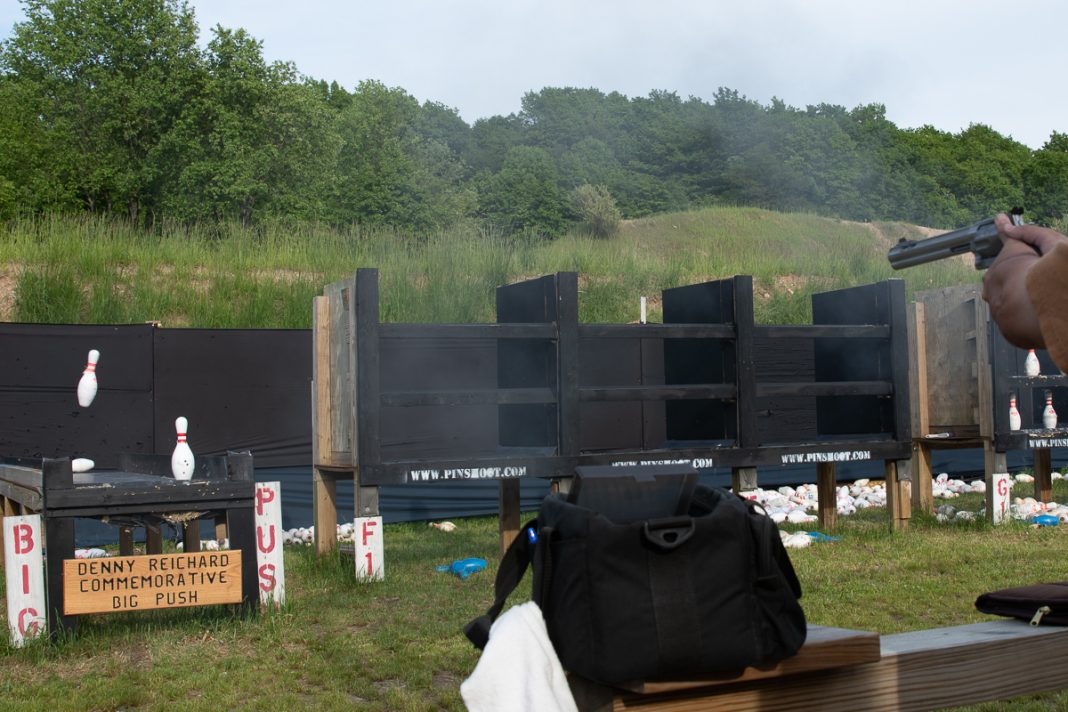 I’m getting ready for my longtime favorite shooting match, The Pin Shoot in Central Lake, Michigan that began in the 1970s as the Second Chance Shoot.  It has something for everyone.

Targets are primarily bowling pins, with steel knock-downs in some of the side events.  The main match is for handguns. Semiautomatic pistols dominate: .45 is the most popular, followed by 10mm and .50 GI, but revolvers can play and there’s even a revolver-only side match, with .44, .45, and .357 Magnum most often chosen.  You need powerful bullets (heavier slugs give more momentum) because the heavy bowling pins need to be shot three feet back to clear the tables. There is, however, a separate event for 9mm pistols where the pins only have to be tipped over.

There’s an event for compact concealed carry handguns now. Most of us use small .45 autos, but the most recent event IIRC was won with a snub-nosed .357 Magnum revolver.

Shotguns are not neglected, with events for 00 or larger buckshot (bowling pins, eight per run) and/or rifled slugs (steel knockdowns at distances up to 100 yards).  Rifles?  You betcha: semiautomatic if you want to win, with AR15s predominating and pistol caliber carbines welcome.

Wanna go social? There are two-person teams for rifle and handgun alike, and three-person teams with two shotgunners and one pistolero.

It’s a spectator sport, with bleachers even.  Now, a bulls-eye pistol match is about as exciting to watch as growing grass. Even a trap or skeet event gets boring: every shot is either hit or miss. In this game, though, there are lots of exciting variables.  “Shoot” pins are mixed among “no-shoot” pins, and hitting the latter gains a heavy penalty.  Pins not hit center roll unpredictably, adding spice to the game.  While pins are being reset, host Richard Davis plays Trivia Quiz with the audience, rewarding each correct answer with a ticket for an end of match drawing.  The whole atmosphere is quite social: up to five days with like-minded people.

Camping is available on-site, and there are lots of summer rental cabins available in this beautiful lakes region. Most attendees bring family.  It’s a great time with like-minded people.  And, there are many prizes awarded for the shooting including lots of guns.  The weekend immediately afterwards I’ll be teaching a two-day lecture class, MAG-20 Classroom, on armed citizens’ use of deadly force about 50 miles away in Cadillac, MI.  The dates for the match are this coming June 14-18 (you don’t have to be there the whole time to shoot), and you can get info and sign up at www.pinshoot.com.  Info on my class can be found at http://massadayoobgroup.com.

Hope to see you at one or both!