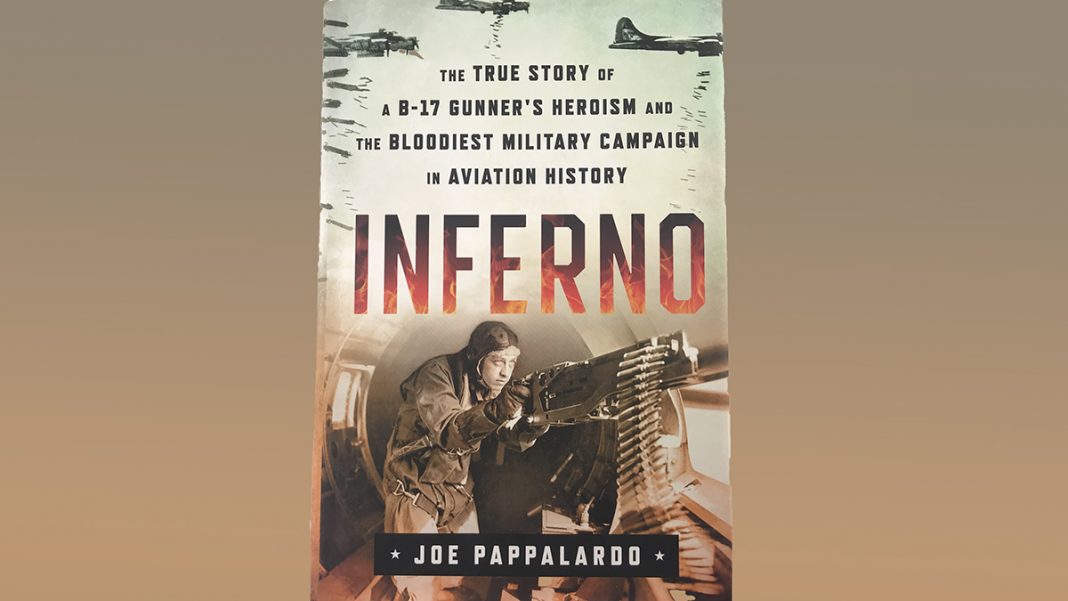 Finishing up our current homage to the veterans and the slain who secured our freedoms in the past, let’s look at the book “Inferno” by Joe Pappalardo. Its subtitle describes it well:  “The True Story of a B-17 Gunner’s Heroism and the Bloodiest Military Campaign in Aviation History.”  The author focuses on Maynard Smith, who won the Medal of Honor for his actions over Europe.

Smith was a classic screw-up, from his early time as a juvenile delinquent to his post-war days, but in the flak-torn skies he found the best part of himself.  His B-17 was shot to pieces and on fire, but after the other men physically capable of bailing out had taken to their parachutes, Smith stayed on board.  He threw flaming debris out of the aircraft and ministered to the wounded aboard, including the pilot, who thanks to Smith was able to bring the aircraft safely to a landing strip.

To do so, he had to crawl out of the bottom bubble of the B-17, where he had been the “belly gunner” fighting off enemy Focke-Wulf 190s with .50 caliber machine gun fire.  A short man – nicknamed “Snuffy” by his fellow airmen because of his perceived resemblance to comic strip character Snuffy Smith – his five-foot-five stature suited him to the extremely cramped globe of the belly gunner’s station.  It was a precarious place to be on a crippled B-17: if the landing gear didn’t come down, the gunner there would be crushed to death when the plane made it to the airfield.

When his B-17 was torn apart and ignited by anti-aircraft fire, Smith had single-handedly extinguished the blaze inside and tended to the wounded aboard, from the tail-gunner to the pilot, who was finally able to bring the crippled aircraft down safely in southwest England.

But the story isn’t just about Smith. Pappalardo speaks of the appalling casualty rate among the bomber crews of WWII, and the strategies of the generals and the responses of the Axis powers.  In this, it is a compelling companion book to the excellent “The Bomber Mafia” by Malcolm Gladwell, albeit with more focus on the folks who had boots on the ground oxygen masks, triggers, and bomb sights in the air.

“Inferno” took me back to when I was able to examine American bombers in the WWII Museum in New Orleans.  Fearsome on the outside, they were amazingly cramped on the inside.  It made me appreciate the hardships of those brave men that much more. Pappalardo’s book is a powerful testament to American courage.