Earlier blog posts on new Smith & Wesson products here in the last few weeks triggered a visceral storm of criticism in the Comments sections for S&W’s continued installation of an internal lock on most of their revolvers. The turn of the key locks the mechanism and renders the gun unshootable, even if it is fully loaded.

S&W has departed from the current policy twice. First, as mentioned here in comments, they quickly sold out a run of Airweight .38 revolvers made on older frames in stock, which did not have the controversial feature. Second, they’ve had good sales of their “lemon-squeezer” series, so called because these models come with a grip safety that the company feels, apparently, makes the internal lock redundant. These are still available, and can now be had in Airweight, the Model 42-1.

My experience and research has shown that spontaneous locking of the guns during firing (characterized as an ILF, or Internal Lock Failure) has occurred, but rarely. It normally involves very powerful guns with very violent recoil, and also very light guns (Scandium, Titanium) firing these extremely hot rounds. The buffeting from the heavy “kick” seems to be what’s jarring the parts out of alignment.  However, one of our readers reported in the comments section that he saw an all-steel S&W spontaneously lock after it was accidentally dropped. Again, a violent impact to small parts seems to have been the culprit.

I know several folks at Smith & Wesson, some highly placed, who don’t much like the locks either. However, prevailing corporate policy says the locks are going to stay for now.

Personally, all the S&W revolvers I carry or use for anything serious are older models without the locks. While I’ve bought several of the lock-equipped later models, all but one were for sport. The single exception is the Model 340 Military & Police, a roughly 14-ounce five-shot pocket revolver chambered for .357 Magnum. This gun has a unique sight concept: a huge XS Tritium Big Dot front, and a humongous U-notch rear.  Developed by S&W engineer Jason Dubois to the best of my knowledge, this arrangement allows the very rare combination of fast sight acquisition in poor light, AND extreme accuracy. This gun puts every shot in one hole at 7 yards if I do my part. I’ve shot hell out of it with hot .357 Magnum loads and never had a spontaneous lock, but I still carry it with milder 135 grain Speer Gold Dot 135 grain +P .38 Special just to be sure. (And because, in a gun this light, the Magnum rounds are just painful to shoot.)

I did not remove the internal lock, for the simple reason that I’ve seen a prosecutor raise hell about a deactivated safety device when trying to establish the element of recklessness that is a key ingredient in a manslaughter conviction. “Ladies and gentlemen of the jury, the defendant was so reckless that he DEACTIVATED A SAFETY DEVICE ON A LETHAL WEAPON, and so arrogant that he thought he knew more about the gun than the factory that made it!”  That’s a mountain I’d rather not have to climb in court, nor debate in front of twelve jurors selected in part by opposing counsel for their lack of knowledge of firearms.

Smith & Wesson makes their Military & Police semiautomatic pistol line with options: the customer can have it with or without manual thumb safety, and with or without internal magazine disconnector safety. I wish S&W would offer the same options with their revolvers, but it’s a much more complicated and expensive thing to do in revolver as opposed to pistol manufacture.  In the meantime, we simply have the choice to buy a different brand. If you have chosen to remove the internal lock feature from your late-model S&W revolver, do yourself a favor and download copies of threads on gun forums in which this issue is discussed, and cases of lock failure are documented.  Keep them on file. If you become the test case, that material may help to defuse arguments that removing THIS particular safety device means you’re a reckless person.

When the sights allow a five-shot group that all hit the aiming paster at 7 yards like this, without even using the Crimson Trace Laser Grip’s projected red aiming dot, Mas can forgive the internal lock. Keyway is seen above cylinder latch on this Model 340 M&P .357. 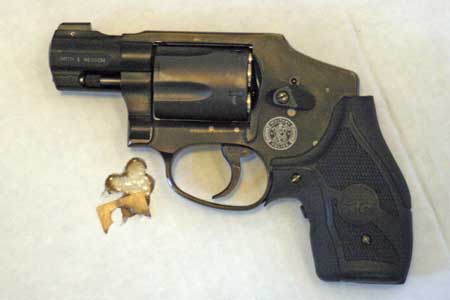