Open carry is the practice of wearing a presumably loaded firearm, visibly.  It normally takes the form of a holstered handgun.  It occasionally takes the form of someone carrying a rifle or shotgun into a restaurant, which has a history of causing restaurant chains to ban or at least decry the practice. There is also what gun writer and blogger Tam Keel  calls “Open carrying at people,” which I think is the province of those colloquially known as “attention whores.”

A few years ago, Mark Walters hosted a three-way debate on the topic on his show “Armed American Radio.” The “pro” speaker came, IIRC, from Georgia Carry.  The “anti-open carry” speaker was a cop from the Midwest who, though generally pro-armed citizen, thought open carry was counterproductive to both the public peace and the Second Amendment cause. I took the middle ground, which I still hold. One the one hand, I would like for every state to allow any citizen who has a clean record and hasn’t been adjudicated mentally incompetent to be allowed to open carry a holstered, loaded handgun. First, because there are some jurisdictions where if the wind blows your coat open and reveals the gun you are legally carrying concealed, a genuinely frightened citizen or vindictive anti-gunner can combine with an anti-gun prosecutor to create a perfect storm of criminal charges for illegal open carry. Second, because if a good person suddenly becomes a stalking victim or the target of death threats, I don’t want them to have to wait up to 90 days (gun-friendly Florida) or six months (the time it takes before a new resident can even apply for a concealed carry permit in California, which for the most part is decidedly non-gun-friendly).  But on the other hand, I don’t think we win any friends for gun owners’ civil rights by flaunting deadly weapons in the face of a general public conditioned to fear guns and their owners by generations of anti-gun media and political prejudice.

I do open carry a few times a year in public, just to gauge typical response, and have done so in jurisdictions from New Hampshire and Connecticut to Washington State. Most folks don’t even notice.   I just got back from a class in Tucson, hosted by Dan Southard and his Gator Farm Tactical training group.  There is no more open-carry-friendly state than Arizona, though Tucson is pretty much “blue yuppie central” on firearms issues.  At the airport hotel, about a fifth of the students open carried, while a majority of the rest were packing concealed.  There were no incidents or complaints.  Interestingly, if you look at the class photo below, you’ll be hard put to spot even the openly carried handguns, including the Glock on my own hip.  Yes, open carry can be discreetly performed. 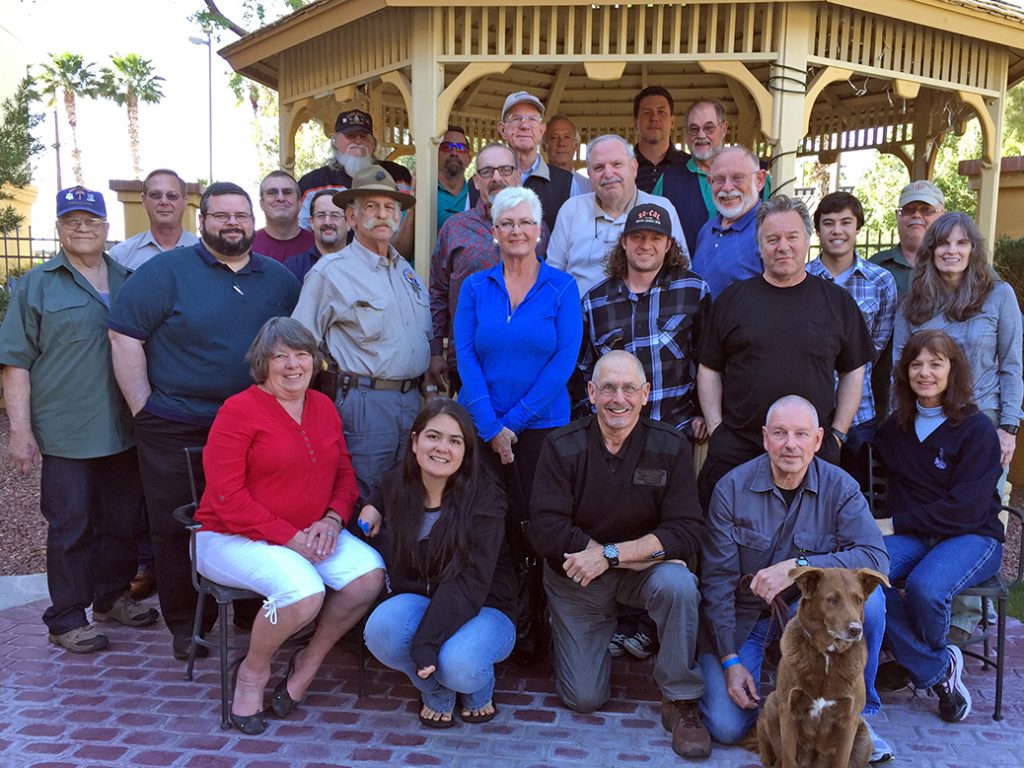 Now, contrast that with this YouTube video, taken by a true attention whore and cop-baiter.  Ask yourself just how much of an ambassador this guy, trolling a school while wearing an openly carried handgun AND a slung long gun, is for the cause of responsible armed citizens. Note that at the end, he and his flaunted guns walk right up to the door of the school, doing a remarkable imitation of Adam Lanza approaching Sandy Hook Elementary School. Note that it was the Bloomberg anti-gun-owner forces who made it go viral.

(First video removed by user link updated to use the original video, not the deleted, edited Demanding Mom’s video. you can visit his Youtube channel here. EP)

Let me ask again…what is YOUR take on the matter?