Next week, my state’s fraternal association for police officers holds its annual conference, which will include a pistol match. It’s the de facto state championship for cops. It’s hosted by a different law enforcement agency each year, so the match is always different. Some years, the rules demand using the department-issue sidearm. Some years, the rules state that you can use any gun you are authorized to carry on duty.

For some, those are one and the same, but for those of us in more enlightened departments, it gives us some latitude. My agency’s standard issue sidearm for the last couple of years has been the Ruger P345 – the high-quality, low-priced .45 caliber semiautomatic that I recommended elsewhere on this blog to a reader who was looking for an affordable .45. Before that, since 1993, we had the same gun’s predecessor, the Ruger P90. I still have my “old” issue gun, so I can use either one if the rules turn out to be “standard issue only.”

My department is more liberal than some. We can carry a high quality double action .45 auto of another brand if it’s on the department-approved list. I have a SIG .45 that occasionally rides with me in uniform. Assorted high quality 9mm and .40 S&W caliber auto pistols are authorized for plainclothes and off-duty carry. For me, these include a Beretta 9mm that I’ve shot in at least three competitions in the past twelve months (won two, placed second in the other) and a .40 caliber Glock Model 22 with eight-pound New York trigger module with which I won the event I’m now preparing for in 2001, 2002, and 2003. Our department even allows cocked and locked 1911-style .45 automatics, if we can qualify at Master level with them. I wear one in uniform occasionally, and came in second at the “state shoot” with it in 2004.

I don’t know yet what the rules or the course of fire will be (they like to surprise us) but I’m told it will be a tough “qualification” course instead of the run-and-gun assault courses that have constituted the match for the past four years. Good news for me, since I “gun” better than I “run.” Since we probably won’t know the exact course of fire ‘til the morning of the match, I figured I’d take a few guns to the range and run them on “Course Seven,” the most challenging qualifier our state has on its books. Stuff like draw, fire three shots strong hand only, change hands, fire three more weak hand only, all in seven seconds. This would be easy with “qualification scoring,” in which the big oval “8-ring” of the police B27 target is counted as 5 out of 5 possible points, and a hit anywhere on the silhouette, even if it would have only pierced the bad guy’s earlobe or shot off his cuff link, counts for 3 out of 5 points. Unfortunately, at the match we use competition scoring, where the mark is a “10-X ring” that’s smaller than a business card, and some of the shooting is from 25 yards away. I can’t remember the last time I ever shot this course in “qualification scoring” with less than 180 out of 180 possible…and I have never shot a perfect 360 out of 360 possible on it in “competition scoring,” nor have I seen anyone else do so.

Aw, the hell with it…I’ll probably just shoot the match with the issue P345. That way, I’m covered even if the rules go strict and I have to use the gun the department gave me. But, you know, there were lessons in this morning’s experience.

The Ruger was the cheapest gun of the batch. Some of them had several hundred additional dollars of custom work in them, action slicking and such. The Ruger was literally out of the box. With some careful shopping you can buy a new one for $500 or less, and get an even better deal on a used one.

Lessons? 1.) A Chevy gets you just as far, just as fast as a Cadillac. 2.) Consistency is good, [though one could argue that consistency is also a key to mediocrity L]. 3.) As I constantly tell my students, it’s not so much about the gun so much as it’s about the shooter, and it’s not even about the shooter so much as it’s about consistent application of proven technique. It was the same guy and the same gun firing the 9-point hits on the 36-round course, as firing the 10s, whether the guns were plain or fancy. The imperfect hits came from the operator’s loss of concentration, not poor selection of tools.

I’ll let you know how it comes out. But in the meantime, tell the rest of us about your experiences in this vein.

The day you discovered that you hit just as many birds with an inexpensive Mossberg shotgun as with a Perazzi that costs more than some people’s homes. The day you realized the vegetables you raised economically in your garden tasted better than the finest high-dollar produce at the Food Boutique.

Validation of values, and lessons of life experience, sometimes come from unexpected quarters. 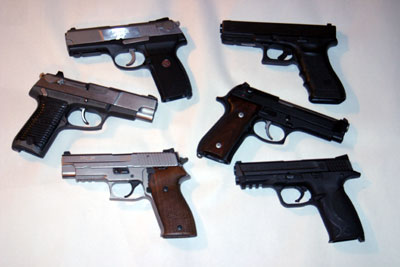 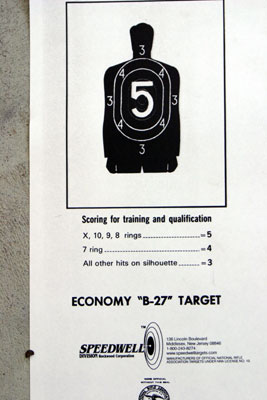 “Qualification scoring” is forgiving with the NRA B27 police silhouette target. Anything inside the competition 8-ring is 5 out of 5 points, “center mass”; 7-ring is 4 out of 5, and anything touching the black is worth 60%. In competition scoring, however, anything outside the 7/4 ring is scored as a miss…even a head shot, since the shooter has missed point of aim by a foot or so. 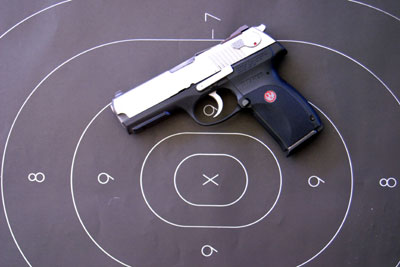 Competition-mode scoring demands more accuracy. Center oval is 10-X tie-breaker, next ring out is worth 10 points, then 9, etc. Anything outside the 7-ring is worth zero, and any late shot gets a minus-10 points penalty. Pistol is author’s department issue .45.