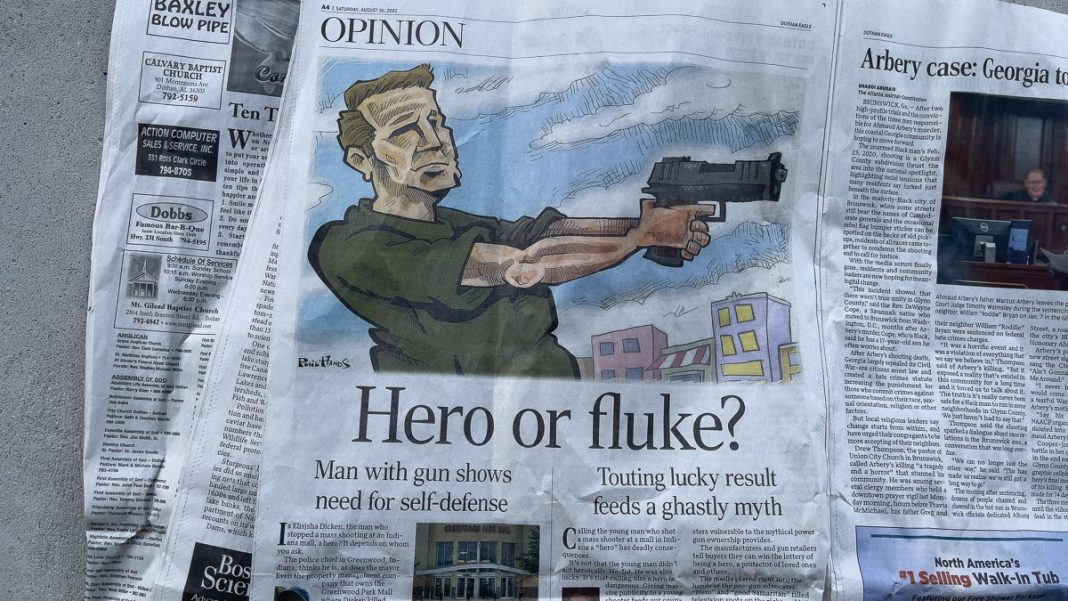 My friend and colleague Steve Sager and I were driving back from a homicide case in Montgomery, Alabama when I picked up the local Eagle newspaper while passing through Dothan. Therein I found a point/counterpoint on the opinion page, reference the case of the heroic young man who stopped a mass murder recently in Indiana.  The paper titled the exchange “Hero or Fluke?”

On the pro-gun side was an essay by 2A stalwart Cam Edwards titled, “Man with gun shows need for self-defense.” Opposing him was a column by a retired psychologist named Robert Pawlicki titled “Touting lucky result feeds a ghastly myth.”

Edwards’ piece was, as always, calm and well-reasoned. But Dr. Pawlicki’s? OMG.

The anti-gunner admitted, “Lives were saved in Indiana. We can be pleased with that,” but immediately followed with “But considering this a heroic deed feeds into the myth that it is smart and manly to own weapons built to kill other humans. It is not.”

First, armed defense has nothing to do with machismo. Within hours of the Uvalde elementary school atrocity in Texas, a woman in Charleston, West Virginia stopped a mass murder the same way the young man in Indiana did. Licensed to carry a concealed handgun, she drew and shot the gunman dead before his AR15 could put a bullet into any of the many innocent people he had opened fire upon.

Second, the psychologist has poor input. He wrote, “The Gun Violence Archive recorded 692 mass shootings last year and 356 through the first three weeks of July 2022. That’s 1,048 mass shootings. Where were the remaining 1,047 ‘heroes’ to save the day?” The psychologist’s source seems to include drug dealer shootouts and such; FBI puts mass shooting statistics MUCH lower.

Thirdly, I can tell that psychologist exactly where the heroes were that could have “saved the day.” They were in states where it is reasonably easy for law-abiding citizens to legally carry guns. They were unarmed in places that people who think like Dr. Pawlicki have made into “gun free zones,” which translates to “hunting preserves for psychopathic murderers, where the intended victims can’t shoot back.”  Perhaps the good doctor would like to do a little research: it would have shown him the same.

Dr. Pawlicki says the young man in Indiana was not a hero. The chief of police where it happens says he was in fact a hero.  I agree with the chief.

And so does anyone who rationally puts the saving of innocent human lives at a higher priority than cleaving to virtue-signaling born of political identity.