This time of year, I should be writing something about how important it is to get out and vote on Tuesday…but you know that already, and I won’t insult your intelligence by reminding you.  I can tell you, though, it was a topic of discussion among eight of us this weekend, who rented a comfortable 14-passenger van for an eight hour round trip to the Georgia State Championships of IDPA shooting, splendidly run by Capel English at the Greater Atlanta Defensive Pistol Association.

One of our number, Outdoor Life writer Chris Christian, had yelled “Road Trip!” when the idea originally came up, and that became kinda the theme for the whole thing. The big white Ford F-350 van instantly became known as “the short bus,” and if you’d heard the jokes and laughter on the long ride, you’d understand.

The match itself included 17 pneumatic targets and numerous other challenging “marksmanship problems” for the shooter to solve while the electronic timers silently clicked the seconds away. A bad guy target that dives to one side, then literally slithers behind steel cover isn’t something you can easily set up in your back yard for practice. A good, and instructive, time was had by all.

En route home, we came upon an eighteen-wheeler that had just ended up on its side, blocking every lane on that side of the Interstate. Stopped cars were stacking up, all but one containing people who simply sat in safety and drummed their fingers impatiently on their steering wheels. Only a single good Samaritan had gone to assist: helpless to do more by himself, he was talking encouragingly to the driver, who was trapped in his cab.

Jon Strayer swung “the short bus” across the grass at roadside and in behind the lee of the wreck, and in a moment the lone Samaritan had eight shooter-folk assisting. Bud Deese, one of the more athletic among us, climbed atop the overturned truck and attempted to open the driver’s door, but it was locked from the inside. At ground level, petite Terri Strayer worked her slender, bare fingers between the edge of the safety glass and the twisted steel bodywork, and a group effort completed the removal of the already shattered windshield. We were able to safely extricate the driver through the opening where it had been, before the first emergency siren became audible in the distance. He was shaken but uninjured.

We drove on, happy to have been of assistance. The match had been fun, but the companionship had been the high point.  I was happy to have been one of the eight “gun people” who stopped to help, and not among the many more fellow citizens who had been content to turn up their car stereos and ignore a trapped driver who might have desperately needed some assistance.

People like this make me proud to count myself a member of the “Gun Culture.” 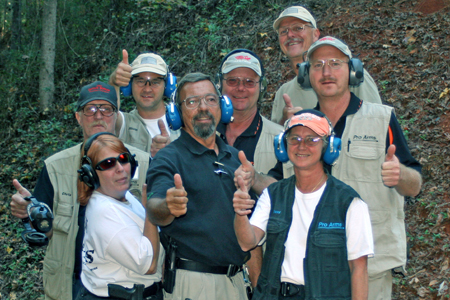 Bud Deese, shown here “advancing on a threat” with his Springfield XD 9mm, found himself hours later atop an overturned semi tractor-trailer working to extricate driver trapped after an accident on the Interstate. 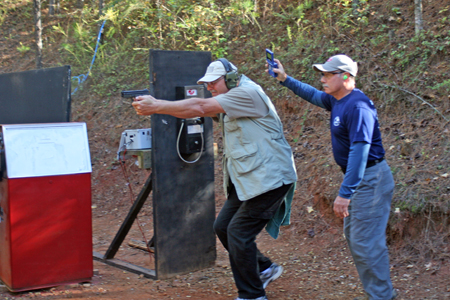