One of my favorite stops on my teaching tour every year is the Sand Burr Gun Ranch in Rochester, Indiana. The facility is a shooting park with rustic classroom, five ranges, and a gun shop that makes you feel as if you’ve taken a time machine back to the 1950s. Founder Denny Reichard does his gunsmithing there, doing action smoothing work that’s as good as you’ll find anywhere in the world.

The resident teaching crew, for the most part, are gun geezers, and they carry classic Smith & Wesson large caliber revolvers. Well, “when in Rome…”  For the first of the two classes I taught in June, I alternated between two Model 625 S&W revolvers, chambered for the .45 Auto cartridge and quickly reloadable with six-shot moon clips. Denny’s trademark gun is a 6” barrel S&W .44 Magnum that he has carried for most of his 36 years of police work that will soon end in honorable retirement. (He’s kinda slowing down, and only carries the one. For much of his career, he carried two at a time. He won the Indiana State Action Shooting Championship several times with one or another of those Dirty Harry guns. The difference was, “Dirty Harry” shot blanks. Denny carries 180 grain Magnum hollow points that leave the long barrels at 1600 feet per second).

Also on the crew were Dave LaRue and George Voltz. George was carrying a Reichard-tuned Model 629 S&W Mountain Gun in .44 Magnum, lightened for concealed carry with a Reichard-installed Scandium cylinder. (George jokes that since he’s old and all, he needs to carry less weight or he might break a hip.) Dave is content with a .45 caliber S&W with moon clips similar to mine, a Thunder Ranch Special tuned by Denny with classic-style wooden stocks cut to fit his hand.

As they said in the first “Die Hard” “Lethal Weapon” movie, revolvers are what a lot of old guys like to carry. Only six shots…but six for sure, and if you use these large calibers, six that hit hard. With roughly a couple of centuries of handgun shooting experience between us, we’ve learned to hit what we shoot at, and have accumulated a collective history of doing so. When you figure out how to master a relatively heavy double action trigger pull, you’re better prepared to teach the next generation how to distribute trigger pressure on their 21st Century “automatics.” Geezers are supposed to pass on The History Of The Old Ways, after all.

If we hadn’t been so tired after each day of class, we would have gone to the park and sat on those wooden benches and talked about old times, as befits people of our years. 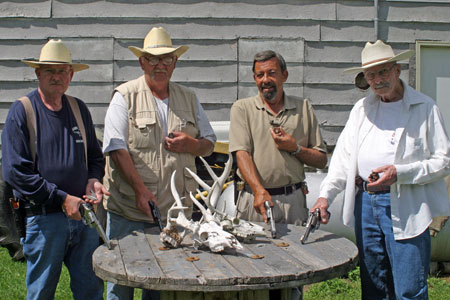 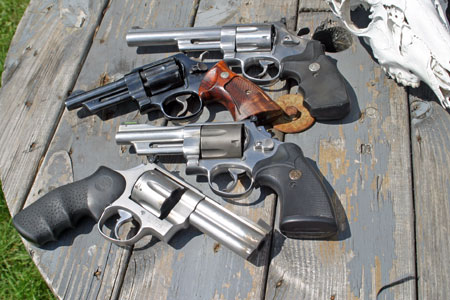 On the cusp of retirement, Denney Reichard leads a parade in the city he serves, Rochester, Indiana. On his hip is his .44 Magnum duty gun, in a holster of his own design. 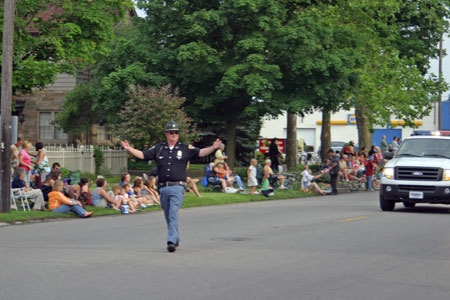