It has become a tradition that on the day before the SHOT Show officially opens, media can live fire with newly introduced guns and at noon, the range is opened so attending dealers can do the same.  The host range was the Boulder City Rifle and Pistol Club.

The new shotgun that most got my attention was the Super Black Eagle, the old model enhanced with changes to the bolt mechanism to keep it from being knocked out of battery if the user accidentally bumps the operating handle rearward.  The feedway to the magazine has been relieved to keep from catching fingertip or glove in the shell lifter.  Extended bolt handle and bolt release also make things easier for cold, gloved hands in duck blinds.  Finally, I like that the comb of the stock has a soft, cushiony cheekpiece.  An excellent example of a manufacturer tailoring a product to needs the end user has determined in the field.

In rifles, the feature I liked most was the bolt operating handle located forward on the left side of the receiver of Savage’s first AR15 clone, the MSR, which in their catalog stands for Modern Savage Rifle instead of Modern Sporting Rifle.  It’s somewhat like operating an FN FAL. Southpaws and righties alike will probably find it much more ergonomic than the rear-mounted T-handle on Stoner’s original and now ubiquitous AR15.  I first saw this feature a few years ago on an Arizona-built AR15, the American Spirit brand.  The feature hasn’t caught on as much is it deserves to; maybe Savage’s greater name recognition and advertising budget will help there.

Also, more long range tactical rifles on display than ever. Which, in this day and age, is a lot.

In handguns, the greatest interest seemed by be generated by the new Hudson pistol, a 1911-ish frame with very easy trigger sitting under a Glock-like striker fired barrel/slide assembly. With a low bore axis to begin with, muzzle jump is further reduced by burying the recoil spring and guide more deeply below the barrel.  Looks funny, shoots great. I’ve ordered one for testing.  The most interesting revolver by far is the first double-action six-shooter Colt has produced in many years. Dubbed the Cobra, it’s actually more like the old Cobra’s progenitor the Detective Special in that it’s all steel.  Lockwork and overall appearance are somewhat similar to the last of the small frame Colts of the past, the SF/VI and Magnum carry. Available to start only in .38 Special, it comes with Hogue grips and interchangeable front sights (fiber optic to start, night sight module coming soon). The most significant design improvement is a trigger guard extended to the front to allow a gloved finger. On most double action revolvers, particularly these small-framed ones, the thickness of glove material often blocks the trigger’s forward return, and renders the five- or six-shot revolver a single shot.  I tried the new Cobra with gloves and was pleased with how it worked that way. Got one of those coming too.  Action is VERY nice.  Manufacturers’ suggested retail prices are about $1149 for the 15-shot Hudson 9mm and $699 for the new Cobra revolver.

The Evil Princess demonstrates the controlability of the new Hudson 9mm pistol. Spent casing from last shot is airborne, muzzle already back on target. 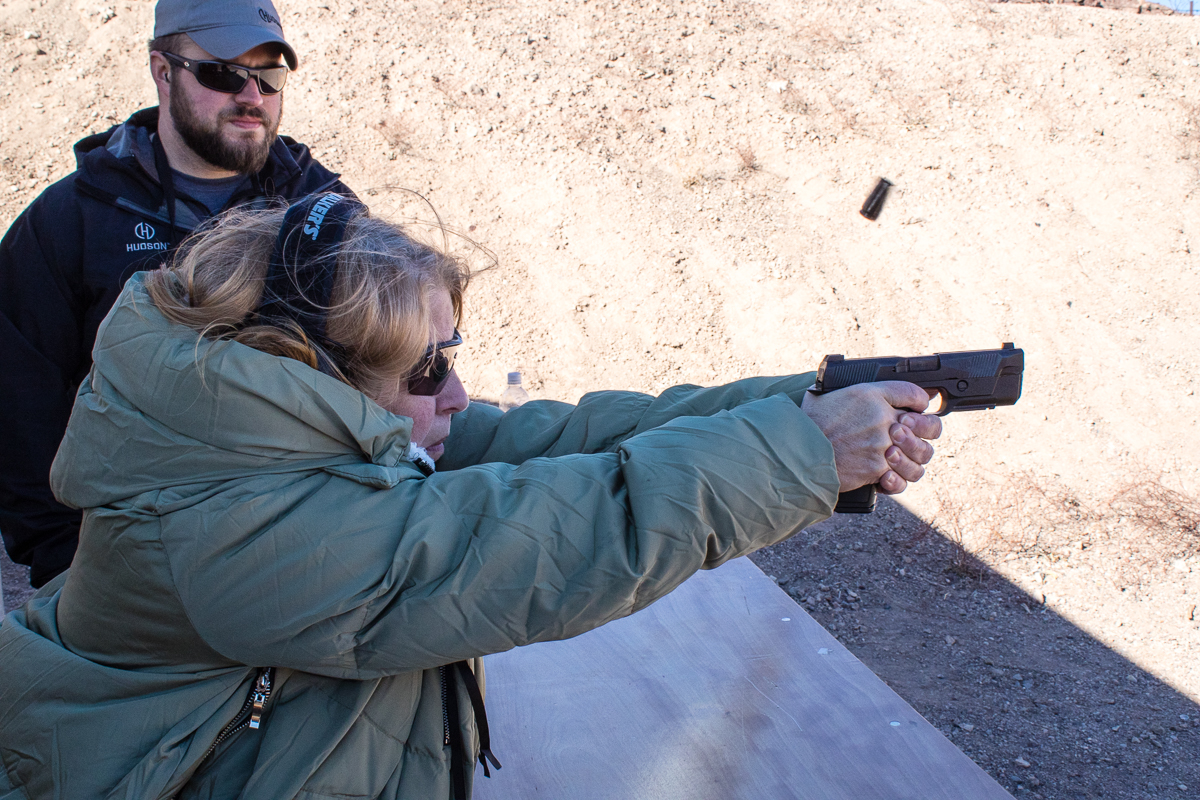 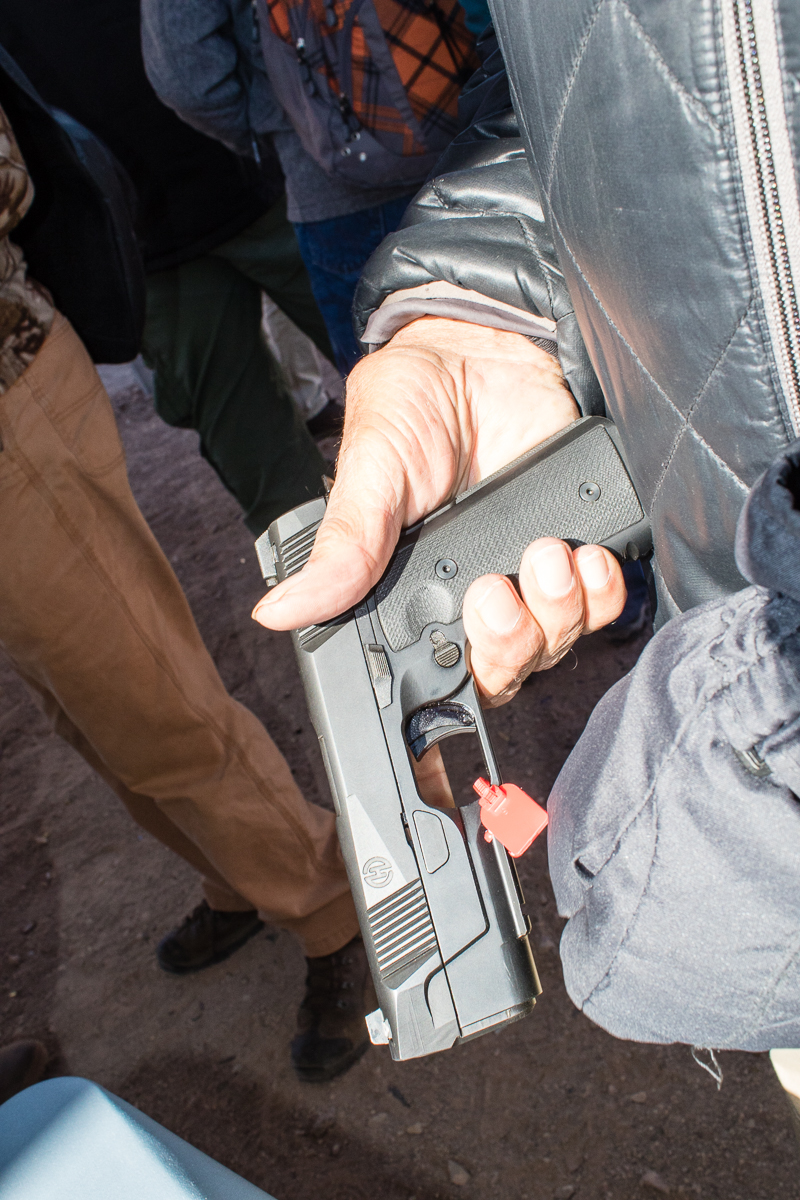 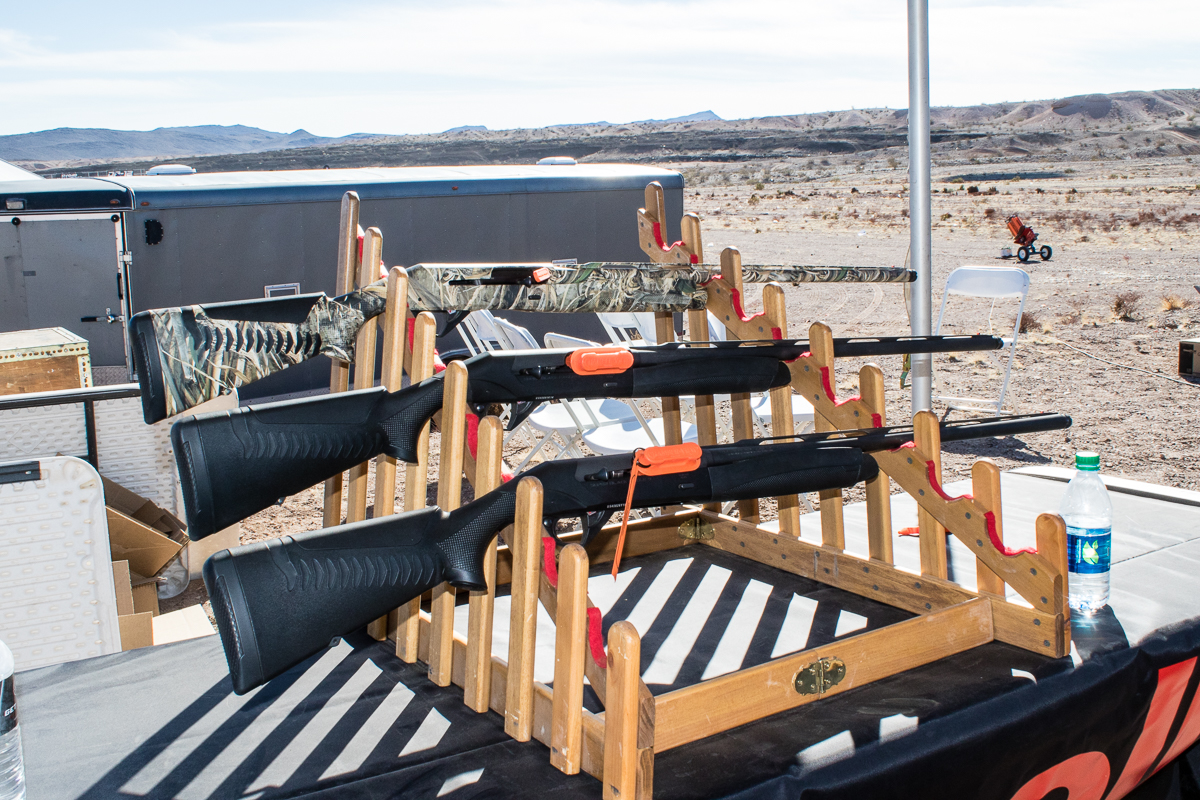 …and this very soft cheekpiece on the comb of the stock is a welcome “face-saver” with heavy loads. 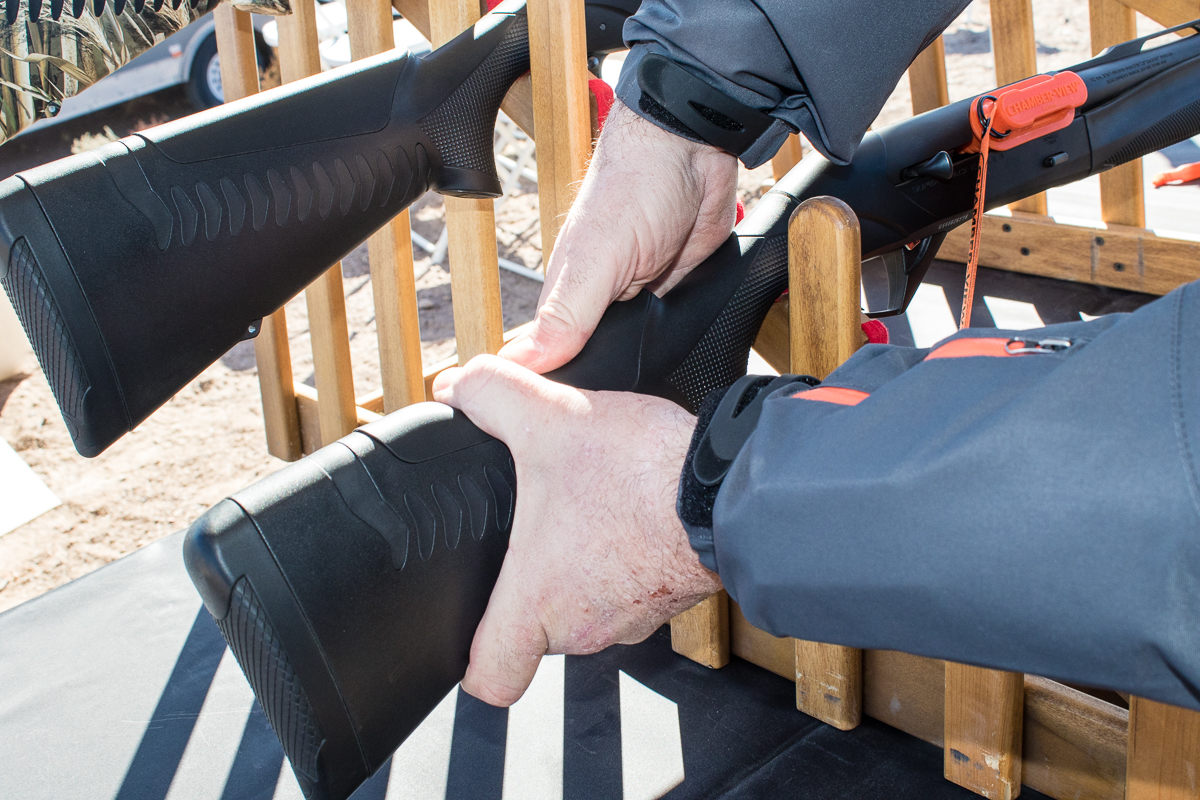 Lotsa new tactical precision rifles, including this DAN in .338 Lapua… 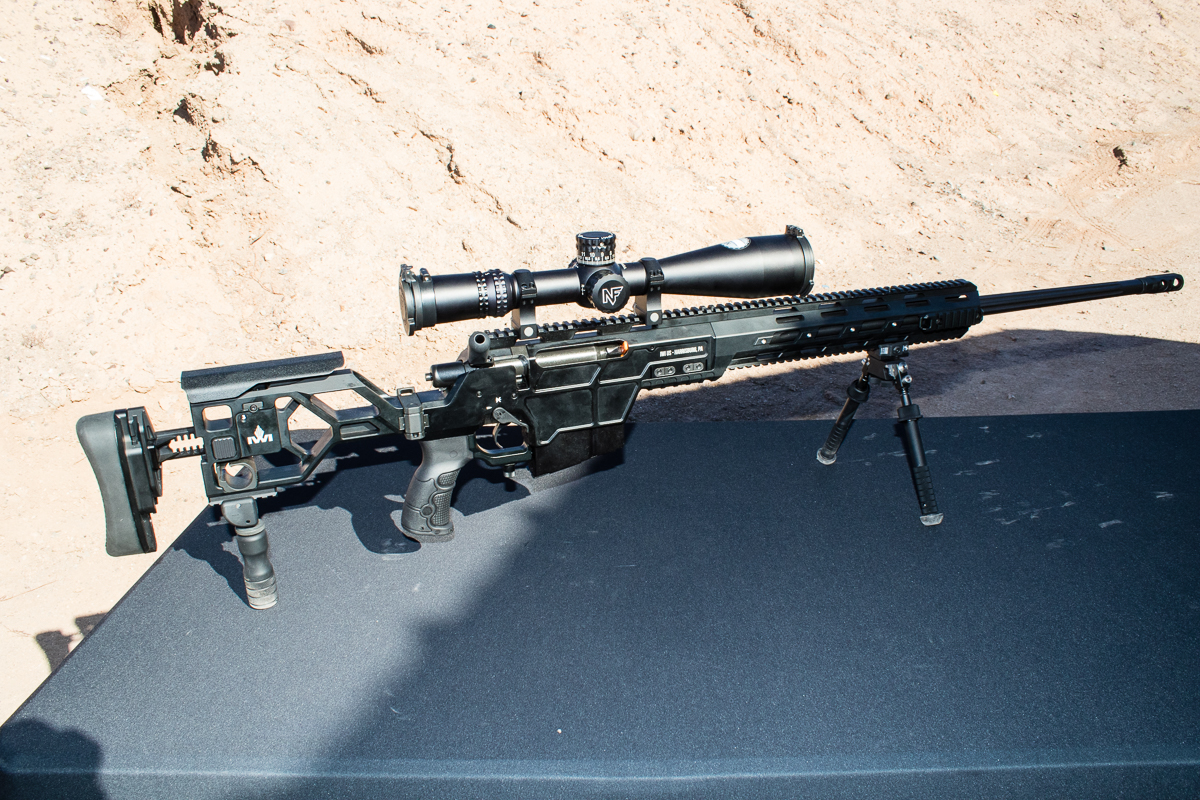 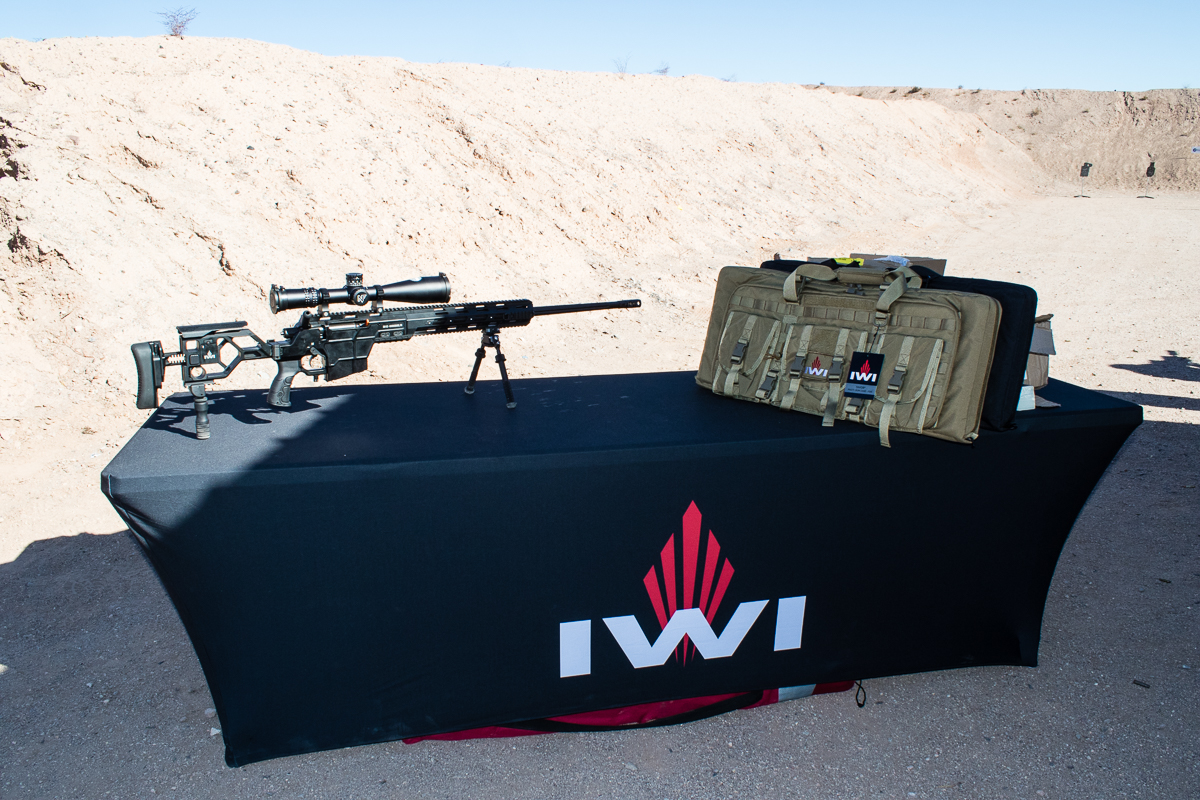 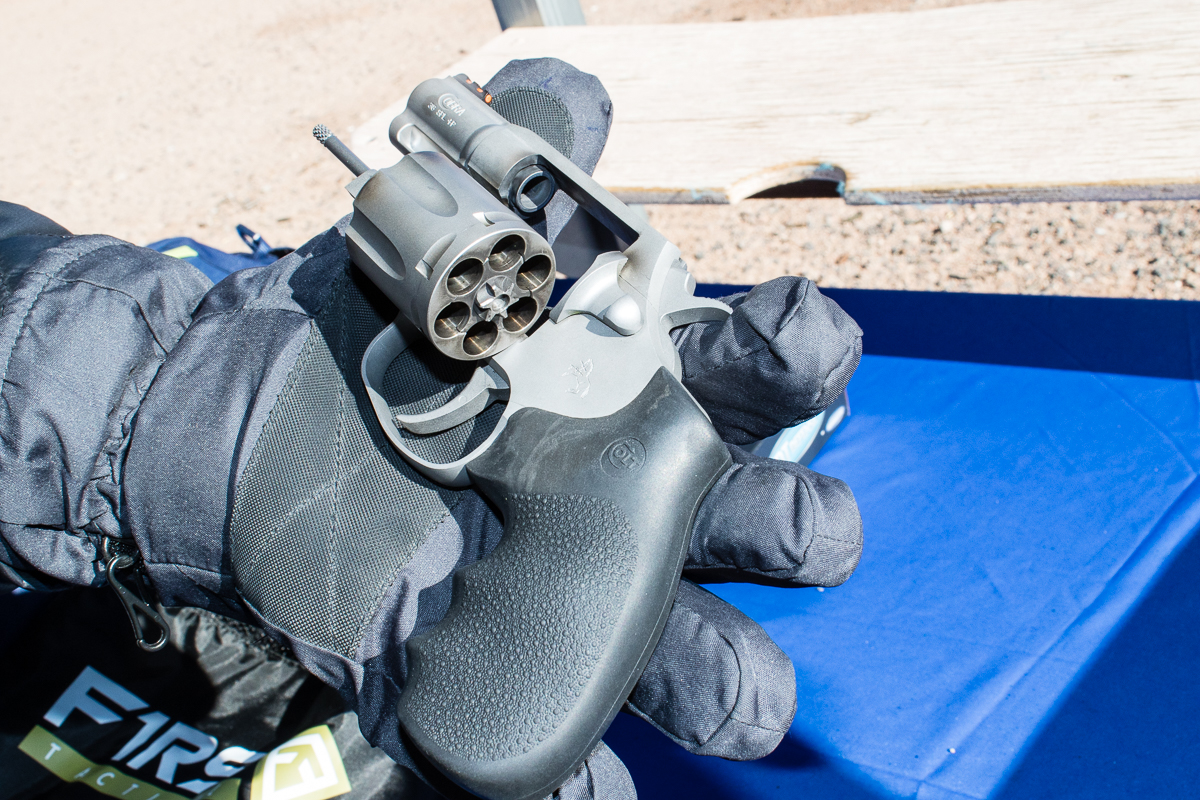