We’ve been waiting for some time for the long-promised response by President Obama to the mass shooting atrocity in Tucson.  A few days ago I was in the Tucson airport waiting to board a flight that would take me to an officer-involved shooting trial on the east coast, when I read in the local paper that the shoe had finally dropped. See it here: http://azstarnet.com/article_011e7118-8951-5206-a878-39bfbc9dc89d.html

Huh. Curious that he would do it in the form of a written, nationally distributed op-ed piece instead of a speech.

NRA does not seem enthusiastic about what was presented by the White House as an even-handed look at a complex issue. (That will by my understatement of the month.) Certainly, his comments that people like psycho killer Jared Lee Laughner need to be identified in hopes of keeping them from arming themselves, will win agreement from many. President Obama was clearly as concerned with placating those of us on this side of the issue as with throwing a bone to his Brady Bunch Base.

However, even the leaning-to-port Huffington Post sees this as a harbinger of an attempt by the Chief Executive to sneak around the end of the field and implement unwanted “gun control” without having to run it by those pesky elected representatives on Capitol Hill: http://www.huffingtonpost.com/2011/03/15/obama-gun-laws-congress_n_836138.html

Does the President’s carefully crafted message give reason to HOPE that a vehement and very powerful opponent of gun ownership has CHANGED his views? Or are we hearing a ghostwriter’s weasel words?

What’s YOUR take on the matter?

Some cool Arizona folks taking a hands-on course in armed self-defense in Sierra Vista, an hour or so out of Tucson. 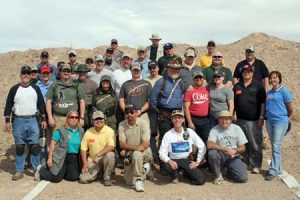