As we wait to learn more about the mass murderer in Tucson – and as we extend thoughts and prayers to his victims and their families, and congratulations to the four courageous citizens, one of them armed, who stopped the massacre – we saw people with their own political agendas dancing in the blood of the victims before it had time to dry at the murder scene.

Even reasonably civil discussions like this one on NPR ignored a couple of 800-pound gorillas in the studio. One, of course, is the fact that a man who carefully plans what he calls in his own handwriting an “assassination” is bent on violating one of the sternest prohibitions in the history of civilized humanity, and is not likely to be deterred by more gun laws. That other gorilla is the fact that you can only prevent atrocities like this by segregating dangerously aberrant people from the rest of society, and that opens a Pandora ’s Box of mental health issues, privacy rights, and Orwellian images that few in this society are prepared to deal with. We are, after all, a society that buries mental illness so deep that a fruitcake like this guy can pass an FBI check to buy a gun.

So, instead, we see ridiculous claims: “That damn Palin!” “Those damn Tea Party people!” Yes, Palin had a diagram with “crosshairs,” not on an image of the wounded Representative, but on her district. LOOK AT THE PICTURE! 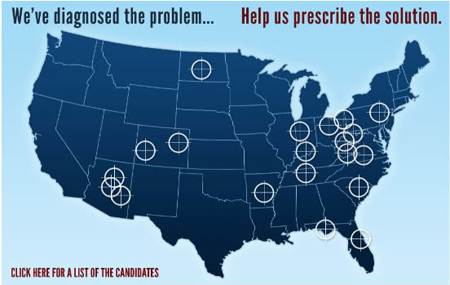 But the far left Daily Kos, which apparently didn’t find representative Giffords listing far enough to port to satisfy them, proclaimed her “dead” and published this image: 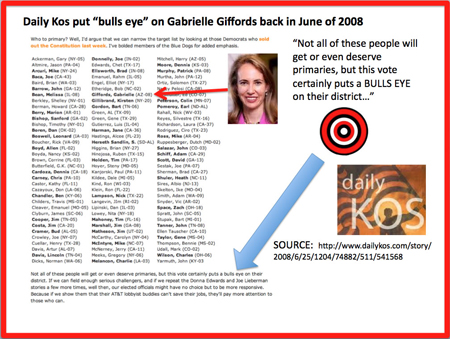 And our disingenuous friends the Brady Bunch used the crosshair motif this way: 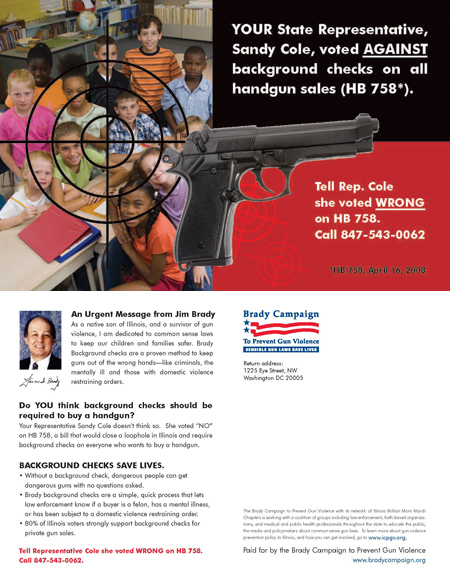 Gimme a break – on both sides. The bullseye, the crosshair reticle, the very term “targeting the opposition” have been common imagery in business and politics in America for as long as this old man has been around. Each party “targets” its opposition. Ford and Pepsi “put their crosshairs” on General Motors and Coca-Cola. Our current Democrat President said during the 2008 campaign, “If they bring a knife to the fight, we bring a gun.”

Yes, there has been genuine hate speech…and the left has brought its share. Michelle Malkin compiles examples for you HERE.

And if the bullet that felled Giffords, a pro-gun, pro-closing-the-borders Democrat, was supposed to have been launched by right-wing propaganda, can someone square that with the fact that the killer’s fractured mind is obviously somewhere to the left of Chairman Mao?

There are complicated issues here. Ironically, there’s only one simple answer, and that would have been for one of the good guys to get these crosshairs into this sight picture, and press the trigger in time. 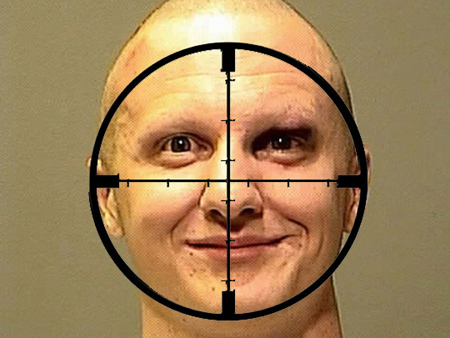