Richard “Red” Nichols was lead designer at the Bianchi holster company for many years.  I’ve known him for decades: he was often in attendance back in the days when I shot the Bianchi Cup, and I’ll never forget him taking me and some other writers on a fascinating tour of the factory in Temecula, California. 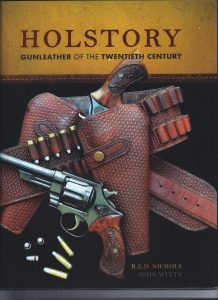 He and collector John Witty have just come out with a fascinating book called “Holstory,” the title being a clever play on “history of holsters.”  Being on top of this topic more than most folks, I was surprised at how much I learned between its strikingly photographed covers.

For example, I had known of famed early Twentieth Century gunfighter Tom Threepersons and his holster design, but didn’t know the details of all that went into those scabbards, nor the fascinating tale behind the identity confusion that occurred between him and Canadian rodeo champion Tom Three Persons.

Much of the value of this book is in the richness of detail.  The complicated relationship between mid-Twentieth Century New York holster-maker Chic Gaylord, some of whose designs we still use today, and his controversial protégé and successor Paris Theodore, for example.  I had grown up seeing pictures of the legendary gun expert Elmer Keith doing fast draw exhibitions drawing big twin Smith & Wessons at once from mirror image Berns-Martin breakfront holsters.  It turns out that those classic old revolvers were fraternal rather than identical twins: one is a Triple Lock .44 Special, and the other, a .38/44 Outdoorsman.  I had never noticed that the cartridge loops integral to the rig were in two calibers: a row of .38s for the Outdoorsman, and another of .44s for the Triple Lock.  This rig not only still exists, but appears on the striking cover of “Holstory.”

More insider info on this project can be found at the always-interesting Smith-Wesson Forum, here. The book can be ordered from here.  At the latter website, you can find an abundance of well-researched history on related matters, and also examples of Nichols’ own fine holsters that he makes today, some of which I’m proud to own.  Lavishly illustrated and published books are expensive. So are laboriously researched tomes on niche topics.  This book is both, which is why “Holstory” will cost you a C-note, but research sources in narrow areas of interest commonly cost that much or more, so I think it’s a good value.

I’m still trying to figure out whether to put my copy in my research library, or on my coffee table.

PS: I am reliably informed that if you order promptly, you should have gift copies of “Holstory” in time for Christmas.