As a teenager, I discovered “turkey shoots” in New Hampshire. Turkey shoots are run different ways in different places, but in the Granite State they revolved around shooting full-size deer targets at 100 yards, with “standing deer” and “running deer” events. It was a rare hunter with the time and money to set up the motor-and-pulley arrangement for the running target on his own, but a fish and game club could do it, make a profit for the club, and give us hunters much-needed experience in leading fast-moving venison on the hoof a hundred yards away. If you beat the other shooters on your relay, you took home a frozen Butterball turkey for each win. To my way of thinking, that was and is A Good Thing. Later, in the early ‘90s, I had the pleasure of shooting the BuckMasters match against 3D deer targets that fell to bullets. Even better! (Later, Yanks would import silueta from Mexico, where shooters stood “offhand” with hunting rifles to knock down life-size steel silhouettes of game critters.)

I had given up bird hunting when Sporting Clays came along, and have always regretted that this game wasn’t around when I enthusiastically took my shotgun afield after partridge and pheasant. In Sporting Clays, the “clay birds” fly in realistic settings and at unpredictable angles, including scudding along the ground. Will that make you a better shot on “the real thing”? Can anyone even DOUBT?

Making my living on the self-defense side of the gun world, my shooting competition nowadays revolves mostly around handguns. The International Defensive Pistol Association (www.idpa.com) is where I get most of my match-level trigger time. I try to shoot at least four major events a year, and at least one local match every month. Entry fees range from $12 to $20 at local level, up to $165 for the biggest matches that have lots of valuable prizes. I’ve won my share of guns, etc. at the latter, but it’s not a for-profit thing except for a handful of the nation’s very best professional shooters, of which I am not one.  What these matches DO accomplish is to give you training realistic enough to be authentically replicated experience…and put you under major pressure doing it. That combination is priceless for building skill when you really NEED the gun for its intended purpose, whether that purpose is feeding the family or saving the family.

Last month I got to shoot two major IDPA matches, the Indiana State Championships and the Carolina Cup, experiencing about fifteen “replicated gunfights” at each.  At a range near Kokomo, Jeff Brown and his super crew ran us through replays of the famous scene in the movie “Collateral,” and timed shooting with each hand, and a whole mess of “runnin’ an’ gunnin’,” including Jeff’s favorite target, the Rattler, which jerks violently and unpredictably away from your aim like a spastic crackhead, and a devilish “clamshell” target array that gave you only about one second to shoot the hostage taker before the hostage was pulled in front of him.  (Big props to Larry and Stacey Piekarski, who lent one of their own cars to a couple whose brakes had gone out, and then fixed the brakes!). In North Carolina, Frank Glover and his famed Carolina Cup crew had us shooting “outlaw bikers” out from behind REAL motorcycles, and shooting “terrorists” on a REAL schoolbus. Info on each great venue is available at www.idpa.com, along with links to a local club that’s probably within driving distance of where you are right now.

There is more realistic practice, training, and competition available today than ever before. It’s a great time to be a shooter who wants to get better.

John Serafin has used a shovel to “knock out” target in foreground, then run to cover to engage multiple threat targets, including the “swinger” second from right. His pistol is a 9mm 1911. 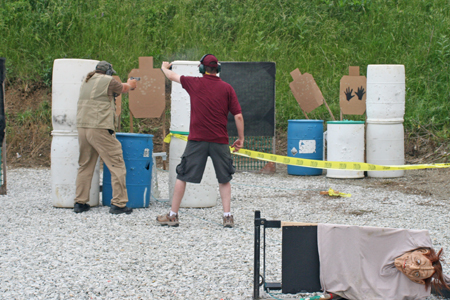 Gail Pepin raises her Springfield XD(m) 9mm as she runs past “innocent bystander”  to cover to get a clear shot at “bad guy” downrange at Indiana State shoot. 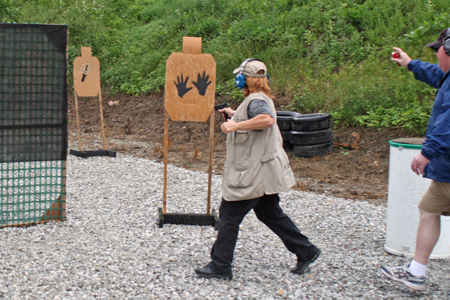 Suzeanne Holleman double-taps target at left on the run before entering schoolbus to engage “hostage takers” at Carolina Cup. Her pistol is S&W M&P Pro in 9mm. 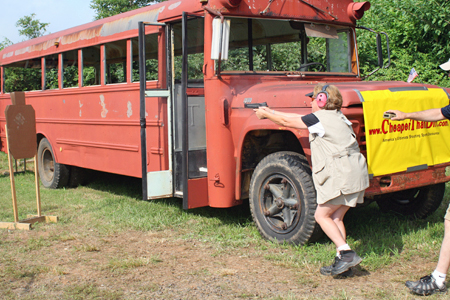 “Attacked” while mowing her lawn, Cyndi Delena abandons the machine and draws her S&W 9mm from behind a “tree” at Carolina Cup. 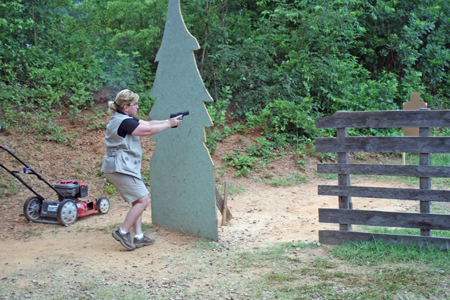