So…I just finished teaching a class with a Smith & Wesson .357 Magnum revolver as my teaching gun…and out of 21 students, only one was using a revolver instead of a semiautomatic pistol. He was 78 years old.  This told me something.

That said, though, he finished with a score of 220 out of 250 possible with his snub-nose Ruger SP101, and there was at least one instructor on the line with the same kind of gun to show him how to work it, since the “least modern gun” on the hips of my staff instructor cadre was a 1911 .45 auto, and all the rest had Glocks, S&W M&P autos, or the Springfield XD. Today, I start an advanced class, and have seen the writing on the wall: I’ve switched to a polymer Glock 26 9mm autoloader as my teaching gun for this week.

About ten days ago I was in Phoenix, competing in the South Mountain Showdown, and using the S&W in Stock Service Revolver class. Significant Other and I found ourselves shooting one stage with some other revolver fans. “Cool,” I said, “we’re in a nest of revolver shooters.”

“Or maybe a gaggle of revolver shooters,” she suggested helpfully.

“A cylinder-full of revolver shooters?” I ventured hopefully.

“Or a speedloader of revolver shooters,” she said supportively.

Now, I know the proper term.

We were obviously a “museum” of revolver shooters.

Help me out here…I’m not the LAST dinosaur, am I?

It’s hunting season, for Heaven’s sake. How many of you are going to be hunting birds with a good old classic double barrel shotgun, and how many are going after the Thanksgiving turkeys with a shotgun made of Fiberglas and synthetic stocks with Sorbothane recoil pads?  How many will be stalking the winter venison with good ol’ bolt action or lever action rifles made out of blue steel and walnut, and how many will be using something that’s plastique fantastique and tactique-al?

Like that guy said to Clint Eastwood in the first “Dirty Harry” movie… “I got to know.” 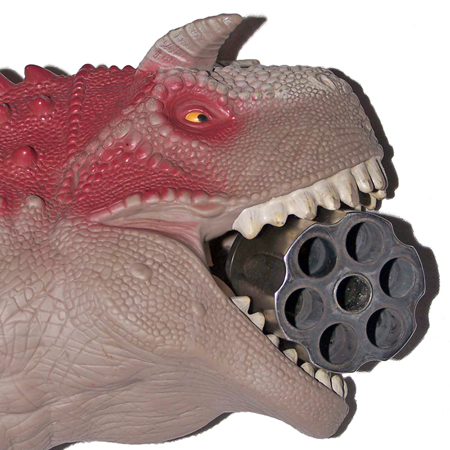