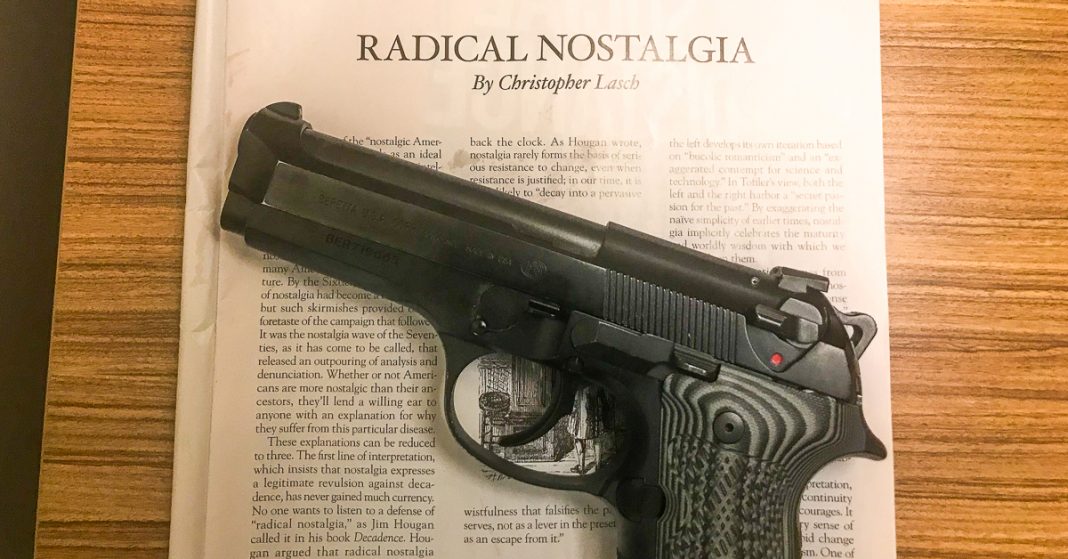 Harper’s magazine is not what you would call pro-gun, but I found some inspiration in its July 2021 issue, particularly the article “Radical Nostalgia” by Christopher Lasch.  The article itself is a bit of nostalgia, from 1984 in the magazine’s “From The Archives” section.

It had nothing whatsoever to do with firearms or Second Amendment rights, but it included a quote from Jim Hougan in his book “Decadence.” Lasch said, “As Hougan wrote, nostalgia rarely forms the basis of serious resistance to change, even when resistance is justified; in our tie, it is more likely to ‘decay into a pervasive wistfulness that falsifies the past and serves, not as a lever to the present, but an escape from it.’”

Being who I am and doing what I do, that streamed my consciousness to folks I know who choose their guns more from emotion than from tailoring tools to tasks.  How many of us ever go duck hunting with an ancestor’s double barrel shotgun, even when we know the third shot from something more modern might put more waterfowl in the freezer? Or with that iron-sighted lever action .30-30 when we know that a more modern scoped rifle will give us more range for distant deer and increase our odds of taking home winter venison?

For those of us who learned the tradition of hunting when we were very young, and when the object is the hunt more than the kill and the meat, nostalgia is a big part of it…and the guns of our youth, and our forbearers is part of that experience…the nostalgia becomes one of the most satisfying elements of the hunt.

Why should people say “nostalgia” as if it’s a bad thing?

At the same time, we have to balance practicality with nostalgia. When I read that article, I was carrying and teaching with a Wilson Combat-customized Beretta 92G Compact Carry 9mm pistol. I started shooting the Beretta 92 in the 1980s, back when it was the hot ticket with cops and was adopted by the US armed services in the mid-‘80s. Today, most cops carry striker-fired polymer pistols and a few years ago the US military cashiered it in favor of the SIG P320. Does that make it – and me – obsolete? Actually, no: it is extraordinarily accurate and reliable, has design features I appreciate, and serves me well in the modern environment.

I tailor the tool to the task. I had two such Berettas in students’ hands in my last class, and one reason I change guns frequently is to stay familiar with all the many guns my students bring “to gun school.” The first quarter of this year I carried and shot with mostly Glocks, the second quarter mostly with an even older design, the 1911 pistol (mostly in its original .45 caliber, but for one class in California, a Springfield 9mm version.  I’m currently planning for a training tour that will take me through multiple “ten-round only” states, and while I have ten-round mags for my Berettas and Glocks, it rankles me a little bit to download. So, for this trip I’ll probably take a 1911 again.  I’ve been shooting those since I was twelve years old, my gun-savvy wife thinks I shoot the 1911 .45 better than anything else, and when I strap one on something inside me just goes “Ahh…home again!”

And I haven’t ruled out carrying a revolver for that tour, either.  Those were the guns of police duty and competition when I was young, and I miss shooting them; it just seems that where things are going these days, a six-shooter might not be the best choice for the current pattern of emergencies that have to be responded to with firearms.

But, enough about me.  Readers: what’s your take on “nostalgia guns”?