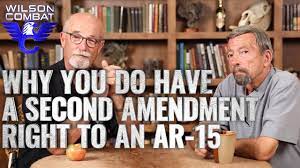 In September, I did a few more videos for the Wilson Combat YouTube channel.  They have some heavy hitters on there: Ken Hackathorn, Larry Vickers, and of course Bill Wilson himself. I feel honored to be in their company.

While in Berryville, Arkansas for the recording this year, the media crew told me the episode that has gotten the most views is one Ken and I did, explaining why semiautomatic rifles such as the AR15, with full capacity magazines, have social value for safety as well as sport.

Or you can listen to it here: https://www.youtube.com/watch?v=F-qzCfmLjqs&t=4s .  It runs about 13 minutes.

A lot of folks say, ”I don’t have to justify owning an AR15! It’s my right!” The problem is, gun owners are a minority (as are the most vehement gun prohibitionists) and the vast majority of people in the middle on this polarized issue need to hear all the arguments. I like to think we covered most of them.

We live in a world where the media still calls these one-shot-at-a-time guns “assault rifles,” when every small arms ordnance authority knows that the true definition of an assault rifle is one with selective fire capability, that is, can be turned into a machine gun with a flick of the lever that also doubles as a safety catch.  You know…like the 600,000 select fire M4s that our current President abandoned to the Taliban in Afghanistan.  Yes, the same President who has publicly stated he doesn’t want you to own one that only fires one shot at a time.

Feel free to pass it on…and, of course, to comment here.  Thanks to Bill Wilson for making it possible.