Let’s return to the things which justify our choice of hollow-point bullets.  A major factor – the one that convinced police chiefs in even the most “politically-correct” cities to insist on this ammo when some were calling for a ban on “dum-dum bullets” – was reduced penetration.  Cops called them “controlled expansion rounds” because as the nose of the hollow-point bullet widened as it passed through flesh, it met more resistance and came to a stop sooner.  Therefore, it was more likely to stay inside the only backstop the Good Guy or Gal pulling the trigger had: the body of the violent criminal attacker.  Self-defense shootings, after all, aren’t likely to take place on gun ranges with the Bad Guy standing in front of a backstop.

Your typical military “ball” ammunition will tend to shoot through and through a human body with more than enough power to kill another human standing behind the intended recipient of the projectile. A full metal jacket (FMJ) round nose 9mm bullet will pierce two feet or more of ballistic gelatin, which is designed to replicate the resistance of human muscle tissue.  A .45 “hardball” round in this configuration will penetrate 26” to 30” depending on the load.  A human thorax is simply not that deep, nor that solid.  Stand three average adult men in line: such a bullet will completely perforate the upper torso of the first, enter the chest and exit the back of the second, and lodge deep in the body of the third.  It can kill three people in a row, two of them theoretically innocent bystanders.

“Just be sure of your target and background” is altogether too simplistic an approach to reducing that danger.  Tunnel vision is known to occur in a majority of gunfight participants.  Darkness may hide the innocent from the sight of the Good Guy who is firing.  The Bad Guy’s body may even physically block the Good Guy’s view.  This is why it’s important to have a bullet which is highly likely to remain in the intended target and not pass through.

You’ll hear the argument, “There’s more danger to bystanders from misses than from over-penetration, and you’re likely to miss some anyway, so don’t worry about it.” That is “apples and oranges,” and terribly short-sighted.  It’s like saying “Don’t be afraid of herpes, AIDS is worse.”  In each example, the smart person wants to avoid both bad outcomes.

Let’s say you come under fire from an armed robber this very night, and have no choice but to shoot back. One of your shots misses and strikes a bystander. It is tragic, but you have a very strong defense: in the Doctrine of Competing Harms, your disciplined defensive gunfire presented less danger to innocents behind the Bad Guy than his wanton, criminal gunfire presented to the innocents behind you. You were forced into difficult circumstances (a moving target in the dark, as you ducked desperately to avoid being shot as you returned fire), and the proximate cause of your less than perfect marksmanship was his action, not yours.  It will very likely be seen as excusable: that is, it shouldn’t have happened, but it would have happened to any cautious, competent person in the same situation you had been forced into.

But let’s say your full metal jacket .45 ball round hit the bad guy in the chest, exited his back, and then struck the unseen bystander.  You had ample time beforehand to select appropriate ammunition, and you knew or should have known this could happen…yet you used the wrong ammo anyway.  Now, opposing counsel has the ingredients to cook up a recipe of “willful, wanton disregard for innocent human life” on your part.

So, reduced likelihood of dangerous over-penetration is one strong reason to use hollow points…but not the ONLY reason.  There are more, and we’ll discuss them as this series continues. 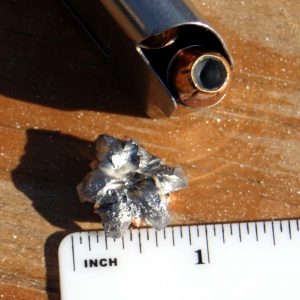