We’re having more typical fall weather.  Finally!  It only rains every other day now, but the temps are falling with the leaves.  And because it’s been cooler in the new greenhouse, the tomatoes slowed down in their ripening.  But now we’ve got the insulation in and most of the log siding, so it’s quickly warmed up out there. 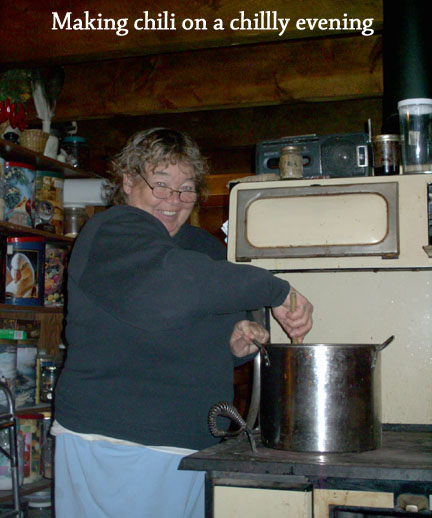 And BANG!  Boy do I ever have ripe tomatoes.  Yesterday, I spent two hours peeling and quartering a five gallon bucket of ripe tomatoes.  My last batch of chili turned out so good I just had to make more.  It’s so handy to just dump out a jar and have a tasty lunch.  I know the chili was good because one jar didn’t seal and I had to refrigerate it.  So we just HAD to eat it up.  Gee whiz.

I simmered the tomatoes in my big roasting pan, plus another smaller one, all night in the oven to cook it down some.  Those tomatoes were really juicy for picked-green ones.

I also set five cups of red kidney beans on to soak for the night.

This morning, I dumped the tomatoes into my second largest stew kettle, diced some green peppers, onions and a couple medium hot chiles into the mix, drained the beans and added them, then some brown sugar to taste, a few more spices and let it simmer until it was just right.  I taste as I go; if it needs this or that, I just add it.  I am NOT a recipe cook.  It drives my mother nuts because everything she used to make was by the book.   I see her cringe every time I make something, dumping in this and that.  Oh well, I’ve always been her wild child.

When it was well cooked together and as tasty as it should be, I ladled it up into quart jars and canned it at 11 pounds (we’re at 1,400 feet above sea level and I need to increase my pressure to match the altitude) for 90 minutes.  I had a nice canner full and they all canned up nicely.

Tomorrow I’ll check the seals again, wash the jars (which usually get a little gooky during processing), remove the rings and store them down in my lovely getting-full pantry.  Wow!  it’s so good to have so many things down there to choose from.

Now, on to the apples!  Isn’t life great this time of the year????  We love the colors, the crisp wind and the FOOD!!

Dear Jackie,
We make most of the soap we use for ourselves and laundry from goat’s milk. I was wondering if you had a recipe for goat milk lotion? Also, do you need to freeze the milk for that as you do for soap? Thanks.

I don’t make lotion; it seems that there’s never enough time.  I do have a recipe for you to try.  Let me know how you like it.  No.  You don’t need to freeze the milk first.

Bring borax and milk to scalding.  Remove from heat.  Melt coconut oil and beeswax together and slowly add to the borax/milk and mix with a whisk.  Add vitamin E oil and cool to room temperature.  Add aloe vera to the cooled lotion and whiskll one final time. — Jackie

Hi Jackie;
I recently paid off 50 acres of property in North East Itasca county MN. I am planning to move there. Im 53 and a pipefitter, so I work in different states frequently. Not being able to get there as often as i would like, its a never ending battle to try and get it cleared. Im using a chain saw and a bush axe. I dont really want Blandin paper coming in and tearing everything up. Was wondering if you thought a bulldozier would be best or if you know a way I could do this myself? Any advice would be appreciated. Thanks,

I hear you Matt; we want to do so much and sometimes it IS a struggle when we have so little time.  I think the thing that’s the most important is to realize that it’s going to be  process, not something that happens right away.  What we did was to first clear off a building site with enough room around it to make it easier to get equipment and supplies in.  We didn’t clear cut it but still made enough of a “hole” for ease of working.

We did this with a truck, chain, chainsaw and axe.  Later on, we used my son and his father in-law’s help with their bulldozers to grade and backfill the basement.

Yes, a bulldozer will be a lot of help, but there are a few disadvantages, too, as there is with anything.  First, they tend to leave heaps of roots/dirt/rock/logs if you aren’t real careful.  We work any clearing carefully, back and forth, knocking out the dirt, crushing the rotten wood into the ground and leaving only dry stumps, brush and rotten logs in smaller piles in the open to burn when it’s safe to do so.  A good operator will do this for you, but a poor one will only shove dirt and all into huge piles that will not burn entirely and you[‘ll be left with “ugly” for a long time.

We pull a lot of smaller trees with the tractor, truck or the dozer we just bought.  Then there isn’t a stump to contend with or roots left to send up suckers later on.

What we have done is to clear small areas completely, then run trails here and there to make hauling logs and firewood easier as we can get in with the pickup then.  And from the trails, we gradually widen them and in the future, they’ll meet up.

I want toleave the big woods a big woods, only making a few small trails to get in and cut dead and down trees.  We are careful to leave a few dead standing trees as wildlife habitat; the small critters and birds need homes too.

My son, David, and I are in the process of clearing the small poppler out of our 10 acre horse pasture so the grass will fill in.  they need the grazing and the grass doesn’t do well in the shade.  As we pull/cut trees, we take out everything that can be used for firewood and cut that up.  When we work in the big woods, we cut first the sizeable saw logs, then make firewood of the rest of the tree.  The logs, we’ll be stacking up to cut for lumber later on; it’s amazing how much of your own lumber you can have in that small stand of woods!

We have a lot of blow-down that’s uprooted and is still very good for lumber, so that’s actually a bonus on our homestead with very few outbuildings (yet!).

It’ taken us 3 years to get a little bit cleared but we’re not working at it all the time; there are other priorities.  But it’s better all the time and I’m always amazed at how far we’ve come.

Keep pecking away at it; it’ll get better when you can spend some concentrated time on your land.  Good luck with your homestead! — Jackie