Hey, I’ll admit the wait was my fault. After the holidays we had a cash flow crunch. But we were excited when I could finally order and receive the first box of books, the third in the Jess Hazzard series, Winter of the Wolves, which readers have been long awaiting. (Just a reminder to those of you who have already ordered on Amazon and read the book, please take time to add a review; it helps our advertising and (hopefully) sales. Thank you very much!) 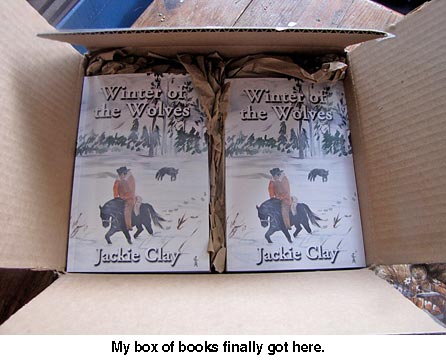 We’ve been refining our planting list and when you plant as much as we do, believe me, this takes lots of time and study. It looks like we’ll be adding about 20 new tomato varieties to the garden. Of course, all will be open pollinated and most heirlooms as well. (If any of you have an old family favorite, especially rare ones, we’d love to have a few seeds!)

This spring we’re going to save seeds from about six varieties of peppers. This means that each variety will have to have its own screened-in cage in the hoop house. Peppers are chiefly self-pollinating but often insects will carry pollen from one type to another. So if you’re going to raise several varieties to save seeds from, they need to be caged so insects can not get to the blossoms.

Likewise, squash and pumpkins are insect-pollinated (chiefly) and must be separated by long distances, up to a mile in some instances where there are no natural barriers such as thick woods, steep hills, etc. Luckily, we have several friends who will be helping us out by raising different varieties which we don’t have enough isolation space/distance to raise. (There are three common species of squash/pumpkins and two or more of the same species will cross.)

I’m going to cut up a couple of Hopi Pale Grey squash to dehydrate. It’s so easy. I just cut 1-inch rings, rind and all, then cut those in half and peel off the rind. Then I cut ¼-inch slices across each piece, giving nice small, thin pieces which dehydrate very quickly. These are so handy to toss into soups and stews! I also grab a handful and throw it in the blender to reduce to a powder. I add it to many of my breads (including cornbread), soups for thickening, and even quick breads such as banana bread. What a versatile food! And tasty too. — Jackie