Any of you who think we have a “perfect” bunch of huge gardens, let me correct your guess. Oh, sure, our main garden, which has been around for many years, is weed free and pretty. But the others? Hardly! The berry patch garden is okay in the vegetable patch (corn & beans), but the rest … and the Central garden, which used to be our pig pastures? Oh yeah, weeds there too! But despite that, the corn, potatoes, and beans there are doing pretty good despite it.

Will got the North garden all tilled, first using the tractor-mounted tiller, then the TroyBilt Horse and finally the Mantis for smaller spots. But we still have a lot of hoeing and hand weeding to do along with hilling up the potatoes. It does look pretty nice, though, despite weeds between the corn plants. (The corn is getting fairly tall and looks healthy.)

One thing we’ve learned is that new gardens very seldom produce well and are never weed free — or even weed-tolerable. This is one reason I always laugh when self-described “preppers” don’t have gardens, saying if TSHF they’ll simply till up their backyard and plant their survival seeds they hold in storage. Lotsa luck with that, guys! Sometimes it takes years to get a garden up and running. And that’s if you have gardening experience. For instance, our main garden is between thirteen and fourteen years old. Of course it’s great. But the berry patch? It’s only about eight years old, and when Will and I fell off the barn roof together a few years ago, the weeds had a heyday. The garden still hasn’t recovered. The Central and North gardens are only three years old and we feel they look pretty well, considering.

We bartered for a big side-delivery manure spreader and today Will finished doing some repair work on it. He took it out to the cow pasture and loaded it up. It worked nicely! Now he’s got lots of huge piles of rotted manure to spread on our small hayfields. He’s going to save the horse manure until fall when the gardens are done, spreading it there. (You can hardly have too much poop!) 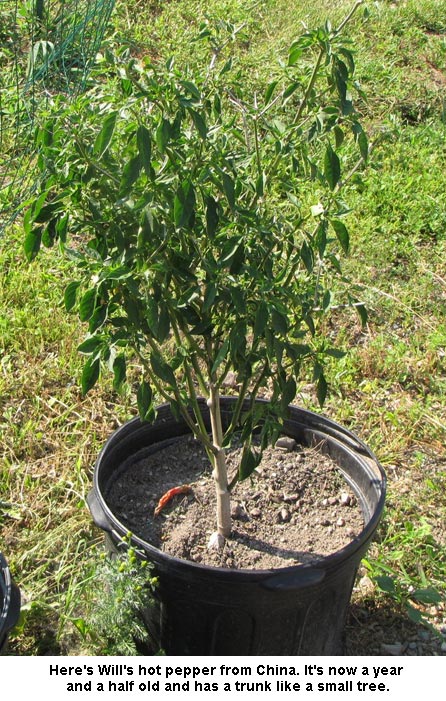 Will’s hot Chinese pepper, he grew from seed he found in the Seed Saver’s Yearbook, over-wintered okay, despite an infestation of aphids. It’s in a five-gallon container and Will just moved it out to our pepper hoop house. It’s blooming its head off and we’re excited. This pepper has slender, long and very hot peppers. My adopted son, Javid, from India, loves hot peppers and when Will gave him a piece to try last fall, even he said it was HOT, but good! 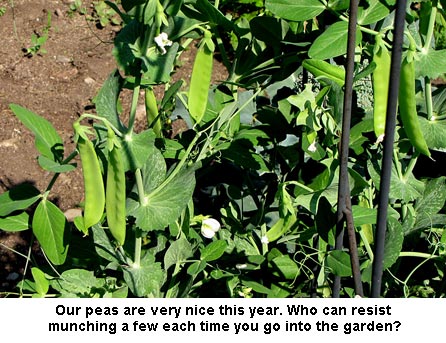 Our peas are setting pods and we’re eating Mammoth Melting Sugar Peas every other night in salads and stir fries. We grew some Alderman, aka Tall Telephone peas this year. They’re six feet tall and setting plenty of nice, long pods. It’s been years since I grew this variety and will be adding it to our garden again next year, giving us both a bush-type (Green Arrow) and climbing pea. Yum! — Jackie