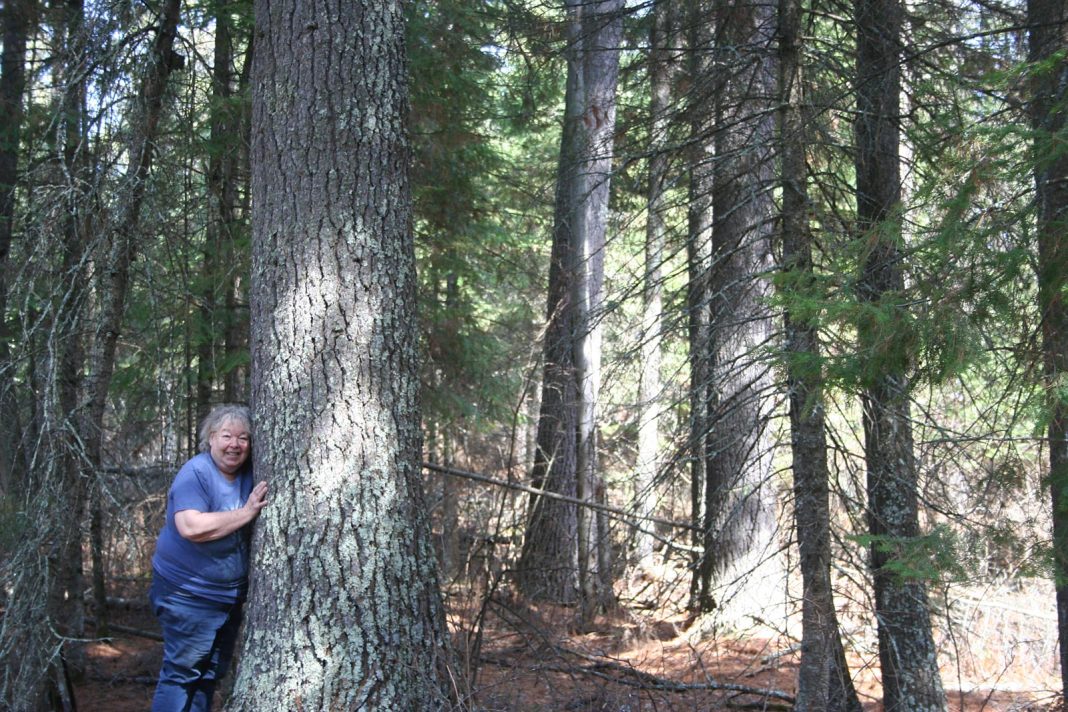 On Tuesday morning, we became the proud owners of the Big Pine Forty. Or in other words, we signed to become deeper in debt. But like all other past debts, we will suck it up and try to get this paid down as quickly as possible. On the way home, we stopped in our driveway to tack up a Private Drive sign so any hunters retrieving their deer stands would know the land is no longer Potlatch land, available for hunting. Will has found five deer stands in various shapes of repair or dis-repair on the land so far. And even though we are hunters ourselves, we don’t want others hunting there for our own safety during deer season. (I’ve been shot at “by mistake,” wearing hunter orange!)

Will is out today cutting a four wheeler trail through the dead blow-down trees out there. Yesterday he and David went out and went as far by ATV as they could and walked the rest to try and remove a very old deer stand which was chained to a tree. The chain had been there so long it was growing into the tree and would probably kill that big pine. David climbed up and was able to unbolt a couple of through-bolts and pulled the chain about 3/4 of the way out. They have to go back and try to unscrew two lag bolts to remove the chain, which has partly grown into the bark.

Good news on the old heirloom corn. So far, two varieties are germinating; Assiniboine and Dakota White. I bought a heat mat to use as our house has often been 60 degrees or just a bit above and that’s a little cool for corn to germinate, even with fresh seed. I want to give that corn every chance possible! I’m even dreaming about planting that corn.

I’ve been carrying out dozens of flats of tomatoes and peppers so they can harden off on our deck. That takes about two hours daily as I also have to water them after they spend several hours in the sun. I’ll be glad when they can be big guys and go out into the hoop houses and garden in their Wall O’ Waters.

Will pruned most of our apple and pear orchard today. That was a job. But it was made easier with the battery operated reciprocal saw I bought him for Christmas. We had several trees damaged severely by the extremely cold winter several years ago. We’d let the trees alone to recover as they could but it was definitely time to remove the dead wood and prune the trunks down to one single trunk. Now they look brutalized, but will recover and grow better for the pruning they really needed. We also planted our Ely pear and Prairie Magic apple from St. Lawrence Nursery, which replaced two trees that had died. (If you’d like to learn more about growing apples, check out my article, Apples on your homestead in Issue 143 of Backwoods Home Magazine or the Twenty-Fourth Year Anthology.) — Jackie