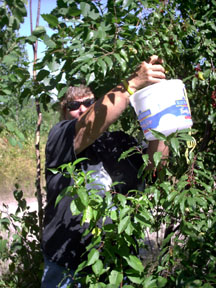 Well, I beat the birds to my pin cherry trees. Almost. Kind of. I was out there picking with David in the morning because I’d seen cedar waxwings down the trail. They can clean out a tree in an hour! Then my cell phone in my pocket rang. Dave Duffy at BHM. He told me he hadn’t received my earlier blog Friday morning. So back to the house, fire up the generator, retrieve and resend the blog. We did this several times before I finally hit on the idea to send it to the BHM office and let them forward it to Dave at his house. It went through. Do aliens have the first blogs somewhere? Anyway, I picked a big batch of pin cherries, then a big batch of chokecherries. What to do with them? I have lots of jam and jelly so I decided to make my own version of David’s favorite condiment, Arby’s Bronco Berry dipping sauce. It, for you uninitiated, tastes kind of cherry with bits of red chunks and a definite hint of sweet jalapeno. I read the ingredients, then used my own taste buds to develop my own recipe.

I boiled up the cherries and mashed them well. To the pin cherry batch, I added four jalapenos, seeded and halved to a half ice cream pail full of cherries. After boiling for about 10 minutes, I dipped out the peppers and tasted the juice. VERY jalapeno! So I boiled and mashed the chokecherries, strained the juice and added that to the pin cherries. Too bland. So I put all the cherries in a jelly bag and strained off the juice.

When that was done, I added another split, seeded jalapeno and boiled the juice for five minutes more. Ah! Better! So I dipped out that pepper and measured the Four cups. I poured it into my big jelly kettle and I added half a sweet red pepper and half a cup of pitted sweet cherries, ground through a meat grinder and boiled that until the pieces were tender. Again I tasted it. Perfect, but of course it needed sugar. I measured out four cups of sugar into a bowl and set it aside. Then I added a package of powdered pectin to the boiling juice mix. This I brought back to a boil and dumped in the sugar. Again I brought it back to a rolling boil and boiled it hard for a minute. 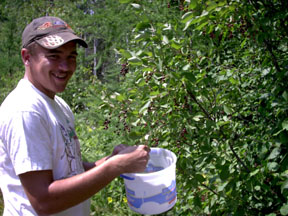 Then the mixture was ready to ladle into half pint jars and process in the water bath canner for 10 minutes. Of course I kept out a dab in a bowl to make sure it would thicken….not as much as jelly, but more than syrup. AND TO TASTE, of course!. Yep. Perfect!

I now have a batch of Famous Jackie’s Mustang Cherry sauce to dip chicken fingers or shrimp in. It will also make a killer gaze for poultry or pork! I can’t wait!

I went dragging back up to the tree to save the rest of the cherries from the masked robbers. But as I picked they flew in above me. Cedar waxwings! They didn’t seem to mind me picking below them and I got a real good view of their little masked faces stuffing down the fattest, best cherries from the top of the tree. Oh well, there are lots of chokecherries and they don’t like them as much as they do pin cherries. But the bears do!

Will you still be in the print issue?

Are they still going to carry you in Backwoods Home Magazine (print issue) like in the past so we have your questions/answer to refer to? My wife and I hope Dave still will put these in. I have almost all issues from the second year on. I also have most of the articles you did for ASG. Hope you and your family stay in good health, and look forward to you wisdom and information in the future.

Thank for the kind words! Yes, Dave Duffy is still going to carry the regular column in the print issues of BHM, just like in the past. After all, there’s still a lot of us backwoods home homesteaders who don’t have a computer or internet access. (I didn’t have internet until Dave decided I should blog!) — Jackie

White in the bottom of my pickle jars

I made pickles with a dilly bean recipe and they got all white at the bottom. What did I do to get this. I sterilized jars, used new lids, did the hot water bath… Last year I did the same thing without a problem and this year I have nothing but white .. Help??

There are two common causes for white sediment forming on the bottom of pickle jars. The most common is minerals in the water. In some locales, you have to use filtered or bottled water. (Sometimes using someone’s water from a pure spring will also work.) If it isn’t the minerals, it might be the common bacteria that form in gently fermented dill pickle recipes. Neither of these are harmful. Make sure the dilly beans are not soft and do not smell or taste “funny.” If they seem okay, they should be fine to eat. To get rid of the problem, use filtered water or bottled water for your pickles and use a different recipe that doesn’t allow any fermenting to occur. — Jackie

Moving blackberries into the sun

On my acre and a half there are a number of wild blackberry bushes growing on the back edge of the property. They are shaded by trees and growing in thickets of weeds. In the five years I’ve lived here, I’ve only seen sparse berries on them – the berries that have been produced are very small and not really worth picking and eating.

I’d love to grow some blackberries, and would like to know if I can dig up some of these blackberry bushes and move them. If I do, will they ever produce decent berries? I’ve read they should be getting full sun (they’re not) and wonder if that’s part of the reason they’re not producing much. If I dig some of them up and move them, when would be the best time of year to do so?

I would agree that your wild blackberries are suffering from lack of sun and possible crowding from being in the same spot for years with suckers choking out the older plants. Yes you can transplant them; any time of the year will work except very late fall and of course, winter. Remember though that wild blackberries can become invasive so don’t plant them in your main garden. Reserve a spot for them along a sunny fence line or next to an outbuilding where they can be contained with tilling and natural barriers. With minimal care, once established, they should quickly become brambles bearing lots of big berries. Lucky you! — Jackie

How do you can potato soup?

To tell the truth, I’ve never canned potato soup. I’ve just canned the potatoes, either whole new or diced. I can whip up a batch of potato soup from those in less than 10 minutes, so I don’t bother, especially when recipes canned with milk often develop a curdled appearance. I just heat 2 Tbs butter with 2 Tbsp flour in a pot. I pour in enough milk to make a nice soup base. Then in go the drained potatoes, which I mash up a little with my masher. I also add either chicken broth or powdered chicken soup base, half a pint of my canned whole corn (if I feel like it) and 1 tsp onion flakes, plus spices. Sometimes I’ll throw in half a pint of diced chicken, in broth instead of the above chicken soup base or broth. Turns out pretty good every time. It’s fresh, using my own canned foods and is so quick and easy. — Jackie

I’m raising baby corn for the first time this year and cannot seem to to find out how to can it without pickling it. I have bought it out of the store just canned in water. Do you have any idea how to do this?

I have a large area of Chokecherry bushes next to my house..and I had a lady make me some chokecherry jelly last year…it was the best jelly I have every tasted…she moved away during the
winter…and I don’t know where she moved to..but I would like to locate a good recipe for making the jelly…I have a water bath canner..and I can get lots of pint kerr Jars…just need the recipe.

Sure Don. I’m picking chokecherries by the bucket right now. And making jelly from them. Using fresh chokecherries, rinse them and drain. I add 1/2 apple juice; you can use water but the apple juice seems to help ensure jelling. Put in a pot and boil until soft, mashing with a potato masher. Cool until you can put your hand in the mass. Mush them up by hand. This step gives you much more juice per batch. Strain through a damp piece of cloth laid in a strainer, over a bowl or hanging as a jelly bag. Let drip for several hours. Don’t squeeze the bag or the jelly will look cloudy instead of clear.

I do the quick method, using powdered pectin. Measure 4 cups of juice into a large kettle, add a box of powdered pectin and bring to a boil, stirring well. Measure 4 cups of sugar into a bowl and have ready. When the juice boils rapidly, add the sugar and bring to a rolling boil while stirring nearly constantly to avoid scorching. Boil hard for one minute, then quickly ladle out into hot sterilized jars. Process in a boiling water bath for 10 minutes. That should do her. Be advised that sometimes (phase of the moon??) chokecherry jelly refuses to jell. In that case you have the best chokecherry syrup you can imagine! — Jackie