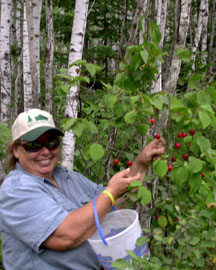 The wild plums are ripe!
(but plum pickin’ ain’t what it used to be!)

I’ve had my eye on the scattered wild plums on our mile long driveway. The trail is so bumpy that you can’t (or wouldn’t want to) drive very fast, so I do a lot of “sightseeing” while I drive to and fro with the ATV, doing mailbox runs or with the truck, hauling supplies.

Our wild plums are smallish, bright red and pretty sweet for wild plums. I look forward to making a batch of plum jam out of them. IF I can beat the bears to them. They also really, really like the wild plums! But right now, the bears are busy with the grove of chokecherries I was going to get today. I went in there and saw evidence of fresh bear activity (broken branches, tracks and a WHOLE lot less cherries than there were yesterday), so decided not to go mano a mano with a bear over chokecherries when I knew where there were more, anyway.

So this morning, I decided that I’d better get with my harvesting or miss out. I grabbed my cell phone (so I could be in contact with Mom, who also has one at home, in case she needed me while I was outside), my picking bucket and jumped on my trusty ATV. The plums are about a half a mile down the drive and I don’t like to leave Mom long, even if Tom IS there working on the new porch’s roof. 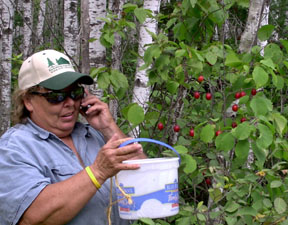 I parked off the trail and started picking. Oh! They were so ripe they started falling off on the ground if I just moved a branch! Of course I had to pop one in my mouth to see if it was really ripe, you know.

Here I am, way out in the pristine woods, enjoying nature at its best when my %&*)$&)(*_#$(*# cell phone rings!!! And it’s not Mom! It was so unbelievable all I could do was laugh. It was just so strange! Ain’t technology great? Or is it an interruption on a peaceful life? I tend to think the latter.

I’ve posted readers questions with my answers below:

My grandmother used to make salted onion tops, we lovingly called the “Zeb” She was very french and I believe that may have been where this recipe originated. Anyway, she has since passed and I
did not get her secret for these lovely salted green onion tops that we put in soups. I have tried, but they came out a slimy mess. Can you help me out? I am sure it isn’t rocket science, but…I seem to
miss something. Love your articles and have learned so much from your positive spirit. Keep up the GREAT work.

Boy Christine, you’ve got me here. I’ve never even heard of salted onion greens. Does anyone else in our BHM family know about them? We’d sure like to hear from you if you do! — Jackie

Thank you for taking the time to answer all your many e-mails that no doubt pile up quite quickly. We live in a busy world and unfortunately we are losing a valuable resource, and that is the knowledge that comes with age and necessity. Your articles and this magazine are rekindling many of the ways of the times past. Just started reading back issues and wow, what a treasure. Now let me give you an example of why you may be my only hope to find the answer to my question.. My grandmother who is now 87, made the best green beans in the world and it was only recently that I found out
why they were so good. The reason, they were dehydrated green beans called leather britches (southern term). What I could glean from her memory ( she has alzheimer’s) is that she would string the green beans with a needle and thread and dry them. How can I do this? Do you have any idea? I know the stringing part will be quite easy but can I dry them on a clothes line, or how about in the
basement next to the dehumidifier? I have read up on drying food, but I have too many beans for a food dehydrator, and I would like to try the old way because after drying she just hung them in the
pantry all winter long till they could be used. We live in a very humid part of the country and mold is a concern but overcast days are abundant. Help!!!!

Most folks just string the leather britches green beans on a stout thread, run through the stem, with the beans not quite touching and drape strings of these in the pantry, kitchen, or attic until they are dry. I wouldn’t recommend either the clothesline (too much sun) or the basement. You want good air circulation and a place that isn’t sunny. If your clothesline is in the shade, it would be fine. But bring the strings in if it is threatening to have a dew or rain; you don’t want any moisture on them or you’re right, they’ll mold. Choose beans that are ripe but that the seed isn’t too large or the beans will be tough. And we want our leather britches to be nice and tender when we cook them, don’t we??? Good eating. — Jackie

Getting rid of powdery mildew

This is such a nice way to communicate. I eagerly anticipate reading your new blog each week for you pack a lot of feeling and thought into what you write. Question concerning Hopi grey and Mayo
blusher squash. How do I know when to harvest them and my squash seem to be getting a fungus on the leaves. Resembles a mildew and the leaves turn yellow and die. If I have to pick my squash early will they get hard, or should I can them? What do I do?

Sounds like you have powdery mildew on your squash vines. This is caused by a fungus and can be treated, if caught early, by spraying with Shield-All II, which is a natural product, available through Gardens Alive! at www.GardensAlive.com. If you didn’t catch it quick enough, it probably won’t kill the plant before the squash are mature and you can just leave them, as usual. Next year grow your squash, melons, and cukes elsewhere as the fungus may persist in the soil. Be watchful of it in the future and spray early and it will soon be a thing of the past. Also, be sure to remove all vine residue from the garden and DO NOT put it on your compost pile as you may spread the disease. — Jackie

I LOVE chokecherry “anything”. I remember making jam with my mother every year. I can’t find her recipe, but I thought it contained apple juice AND almond extract. I have looked up quite a few
recipes, but have found one that had almond extract in it. What are your thoughts and/or experiences? I have also have read about several different methods on extracting the juice; steaming vs boiling; freezing the berries first. Are cherry pittors any good since the “cherries” are so small?

Do you have a good wine recipe for chokecherries that would be more like an after dinner port type wine?

I usually use apple juice to start my cherries boiling and increase the amount of juice. You can’t taste the apple in the juice, just the chokecherry. Chokecherries are sometimes not too juicy and need a “boost” to get them cookin’. The apple juice is high in pectin too, which helps the jelly jell. If you’re going to have a jelling failure, it’s going to be chokecherry jelly; sometimes it has a mind of its own! But then you have dynamite chokecherry syrup!

I often add a little almond extract to make it more “cherry” tasting, which it does. But I’ve never seen a recipe calling for this. I just like it. But if I don’t have almond extract, oh well. Plain is fine, too.

No cherry pitters don’t work for chokecherries. I do want to experiment with my Tomato strainer and see if that will give me the pulp without the skins and seeds.

No I don’t make wine; I don’t drink. Sorry. I’m sure there’s some good recipes out there. Seems like I read one in BHM not too long ago….. Check it out. — Jackie

I think part (main ingredient) of the formula for natural bug repellent Robert asked about in issue #107 is sulfur or flowers of sulfur, available at drug stores. When I was a kid my mom used to rub it on my skin especially around my waist, trouser leg openings, sleeves and neck. It kept off ticks and chiggers. I still use it. A word of caution, some people may be allergic.

You know, I’ve heard of that. But Robert said they took the bug repellent orally, and you wouldn’t want to do that with sulfur. Thanks for the tip, Tim. I’m sure a lot of people will be giving it a try. — Jackie

Can you tell me how to pressure can hot cherry peppers?

Sure thing. They’re dead easy, too! All you have to do is to either remove the seeds and membranes, slicing the pepper in half (also removes much of the heat!) or simply make a few small slits in the side of the pepper to let the boiling water circulate inside the pepper. Then add the peppers to a pot of boiling water and boil for 3 minutes to soften slightly. Then pack hot in a hot jar. Squeeze them in. Add 1 tsp salt to each pint. Pour the boiling liquid into each jar, to within 1/2 inch of the top. You’ll process the pints for 35 minutes at 10 pounds pressure. (If you live at an altitude over 1,000 feet, consult your canning manual for instructions on increasing your pressure to suit your altitude.)

Roasting them before canning is another method. Here you’ll either bake in your oven at 450 degrees until the skins char or roast them on your grill until the skins blacken. Then put them in a paper sack and roll the top closed. Set for 20 minutes, then plunge into ice water and rub the skins off. Pack in jars, as above, add salt and boiling water and process. This makes them taste grilled and I think they’re real good this way….sort of like chiles!– Jackie