We’ve had a very warm week; over 50° some days, with sunshine! The first day, Ashley and I set out lawn chairs in the driveway and sat down to absorb some fabulous vitamin D. We were in our T shirts! It felt SO very good. Now you folks living in more hospitable climates may figure doing this at 50° is NUTS, but when we’ve been used to below zero temps, 50 seems so very warm. 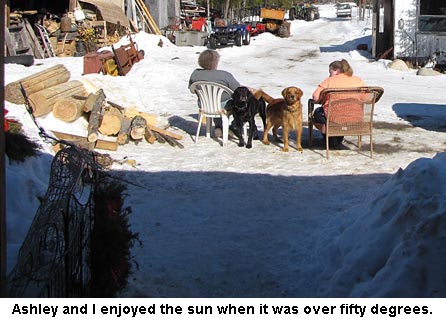 And it wasn’t just us, either. I had to go to town to mail some seed orders to people and when I got back, my friend, Dara, was sitting in a chair, knitting! I had to laugh. 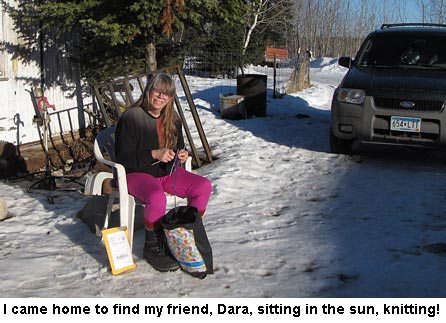 Then on Saturday, David and Ashley helped haul out trees which Will had been cutting. They were stressed by bud-worms then carpenter ants got into the bottoms of them, which killed the trees. So before they fell and rotted, Will cut them down, limbed them and the “crew” started hauling them out of the woods. David used the four-wheeler for a while, then his snowmobile, giving the four-wheeler to Ashley. We all had a fun day and ended up with over a cord of fir which will be cut, split and stored for next year’s firewood. Will figures there’s over two more cords right in that small area. (We start cutting firewood EARLY in the spring so it’s all split and stacked under cover to dry well before use the next year.) 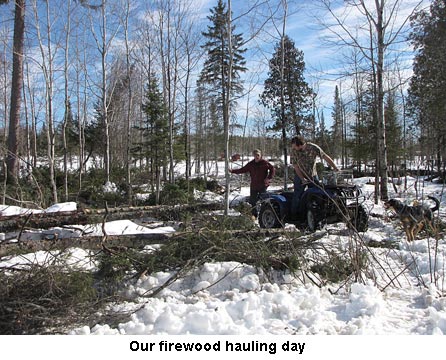 Today it’s raining like crazy and we even saw lightning. Pretty crazy winter weather, for sure. I guess the beavers were right, after all. They said we’d have an average winter; no crazy cold or snow. And, so far, that’s just what happened, no matter what the weather forecasters and the Farmer’s Almanac predicted.

We’ve been having quite a response to our fall homesteading seminar and so far, three people have sent in their deposits. I’m thinking we’ll fill up for sure. That’s nice, I’m sure we’ll have lots of fun, as always! — Jackie