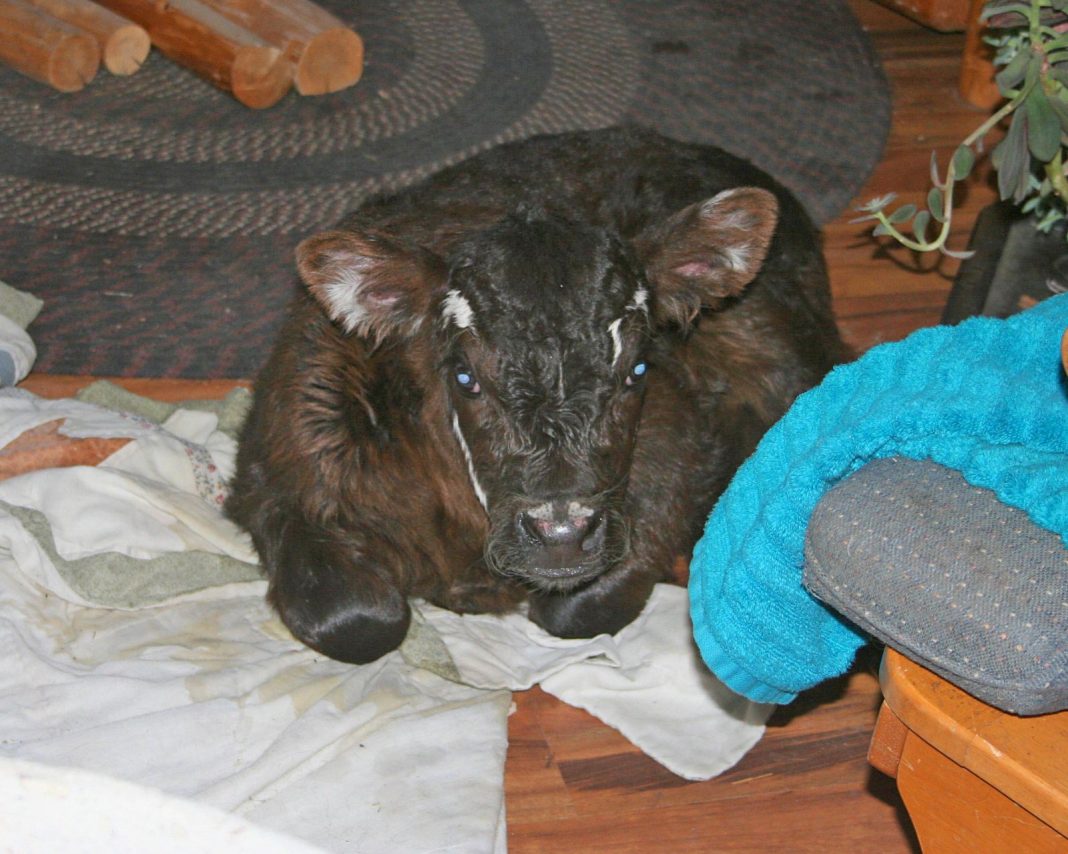 First off, we had near-blizzard conditions with driving snow and 45 mph wind. And, of course, we had to set out big round bales for the cows! I man the gates (or would that be wo-man the gates?) while Will drives the Oliver with the hay spear on the front. He took off to get a bale while I stood by the gate, waiting for him to come. I waited. And I waited. Getting frozen here, Will … And I waited. Boy am I ever getting frozen! Finally, Hondo bounded down the hill; a sign the tractor was coming. No dice, Hondo was just bored. Finally the horses whickered that they heard the tractor coming. (I’m about dead here…) And there was the beautiful tractor appearing out of a cloud of snow, through the deep snowdrift on the trail I had barely gotten through with the four wheeler.

I swung the gate wide open and he delivered the bale to the waiting cows. (Hey, maybe I won’t freeze after all.) Will had gotten stuck up on the driveway but now the trail was clear. So he took off to get another bale for the training ring cows. It wasn’t too long before he was back, circling the barn to line up for the 10-foot gate of the training ring. But he never appeared! So I walked up the hill just in time to see him drop the bale and back up. There was a bad drift there, too! He couldn’t drive through it.

So he came around the front and speared the bale from the west. But he couldn’t get turned around in the deep snow just in front of the gate. So I opened the pasture gate so he could go out there, where the snow was trampled flat, to turn around. Well that would have worked fine but the cows thought he was bringing them another bale and rushed to see as he turned around. Then when he started to drive off, they spotted the open gate and three of them charged through the gate at a dead run, right past me on the other side and on up to the storage barn. I knew the door had been left open and there were several sacks of grain inside and figured that’s where those smart cows were headed.

So I got Will through the gate and tore up the hill, through the deep drifts, to the barn. Yep, three cow butts were in the barn door! I got Hondo after them and two of them backed out. But Mamba, the stubborn milk cow, would have nothing to do with leaving that grain. So I had to squeeze past a 1,200 pound cow and slap her ears to get her to back up. She did and shut the door behind her! Darned! She dove back into the grain and the door swung back open. Thank God! I finally got her out of the barn, shut the door and chased them all back down to the pasture where Will was waiting to open the gate.

Whew! Now we were really frozen. It was -29 with a blowing wind. The hay was delivered and we headed to the wood stove in the living room real fast! But we had 2 heifers due to calve so it was pray and pray some more that no calves were born that night.

The prayers were answered. The weather moderated and we maintained our every-two-hour vigil. Will went down to water the stock late yesterday afternoon and was missing our Hereford heifer. He looked in the barn and there she was, with a brand new bull calf! He called me on his cell phone and I grabbed some towels and tore down to the barn with the four wheeler. The calf was not only born but up and walking around! We worked on him for three hours, drying him off as best we could, but the temperature was swiftly falling. Finally, at -19, we loaded him in the back of the Escape (sorry Bill) and brought him up to the living room as his ears were starting to freeze. My son, Bill, keeps his vehicles spotless and is cringing now as he reads this. But hey, Bill, we did cover the back with a big blanket — no “mistakes!”

So Ninja spent the night in the living room while Will slept on the sofa in between 2 hour shifts checking the other heifer. Now Ninja (because he sneaked up on us; we thought the other heifer was closer than his mom was) is back outside with Mommy and doing great. And we’re both pooped. We’ll be so glad when that last calf comes so we can sleep all night again! Ah, homesteading! But we also won’t let the bull stay with the cows when making winter calves would be a possibility — lesson learned.

Meanwhile, I finally did get my pepper seeds planted. They’re all snug in their trays, covered in plastic, right behind our wood stove where it’s nice and toasty. Choosing and planting those seeds sure makes winter seem shorter. (If you’d like more information about starting your own seeds, check out my article in Issue 67 of BHM or the Twelfth Year Anthology.) — Jackie