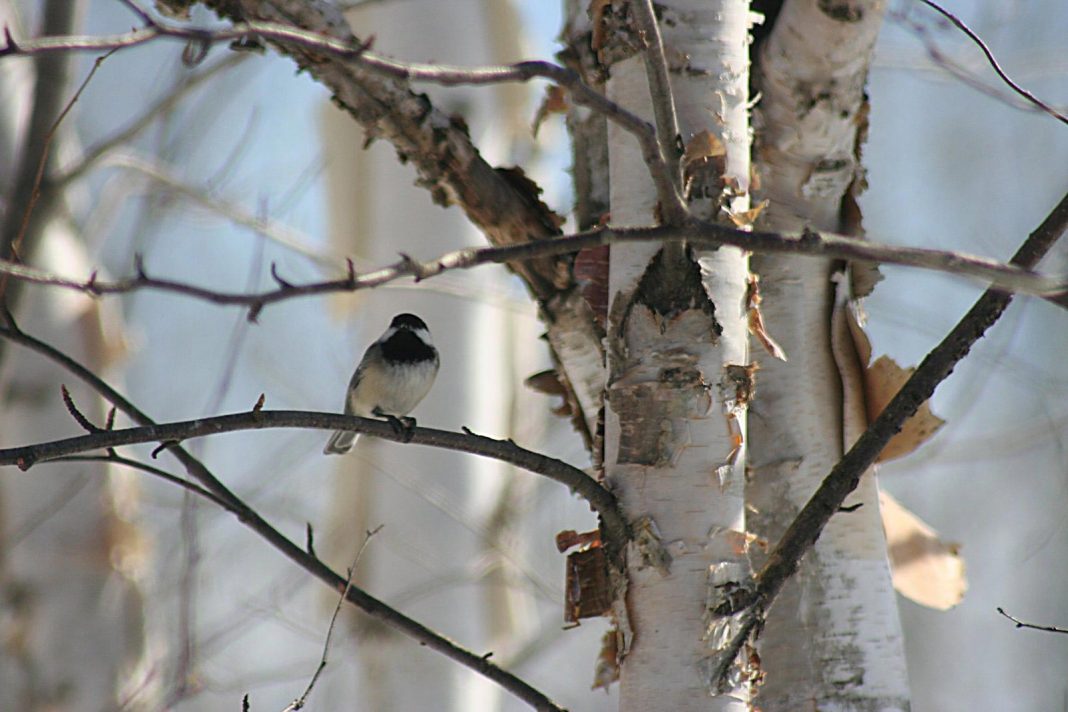 Although I live in the middle of the woods and feed hundreds of birds, my sister, Sue, and I decided to make a trip to the Sax-Zim Bog, about 40 miles from us to check out the famous birding location for a girls day out. We met at the Wilbert Cafe (a historical cafe on Hwy 53) and carpooled to the Sax-Zim Visitors Center (which we found closed on March 11th). Oh well … There were several feeders around the gravel parking lot but a whole lot less birds than we’d expected. After all, it is kind of late in the season to view hoards of hungry birds. Sue tossed extra handfuls of shelled peanuts around a few feeders and we sat in the car and waited … And waited.

We saw several Black-capped Chickadees (which we both had more of at home), a few Nuthatches, and finally a scattering of Redpolls. Oh well, I don’t have Redpolls yet, although Sue has seen hundreds on their way north. We’d hoped to see some Canadian Jays or woodpeckers, but no dice. Oh well, we went back to the Wilbert Cafe and had a nice home style lunch, then drove to our respective homes, enjoying the sunshine. Spring is on the way.

That evening, Will was down watering the cows when he called on his cell phone. Our yearling bull was bloating! I rushed down and sure enough, he was down with a very big belly. Now as bloat kills a lot of cattle, I first called our vet, who had just gotten home in Ely — 60 miles away, then rushed to the house for oil. I didn’t have mineral oil, the first choice. But I did have a gallon of peanut oil. Nor did I have a regular stomach tube. But I did have a calf feeding tube. So we used those. With a nose lead in the bull’s nose, Will held his head upright and I slid the feeding tube down the bull’s throat and we began the slow process of draining the oil down through the relatively thin tube. It took awhile but we got it all down him. Then I smacked his butt a couple of times with a rope and he got to his feet. Good so far … Then he pooped. Better … We then walked him toward the gate, heading him for the training ring, barn, and chute. He pooped again and his belly was going down. He also had quit kicking at his belly. Whew!

Long story short, the vet finally arrived and gave him a couple of shots and checked him over. Yep, he was okay. (We checked him twice more that evening, just to make sure.) In the morning he was fine and came right over to eat his feed. What a close one that was! If Will had watered earlier, we may have never found him in time; he’d have been dead in the morning. Thank you God! — Jackie