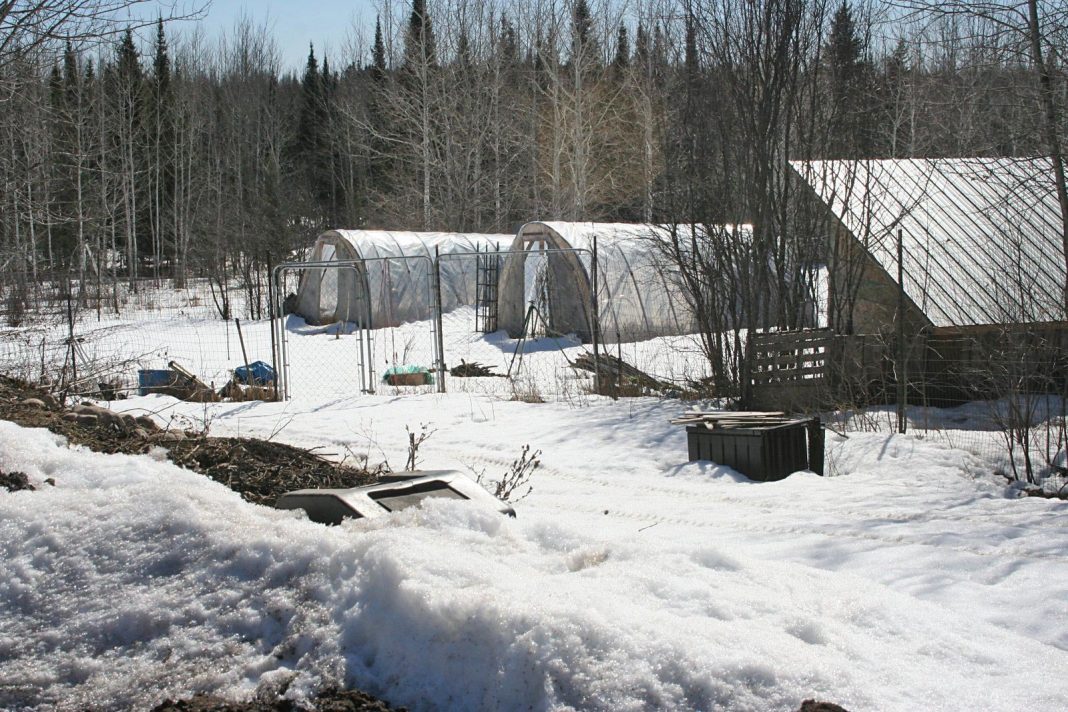 After such a long winter, spring has finally arrived. Our temperatures have been between 35-45° F during the day, but going down to freezing or below at night. This is lucky, as it lets our snow melt slowly, soaking in instead of running off. So good for the gardens, trees, and wildlife. Not to mention our mile and a half driveway! With six to eight inches of frozen snow pack, it gets real bad when it doesn’t freeze at night. Rough and tricky to drive as you break through thick ice over puddles, bottom out on some, and skid down the hills. (Four wheel drive is great but it sure doesn’t help slow you down on those slick downhill sections!)

I’ve been watching the snow-covered garden, just waiting for the day I can actually walk on the dirt. Fortunately, our hoop houses made it through the winter with no damage from the very heavy snow on them — we were worried. I’ve been transplanting the first of our peppers. Despite me frying them by leaving plastic on in a sunny window (it was cloudy!), most have recovered nicely. The ones that died were re-planted and are just now coming up. I can’t get over how fast our tomatoes are growing. I’ll be transplanting the first flat of them this week.

We’re going to plant some tomatoes and peppers in the Sand Garden and North Garden this year, sort of as an experiment and “overflow” from the main garden, where they are usually planted. We’ll put hot peppers in one hoop house, sweet peppers in the other, and the “overflow” in assorted plots here and there. I can’t wait!

We saw Trumpeter swans flying overhead the day before yesterday and also a few Canadian geese on the neighbor’s creek. Ashley texted me and said she also saw a robin! (I think they were visiting Bill and his family, 100 miles south, by Sturgeon Lake.) Yep, spring’s on the way. — Jackie