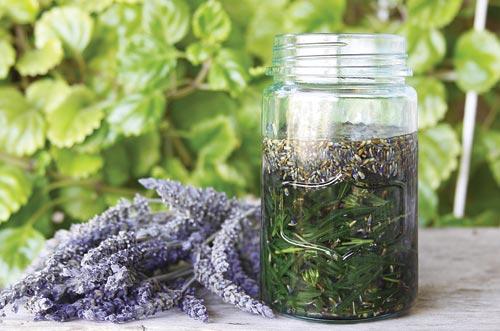 Every cook or baker has a secret or two they keep tucked in their apron pocket. My secret? Homemade flavoring extracts. They are simple to make and the possibilities are endless. All you need is a few sterilized jars, alcohol, and select food or spices.

The alcohol used to make extracts is usually 90-proof vodka because of its neutral taste. It infuses well with other flavors. I prefer the potato-type vodka because it is fairly easy to find and I think that it gives a smoother edge to the finished baking extract’s flavor than the grain-based ones. Some folks like to use rum or bourbon for their vanilla extracts.

The spices and foods you choose to make into extracts may include orange, ginger root, lemon, or mint, among others. Just be sure to prepare it according to the directions in the recipes.

The technique is exquisitely simple:

2. Prepare the food item or spice by crushing, chopping, grating, peeling, or roasting, as needed.

3. Place the food in the jar and pour the alcohol over it.

5. Place in a dark cupboard.

6. Shake the jar three to four times a week.

7. When the flavor is as strong as you like, you are ready to decant it. Pouring it through a coffee filter- lined sieve will eliminate all the little bits of foodstuff and leave you with a nice clean liquid.

8. Bottle and label it for use or gift giving.

Cayenne: ¼ cup powdered cayenne pepper to 1 cup vodka; steep four to six weeks. Beware — this is hotter than Hades in August! I use it by the drop, not by the teaspoon.

Cherry: fresh cherries, pitted to fill an 8 oz. jar; cover with vodka and steep for six to eight weeks.

Cinnamon: 4 sticks of cinnamon to 1 cup vodka; steep for six to eight weeks.

Citrus: rind with pith removed of five oranges, lemons, limes, or three grapefruits to one cup vodka; steep for six to eight weeks.

Hazelnut: ¾ cup toasted nuts to 1 cup vodka; half a vanilla bean is a nice addition; steep for six to eight weeks.

Mock-maple: ¼ cup lightly warmed ground fenugreek seeds (not toasted or they will get bitter) and half a vanilla bean to 1 cup vodka; steep for four to six weeks.

Vanilla: 6 vanilla beans (slit lengthwise) to 1 cup vodka; steep for six to eight weeks or longer. Look for Grade B beans. They are not as pretty, but they contain less water and will offer more flavor. Flavor extraction for vanilla beans happens best when they are immersed in 40% alcohol. If the alcohol you bought has a higher percentage, just add water to the correct dilution.

Now, I want to share with you my super-secret ingredient — garam masala baking extract.

Combine and grind together:

Place crushed spices into a glass jar and pour vodka over to cover.

Seal and label. Decant in four to six weeks.

This garam masala extract gives banana-nut bread a wonderful warm undertone to its naturally sweet flavor, and it adds a nice “pop” to pumpkin waffles. I’m thinking about trying it in hot chocolate next.