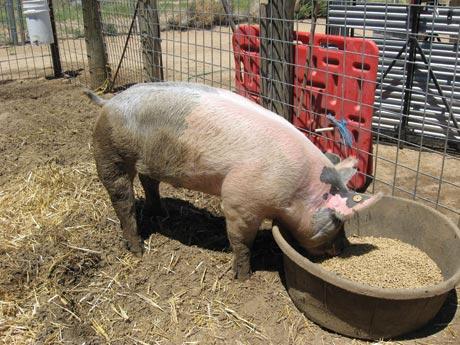 Lean ham, roasts, chops, savory sausage, and thick slices of bacon are the reason pigs are raised at home. A typical meat pig weighs 200 to 270 pounds and reaches that weight at five to six months of age. Because raising pigs requires time and feed resources, it is important to begin the enterprise with good quality, fast-growing pigs.

A desirable pig has a long body and deep sides. The side should be long and so should the length of the pig from head to tail. The pig should be meaty with bulging muscles in the shoulders and the ham (rear). Don’t select a pig with heavy muscling in the shoulder and light muscling in the ham because the more valuable cuts of meat come from the rear of the pig. The loin (down the back) should be thick and wide. When viewed from the rear, the thickest part of the ham should be about two-thirds the distance from the top of the pig. Avoid pigs that are wide through the top of the ham but narrow through the lower part. Two additional indicators of muscling are the width of the chest, when viewed from the front, and the width between the hind legs, when viewed from the rear. A heavily muscled pig stands wide, both front and rear.

Young pigs are usually weaned from the sows at six to eight weeks of age and this is an age at which many meat pigs are purchased. Select a weaner pig that is long and thick. If a 40-pound weaner pig is purchased, the pig will need to gain two pounds per day to reach market weight at five to six months of age. If possible, check out the sow and boar that produced the litter. Do parents have desirable conformation? Talk to the breeder about the potential growth rate of the pigs. Did previous litters reach the desired market weight in five to six months? Did the pigs gain two or more pounds per day while on feed?

There are several popular swine breeds and individuals from any of the breeds have the potential to make a superior meat product. The white, erect-eared Yorkshire, the red-colored Duroc, the white, large-eared Landrace, and the white-striped, black Hampshire are four of these breeds. Often good meat pigs are crosses of these breeds.

If money is an issue, talk with a breeder and ask if any young “runt” pigs are available. There are often one or more small pigs in a litter. These pigs may require round-the-clock milk feeding until they eat solid food (four or more weeks of age). But some breeders will give these small pigs to someone who will take good care of them. If they have good genetics from the sow and boar, they will usually catch up in size with their larger littermates.

Healthy pigs are a necessity for a successful meat-raising enterprise. Consult a local veterinarian or county extension agent about common pig diseases found in your local area. Select a pig from a breeder with a sound health care program. Avoid a pig with a runny nose or other respiratory problems, diarrhea, or a pig that doesn’t look thrifty.

If a pig is destined to be a breeding sow or boar, additional characteristics should be considered. Commonly, gilts (young females) and boars are used for breeding when eight months old. The gilts will have their first litter at a year of age. Check the underline of the pig. There should be two rows of six or more functional teats. It is especially important to watch the pigs walk. Avoid a pig with excessively straight legs, crooked legs, or an unusual gait, because that pig may not have a long, productive life. Since you will be working with the pig every day, select one with a good temperament.

With careful observation and a background check, desirable, fast-growing, and healthy pigs can be selected and the pigs will be “good pigs.” 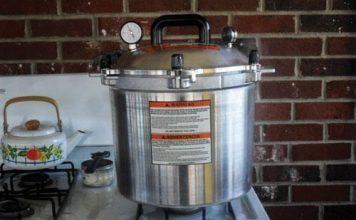