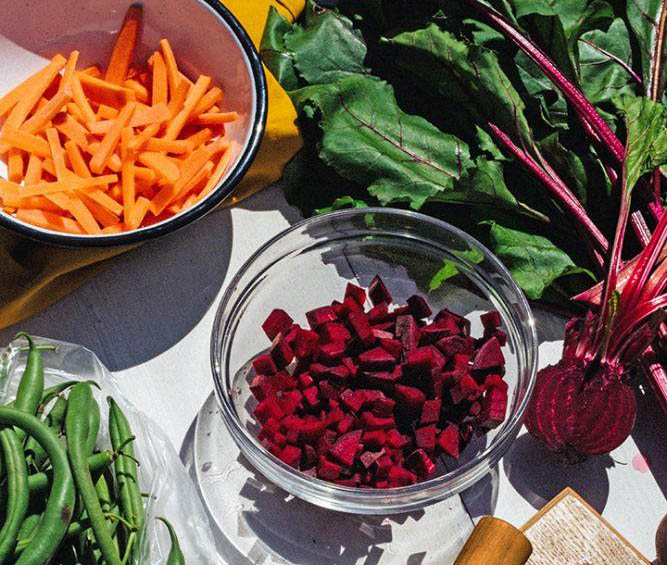 “You mean that from this postage-size garden you grow enough vegetables and herbs to last you all year?” my friend asked in disbelief as he watched me plant my tomato plants in early May. “Not all, but many of the vegetables that we eat year-round, I grow in this garden. However, my garden is also for me a work of pleasure and a reminder of my family’s history.” I grinned as I went about my task.

I was not surprised that my friend was amazed that on this small 25 by 12 feet plot of land, I could grow a good part of our family’s vegetable larder. I even feel astonished myself when, at the time I am planting my tomatoes in spring, our family is still eating frozen tomatoes from the previous year’s harvest. Yet, there is no magic in my garden’s abilities. My success in growing a fine garden year after year goes back to my family’s history.

My parents emigrated from Syria in the 1920s and by the early 1930s were farming on the arid western Canadian prairies. For over a half dozen years, almost nothing grew, but we survived well, mostly from the produce of our yearly garden. Unlike some of our neighbors who barely could subsist and moved away one after the other, our hand-watered garden made sure that we were never hungry.

In Syria, my parents were peasants and had inherited from their ancestors the art of survival in an arid land. When our neighbors’ fields were bare, we grew chickpeas and lentils which needed little moisture. Hence, they were perfect for the dry prairie climate.

Some of the chickpeas, we ate as a delicacygreen or roasted green. However, almost all the chickpea and lentil crops, we reaped ripe and they formed the main basis for our meals. For herbs and tasty greens, in spring my mother would scour the countryside around our garden. Those she did not use fresh, she dried for the winter months.

Our vegetable garden, which we hand-watered from a well, produced enough vegetables and herbs to last us a whole year. All summer we ate the produce fresh and for future use, we canned, dried, or pickled a portion. Others we preserved in our earth cellarbeets, carrots, potatoes, and turnips, covered with soil. With the few bushels of wheat, which even in the driest years we harvested and made into burghal (wheat that is cooked, then dried and ground) and a few chickens, our family ate well the whole year. We barely had any clothes and virtually no luxuries, but our garden produced gourmet meals.

During these Depression years, the taste for green chickpeas and the great dishes my mother prepared from our garden produce never left me. Today, even though I live in the middle of Toronto, the largest city in Canada, year after year I still plant a micro replica of our Depression years’ gardens, growing some of the same produce I relished in my youth.

Every year in early spring, I prepare the soil, except a portion reserved for a half dozen perennial leek and onion plants and two tiny patches of mint and sweet oregano, by adding cattle or sheep manure. Around the first of May, I plant from seed, beets, kohlrabi, turnips, a few cabbage plants, a small patch of chickpeas and a few climbing bean plants at the bottom of an edging tree. A week or so later, I plant one or two eggplant, a few hot pepper and a dozen tomato plantssix ripening early and six later in the year.

In between the tomatoes, I plant a few radish seeds and a number of herbs like basil, caraway, dill, parsley, thyme, and every year without fail, coriandermy favorite herb. A week later I complete the planting with usually three cucumber and three zucchini plants, hugging the edge of the garden. In order to give them room as they grow, I train them to flow away from the garden.

If the weather is fine, the garden quickly begins to flourish, but if there is a cold spell and the temperature dips below zero, I replant the frozen plants and this tends to retard the progress of my garden. In the main after the first planting, the garden takes off.

Beginning in May, we are making leek pies and in early June herb salads from fresh coriander, onions, mint, radish, and sweet oregano. Thereafter, as the herbs grow, I harvest them and what we do not eat, I dry or freeze for winter use. In the ensuing days, the dishes we cook from our garden produce are never ending. Soon the quick-growing herbs and the cooked green tops of the beets, kohlrabi, radishes, and turnips are gracing our table. Not long after we add fresh tender cucumber, cooked green beans, and zucchini dishes.

All summer long I pick tender cucumbers, green beans, and the zucchini when they are about six inches longmostly to be stuffed. However, the garden produces more zucchini than we can use. The extra ones we hollow, then freeze for future use. The scraped-out inner hearts are not wasted, we utilize them in omelets, soups, and stews.

What I always look forward to are the ripe tomatoes about mid-July. They not only beautify the garden but are delicious. Tomato salads in endless varieties, especially with herbs like fresh basil, coriander, and caraway, are now on the daily menu. Always there are more ripe tomatoes than we can use. The extra ones we wash, then place in plastic bags and freeze.

At the same time when the tomatoes begin to ripen, every day I relish a few of the green chickpeas and a few pieces of raw kohlrabi. Usually, by the time autumn rolls around, the chickpeas are finished, but if there are any remaining chickpea pods, I roast them in the ovenfor me a heavenly treat.

In August, we pickle the remaining small cucumbers with dill from our garden into dill pickles; and the large ones become bread and butter pickles. This time also, I pick the remaining hot peppers and dry themour yearly supply. From mid-August to frost time, beet and turnip dishes are frequent. By the time the cold grips the land, I pick the eggplants and make them into one or two jars of garlic-eggplant pickles for the winter months. I then harvest the cabbage and in the ensuing days our family enjoys a number of cabbage roll meals. Shortly thereafter, I pick the remaining beets, kohlrabi, and turnips to complete our yearly supply of pickles.

Pickles made from these vegetables are only prepared in the Middle East, but in my view they outdo pickled cucumbers. The beets, kohlrabi, and turnips are peeled and sliced, then the kohlrabi and turnips are placed in jars. Along with the pickling solution, a slice of beets is placed in each jar. In a few weeks bright red pickled vegetables will always beautify the surrounding dishes being served.

In autumn, when I hear the first rumor of frost, I pick the remaining green tomatoes and wrap them with paper, then place them in a cool place in the basement. As they ripen, we either freeze or eat them. At times we are eating fresh tomatoes from our garden until December.

Almost every year, my garden produces enough of the herbs and vegetables which I plant to last us the whole yearfresh in summer, and dried, pickled, or frozen the remaining months of the year. Yet, this is not all my gardens’ attributes. Even though it produces much of our family’s vegetable needs, it is also to me a springboard of pleasure and enshrines the history of my family.

Recipes from my garden

Place tomatoes and coriander leaves in a salad bowl, then gently toss and set aside.

In a small bowl, thoroughly mix remaining ingredients. Pour over tomatoes and coriander, then toss just before serving.

Combine dandelion, parsley, coriander leaves, and tomatoes in a salad bowl, then set aside.

In a small bowl, thoroughly mix remaining ingredients, except olives, then pour over salad bowl contents. Toss, then decorate with olives and serve.

Allow the dough to thaw, then set aside.

Make a filling by thoroughly combining all remaining ingredients, then set aside.

Form dough into 20 balls, then place them on a flowered tray. Cover with a damp cloth, then allow to stand in a warm place for 30 minutes.

Roll balls into 5 to 6 inch rounds, then place 2 heaping tablespoons of filling on each round, stirring the filling each time. (Preferably the filling should be divided into 20 equal parts.) Fold dough over the filling, then close by firmly pinching edges together into half moon or triangle shape.

Place pies on well-greased baking trays, then bake in a 350°F preheated oven for 20 minutes or until pies turn golden brown. Remove from the oven, then brush with olive oil. Serve hot or cold.

Heat oil in a frying pan, then fry zucchini slices until they turn golden brown, adding more oil if necessary. Remove and place on a flat serving platter.

Prepare a sauce by combining remaining ingredients, then spoon sauce over zucchini slices. Allow to stand for an hour before serving.

Rinse out a teapot with hot water, then add tea. Pour in ½ cup boiling water, then, to remove bitterness, swish around in the pot quickly. Discard the water, but make sure not to throw away tea. Add mint, sugar and remainder of boiling water, then allow to steep for 3 minutes. Stir and taste, adding more sugar if necessary before serving. Note: For second helpings, leave mint and tea in pot; then add a teaspoon of tea, several mint leaves, and some sugar. Add again the same amount of boiling water. When mint rises to surface, the tea is ready. Stir and taste for sugar, then serve.

Peel, then dice eggplant into about ¾-inch cubes. Place in a strainer in a sink, then place heavy weight over top of eggplant cubes. Allow to stand for an hour in order to drain.

Heat oil in a frying pan to about an inch deep, then fry eggplant cubes until they begin to brown. Remove with slotted spoon, then drain on paper towels.

In the meantime, combine remaining ingredients, except tomato and parsley, then set aside.

Place eggplant cubes on a serving platter, then decorate with the tomato and parsley and serve.

Preparing for a Temporary Catastrophe