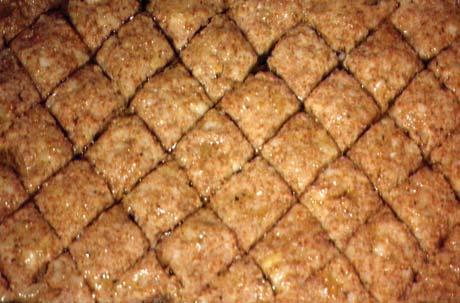 Pistachios (Pistacia vera), whose name derives from the Persian word pisteh, is believed to have originated in Iran. For thousands of years they thrived in western Asia, in the area from Syria to Afghanistan. They were prized for their creamy flavor and nutritious value by royalty and the elite in the ancient world, and were the favorite nuts in the imperial court of Queen Belghais of Sheba. Interestingly, they are one of only two nuts that are mentioned in the Bible.

During Roman times the pistachio tree was introduced to Greece and Italy from Syria. Some historians indicate that after the fall of the Roman Empire, the cultivation of pistachios disappeared from Italy and were later re-introduced by the Arabs to Sicily after their conquest of the island. In his book Islamic Sicily, Aziz Ahmad states the name of the “pistachio” possibly came into Sicilian from Arabic then moved on into the other languages of Europe.

Pistachios were introduced to the United States by a Syrian immigrant in the late 1890s and began to be cultivated commercially in California. Today, the state’s annual production is second only to that of Iran, the largest producer in the world. The vast majority of the world supply of pistachios is consumed in the United States.

Also known as the green almond, the pistachio is related to the cashew. The tree, growing at times up to 30 feet tall, thrives in stony, poor soil and in lands with cool winters. It does well in high heat with a bit of moisture, needing little care and living, at times, for centuries. Its attractive foliage and clusters of reddish wrinkled fruits makes it an eye-catching ornamental plant.

The nuts are harvested when the outer husk covering the shell loosens and falls off easily when the tree is shaken. The husk covers a pale green nut encased in a beige-colored shell. A single tree in its prime can produce some 50 pounds of husked nuts. When placed in airtight plastic bags and stored in a refrigerator, unroasted and roasted pistachios will last for months. When frozen, they will last for years and still retain their flavor and mineral content.

Considered one of the best of the well-known nuts, 80-90% of pistachios are roasted and salted in the shell and consumed as snacks. Unroasted, shelled pistachios have a sweet flavor and are used in cooking.

Unsalted pistachio nuts are a very healthy food, but rich in oil which can add to weight problems. They have a high-potassium, low-sodium content, and help regulate the body’s fluid balance, especially aiding in normalizing blood pressure. They are also an excellent source of protein and have a good amount of calcium, iron, phosphorus, thiamine, zinc, vitamin B6, and vitamin E.

Pistachios are cholesterol-free and contain 165 calories per ounce, which is low compared to other nuts. They are high in fiber and low in saturated fat, but contain a good amount of monounsaturated fat, leading to a cut in the risk of heart attack. Pistachios also contain an antioxidant that has been associated with a decreased risk for developing diseases such as cancer.

Much used in Middle Eastern, Mediterranean, and Indian cuisines, unsalted pistachios are an excellent addition to vegetarian diets. They are superb when used as ingredients in appetizers, breads, cookies, ice creams and other sweets, muffins, pâtés, pesto, salads, sauces, stuffing for fish and meats, and vegetarian foods, as well as for garnishing.

These kitchen uses and their healthful attributes are appreciated in many countries, especially in Syria where visitors are often given a bag of pistachios as a parting gift. Perhaps these recipes will give you an idea as to why pistachios make excellent gifts.

Place potatoes in a bowl and set aside.

Place remaining ingredients in a blender and blend for one minute. Thoroughly stir the blender’s content into the potatoes, then spread on a platter and serve. Serves 8.

This gourmet delight makes a rich addition to the vegetarian kitchen.

In a strainer, press water out of burghul then set aside.

Place pistachios, 1 cup of the onions, flour, 1 tsp. of the salt, ½ tsp. of the pepper, allspice, cumin, cinnamon, cayenne, 2 Tbsp. of the oil, and the burghul in a food processor; process into a coarse paste and set aside.

Heat 3 Tbsp. of the olive oil in a frying pan, then stir-fry remaining onions and garlic over medium heat until they begin to brown. Stir in remaining salt and pepper; set aside.

Heat oil in a frying pan, then sauté pistachios until they begin to brown. Stir in remaining ingredients and serve warm. Serves 4 to 6.

Thoroughly combine all ingredients until honey coats all pomegranate seeds and pistachios. Place in a serving bowl. Chill and serve. Serves 6.

Transfer to a serving platter and allow to cool for one hour, then sprinkle with the pistachios just before serving. Serves 6.

Place icing sugar on platter, then roll balls in icing sugar. Place on a serving tray, then sprinkle with remaining icing sugar, and serve.

Place sesame seeds, pistachios, and honey in separate bowls; then set aside.

Place eggs, butter, and sugar in a food processor and process into paste. Transfer to a mixing bowl, then add flour, wheat hearts or semolina, baking powder, and salt. Knead into a dough, adding a little water if necessary.

Form into golf ball-sized balls then press balls, one at a time, into the pistachios and flatten with fingers on greased baking trays. Continue until all the balls are finished, then brush each cookie with honey and sprinkle with the sesame seeds.

Bake in a 350° F preheated oven for 15 minutes or until the cookies turn golden brown, then remove and allow to cool before serving. Makes about 40 cookies.

Lower heat to medium-low and cook, stirring constantly, until syrup begins to thicken. It will be ready when a little is dropped into cold water forming a hard ball. Remove from heat.

Keep refrigerated until ready to serve.