I’ve been a little busier than usual these last three days. David went down to hunt with his brother, Bill, and his friends near Oak Lake. And he came back Monday with 180 pounds of venison, in quarters, in the trunk of his new-to-him car. Luckily, Bill has huge, heavy duty contractors’ bags, so the trunk didn’t get all nasty.

No. It wasn’t David’s buck this time. Bill’s friend, Andy, had shot a big nine pointer. Of course he wanted the antlers, but they had just butchered a steer and are hunting an area where you are allowed 5 deer. Five deer! Mostly, Andy wants to continue to hunt and doesn’t need the meat, so he sent his deer up to me. Thanks Andy!!! 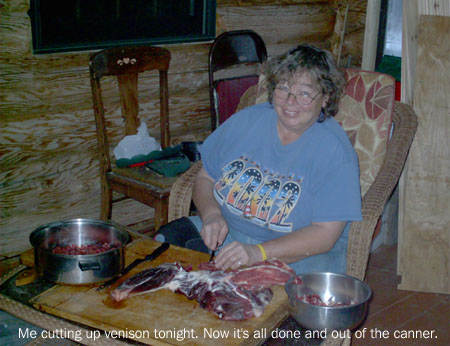 And not one to look a gift deer in the mouth, I set about cutting it up the day after I got it. I’m a little slow and a lot picky. So I can only do about a quarter of a deer a day, including canning it up. The first day I did a hind quarter and the back straps. I made a big batch of jerky out of that batch so that I could get it dehydrated in time to send some back to Andy and the “boys” at hunting camp this weekend. (All Andy wanted from his deer was a “quart jar full of jerky”.) I made terriyaki jerky this time. And I used a backstrap and some nice rump meat, sliced across the grain to make it tender. I don’t use poor cuts for my jerky!

I had three pans in front of me when I cut; one for stew meat and roasting chunks, one for jerky slices and one for yucky parts.

To make my jerky, I used 1 c soy sauce, 1 Tsp garlic powder, 1 Tsp onion powder, 1 Tbsp sesame seeds, 1/2 c brown sugar, mixed well. I poured this over my meat, which I had sliced about 1/4″ thick. Then I mixed it well and covered it and let it sit in the fridge all afternoon. You can leave it overnight, but my generator only runs at night so I needed to use my dehydrator then.

I lifted one piece at a time out of the bowl when I was ready, letting it drip well. Then I spread them in a single layer on the dehydrator trays, stacking the trays until it was all ready. I plugged in the dehydrator and let it dry all evening. It was almost ready that night, but I took the whole works out on our unheated porch for the night and next day and brought it in the next night to finish up. Of course when it was done I let David be my taste tester. He gave it a 2 thumbs up, then I tried a piece. Not bad. If I get to eat any more!

I did the third leg, a front shoulder tonight and canned that all up as stew meat, which is what I use most. David has a karate tournament tomorrow morning and we will be driving down to meet him. He went down tonight so he can hunt with the “big boys” tomorrow morning. So we’re having a full weekend! But with an inch or two of snow on the ground, we know that winter is just around the corner and are getting in as much as we can. Things are kind of seasonal here; I don’t like driving far with my 91 year old mother in the car.

I’ll finish up the rest of the deer tomorrow night. It looks so nice lined up on my pantry shelves in the basement. Now if David could just get his deer…… With Mom, me hunting this year is out of the question; she can’t be left alone that long. But like all things, we’ve learned to adjust.