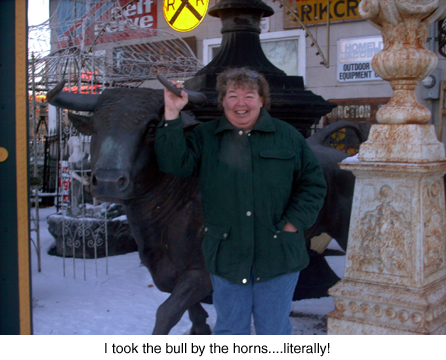 What??? Okay, I confess. I’ve been writing and visiting on the phone with a real nice guy from Washington for about 18 months now. Will’s been tied up there and I’ve been tied up here, with taking care of Mom and all the normal homestead goings-on every day. But when David had no school Monday and I got a real deal on a flight I found on the internet, I decided to take Will’s invitation and go on a mini-mini vacation, spanning a whole four days. Well….three actually, because one was pretty much taken up flying with all the lay-overs.

I did have problems getting help taking care of Mom, but my friend Jeri about shoved me out the door, saying that she would help David with her personal care and that they would handle things. (Not only do she and her husband, Jim, help me butcher chickens, but are also real good friends, too!) I went about nuts getting things organized for my trip, not even packing until the last day, but finally I was on the plane, flying west.

I had a few interesting moments on the flights. For instance, the plane from Minneapolis had problems with its computer system and had to return twice to the gate for repairs (that really breeds confidence!), there was freezing fog in Spokane, where I was going and I had to sleep overnight in the Seattle airport.

But Will met me at the airport with a rose in his teeth. (That’ll work.)

So what did we do on our hot weekend? Well we did the usual romantic stuff, swimming pool, hot tub and a nice dinner. Talked till 2 a.m. that night. It was SO nice. Then he got sick with the flu! Yep, throwing up all night. Poor guy! Here he is on a “first date” and is entertaining me by running for the bathroom.

However the next morning he felt quite a bit better and took me to a great antique ironworks shop, Ruby Street Antiques in Spokane. That was really neat. They had tons of statues of marble, concrete and metals, along with fancy wrought ironwork and smaller things. Then inside two houses, there were uncountable pieces of cool furniture and other decorative items. (Want an angle, dragon or full sized fighting bull?? They have it!) Or coat hooks designed with ears of corn or pumpkins? Yep. You get the idea. I spent a whole $35 and brought home some of the corn and pumpkin coat hooks and three iron hook racks; one an elk, one moose and another a horse with a blacksmith. 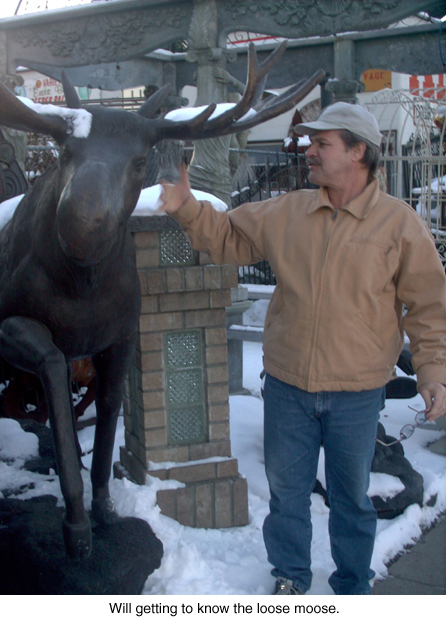 We also did Home Depot. Um hum. We played with their tools, petted wood, discussed different floor tiles, then spent an hour in the kitchen cabinet displays. Will is a talented carpenter who is also a devoted homesteader. He knows we’ve been living without kitchen cabinets for two years now, and I told him awhile back that I’d wait until he could come to Minnesota before I built them. He want’s to be a part of that, and it’ll be nice.

Unfortunately, his flu surfaced again, but not as bad. We couldn’t go or do much more because of it, but we did spend hours and hours just sitting talking and going over my plan book and his. It’s nice to find someone who is excited about the same things you are and we had plenty to talk about.

All in all, it was a date to remember. But really, it was nice. Real nice. And hopefully, in a few months, he’ll be able to come join us here in the backwoods. It feels good to be smiling about a future again.

I have opened a 8 year old five gallon pail of white rice to “check” on it. I would very much like your thoughts on preserving/canning white rice. I did read where you canned raw rice with carrots/onions/celery but you didn’ give processing times. I would like to make a pilaf with broth, veggies and cooked rice then can it. Have you done this and would you recommend it? What about
canning the rice dry? Thanks for all that you do in teaching us to take care of ourselves. I love your articles.

I don’t recommend canning dry rice; it isn’t necessary. I’ve cooked rice that was 10 years and older and it was just fine; no off tastes, provided that it was kept in an airtight container that bugs and rodents couldn’t access.

I do can many recipes with rice as an ingredient. Generally, I can meat based soups and stews with rice. In this case, you just process it for the time required for the ingredient that requires the longest processing time, such as meat broth or corn. I have not canned dense packed rice, but HAVE canned Spanish rice etc. that I do up a bit “wet” and dry it later after opening on reheating. You have to watch very dry, packed foods, to make sure that they heat all the way to the center of the jar so you get the right length of time for proper processing at a high enough temperature…all through the food. — Jackie

I have been learning canning this past summer and canned peaches. The peaches turned out pretty well but despite packing as many as I could prior to cooking I had two problems.

1) All the peaches floated to the top and shrunk(?) leaving lots of space at the bottom.
2) I used pressure cooking and the syrup boiled out leaving the space at the top of jar. How can I keep that from happening.

The peaches seem fine and the seal remains unbroken months afterwards. Maybe it is just a visual thing.

No problems with the peaches. They simply floated to the top because you cold packed them (put raw peaches into the jar and poured hot syrup over them). If you hot pack them, heating the peaches in the syrup, then packing the hot peaches and syrup into a hot jar, you have no more floating peaches. They actually don’t “shrink”, but some of the juice seeps out of them and mixes with the syrup, leaving them smaller. You probably would like your peaches better if you water bath canned them as you won’t have trouble with liquid boiling out of the jars as they process. This looks less nice, but in no way affects the taste or safeness of the food. — Jackie

What’s the saltpeter for?

In an old sugar meat cure recipe it calls for 2 ounces of saltpeter. This recipe is well over a hundred years old and I was wondering what the saltpeter does in the meat curing process? The recipe is as follows

Is there a modern equivalent to saltpeter or can this be left out altogether?

Saltpeter is used to not only keep the red color in cured meats, which can turn an unappetizing grayish tan, but also to inhibit botulism and keep the meat from developing off tastes. Yes. You can certainly leave it out of cured meat, but you just need to handle the cured meat very well after the curing. For instance, you can freeze or can it. Both will prevent any of the above problems from surfacing. — Jackie