Our beans are in! And so are our peppers. This year I’m making batch after batch of Cowboy Candy, a candied jalapeño. Wow, are they ever good and really not all that hot. Especially when I mix Early Jalapeños with Fooled You, which aren’t hot at all. Here’s the recipe if you’d like to try them:

Slice jalapeños. If you don’t want so much heat, cut off top and cut out seeds and ribs before slicing ¼ inch thick. If you are sensitive or can’t keep from wiping your eyes (burns like crazy if you do!), wear plastic gloves.

Add all ingredients but peppers into a large pot. Bring to a boil, stirring frequently, and simmer for 5 minutes. Add peppers. Bring to a boil and simmer 4 minutes. With a slotted spoon, remove peppers and pack into half-pint jars. Bring syrup to a boil and boil hard for 6 minutes. This thickens the syrup somewhat. Ladle over sliced peppers, leaving ¼ inch of headspace. Wipe rim of jar, add previously simmered lid, and screw down ring firmly tight. Process in a boiling water bath canner for 10 minutes.

These are great on creamed cheese and crackers. Or about anything else! Yum. 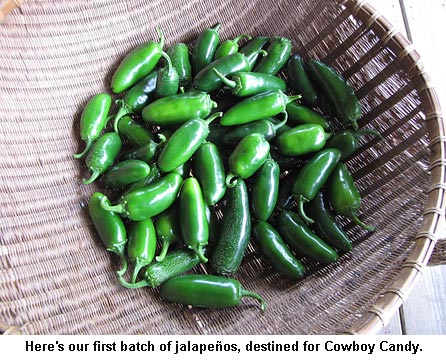 Our bean crop is phenomenal this year. I only planted two short rows of Provider bush beans because I still have shelves full of canned beans. But those rows have given me four basketfuls of beans so far, and they’re still producing like mad. I canned plain beans and Mustard Bean pickles. Tomorrow it’s Dilly Beans. Guess why I love Providers? And they get pretty big but are meaty, with small seeds until they are pretty mature, so they last on the vine for quite a while before going seedy. 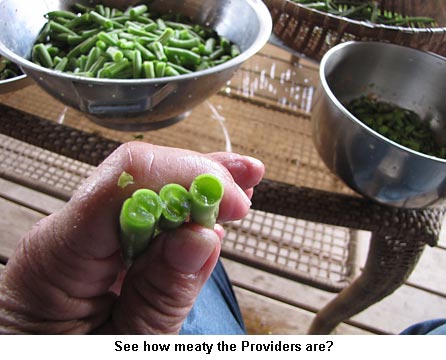 This year we tried a new pole bean, Neckargold, after our friend Dara raved about them last year. Our vines are covered with flat, long, tender gold beans. We ate one batch to try them, and they are tender with very good flavor. This is another keeper! 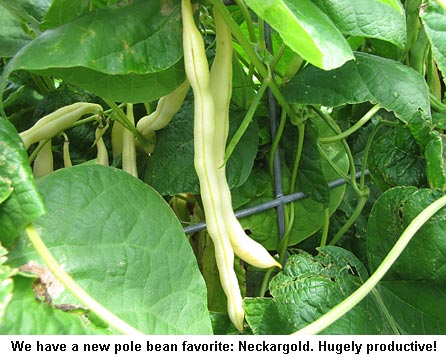 We are getting such a kick out of the batch of chicks that were hatched in our front yard. They run here and there, gobbling up bugs, grass, and seeds. We think they’re mobile yard ornaments! They’re so entertaining. Who needs TV? — Jackie