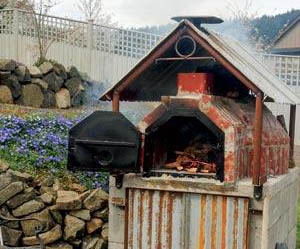 About a year ago, my wife and I traveled around Italy by car. We had lots of wood-fired pizza. Italians make their pizza very thin with some sauce, cheese, and very little topping. If you order pepperoni pizza, you don’t get meat  just green and red peppers. 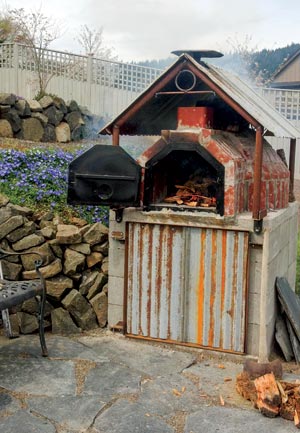 The finished pizza oven, with fire lit. After heating the oven, the burned-down coals are shoveled to the back, then the pizza slipped in to bake.

Now, I’m a man who builds what his wife wants. After our trip to Italy, it was a pizza oven. I am not a professional pizza-oven builder, but I am a homebuilder with lots of hands-on construction experience.

I decided to build an igloo-type oven. It takes a little more time than just a simple half-pipe style, but I think the igloo looks cooler and is more efficient than other types of outdoor ovens. The walls of the oven are solid red bricks, and it is built on a base of concrete blocks with a poured concrete slab foundation and top. The steel door that I made seems to help hold the heat but is not necessary. (You should not make the door self-latching for child safety reasons.)

The total cost of this project was just about $300. If you don’t mind loud, obnoxious music, you can see unlimited designs of pizza-ovens being built on YouTube (with no verbal instructions).

First, decide where to build the pizza oven in your yard.

I poured the slab to fit standard 7-inch-wide CMU (concrete masonry units) without cutting or staggering blocks. (My base is 44 x 48 inches ­ the back wall is two blocks wide, plus the blocks that form the sides; the side walls are three blocks long.)

The slab could be a little larger than the footprint of the blocks. I made mine about 5 inches thick with 3/8-inch rebar around the sides and a cross grid of 12 inches. The forms don’t have to touch the ground; you can mix the mud thick enough so that it won’t run under the forms. I jabbed vertical rebar into place before the concrete got hard  one rebar for every block cell.

Once the slab is dry, lay the blocks for the base. I didn’t lay my blocks with mud as I needed the block cells filled with concrete anyway. So I dry stacked them, using small wood wedges to tilt the stack to be plumb and straight when I filled the cells. This trick worked very well and I was now ready to form the top.

I made the top slab 6 inches thick, mostly to act as a heat sink. The vertical rebars which were sticking out of the blocks were bent to horizontal so that they laid in the top slab, then I tied in another 12-inch rebar grid. I reused the edge forms from the foundation slab to form the edges of the top. To hold the upper forms in place, I propped them up with some 2-inch boards around the outside of the base. Then I cut a plywood floor for the bottom form and supported it with about six vertical posts. The floor form should be cut about a half inch smaller so that it will come out after the concrete is poured. Pour the concrete into the form, then let it dry before you remove the forms. 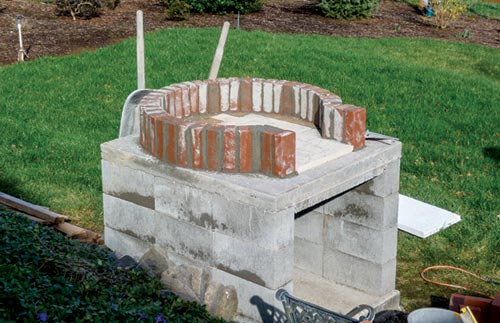 The size of the base doesn’t really matter;
it just needs to be big enough to support the oven. 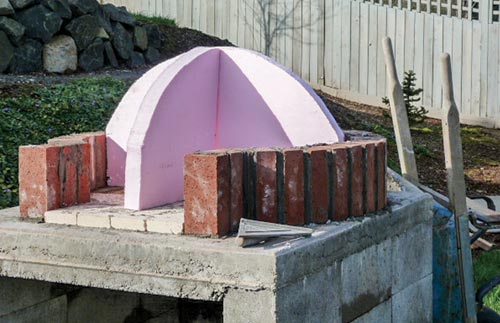 This styrofoam will be your guide while laying out the rest of the bricks.

I used thin 1¼-inch-thick fire bricks to create the floor of the oven. You could use the standard size if you want more of a heat sink. I laid out the fire bricks on top of the upper slab, then traced a circle that was about 8 inches smaller in diameter than the base was wide. This way there is room for the red oven bricks to sit around the edge of the fire bricks. To draw the circle, I measured to the center and drilled a small hole to set a nail for a pivot point, then hooked a tape measure and held a pencil to the right size and drew my circle. You can save some bricks if you mark half the circle, cut those bricks, and use the pieces for the second half.

Before laying the red oven bricks, you should know a little about mortar. I used a Type S brick mortar. The consistency should be so that when buttered on the brick in the right shape, you should be able to lay the brick in place with just a little nudge and maybe a tap with your trowel. It will probably surprise you how thin a mix you will end up making to do this. The buttering part is important in this process and needs to be shaped for the space to be filled. In this case, it needs to be thinner on the inside and thicker on the outside. If you mess up, just scrape the mortar off into the batch and try it again. Another thing that you will notice is how well the bricks will stick unsupported, especially on the wide face.

You will need a form or guide to shape the dome of the oven. I used Styrofoam sheet material cut into the round shape of the dome, then cut more pieces to cross at the middle, and more yet to divide it into eight. The inside height on my oven is 18 inches, so that’s how high I cut the forms. I used nails to hold the pieces in place. You won’t need the forms to keep the bricks from falling until you get near the top of the dome. I didn’t always stay right on the forms until near the top when I needed a wedge or nail to hold bricks in the right place.

Bricks can be sawn with a diamond blade saw. They can be broken into a shape also, but it’s not too pretty. I would recommend a wet tile saw or brick saw; the brick dust is pretty bad otherwise. They can be cut with a small side grinder with a diamond blade, but it’s not as safe. Abrasive masonry blades are not very good as they wear out fast and will end up costing more. 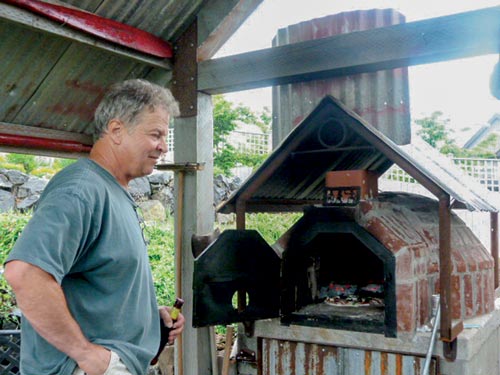 Pizza in the oven, ready to bake. You can see the red coals still in the oven. 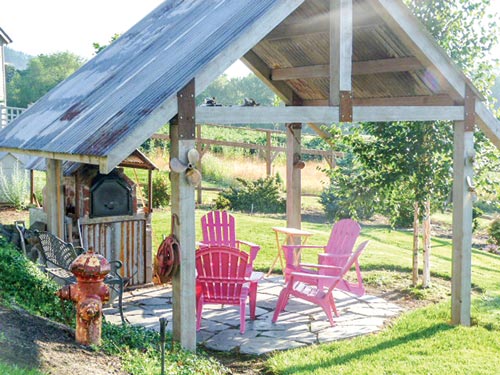 The completed pizza oven is now protected by a covered
patio and makes a perfect gathering spot in our yard.

The first course is the easiest to lay because you won’t need to cut any bricks. They can be set vertically as in soldier coursing. The next course was laid vertically, but cut on the bottom and outside. For the next several courses you will need to use half bricks laid flat  because of the radius the long bricks won’t work.

The closer you get to the top, the more cutting you will need to do. The bricks will need to be shaped something like a dove-tail tapered two ways. The front of the igloo is almost like a separate structure and the best way to describe joining the two sections is to say it is faked together. When I worked up to near that area, I laid up the front then joined the round part. After a few days the forms can be sawed out.

Some people cover their oven with insulation and plaster. I didn’t need it to stay hot that long and I liked the look of the brick. The bricks absorb water in the rainy season, so it takes longer for them to dry out. To remedy this, I built a cute little roof over mine.

It’s a good idea to start planning a patio or at least a gravel area in front of the oven, as the grass will get trampled. After a few months of frequently using our pizza oven, I decided to build a covered patio structure over it.