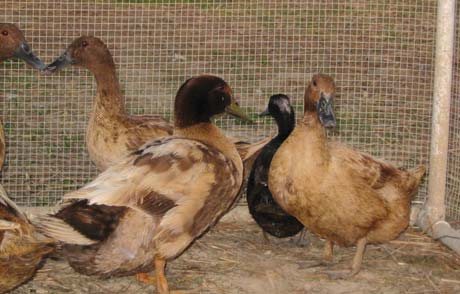 Spring brings the pitter-patter of little feet in the mud, games of tag, and raucous quacks. While traditional advice would have you with a yard full of chickens, I heartily recommend Khaki Campbell ducks.

Living on a fifth of an acre in a development, I opted for raising ducks over chickens for several reasons. The drakes do not crow as roosters do, so it won’t bother the neighbors if I keep them around. That means we can hatch our own eggs at a later date. They convert feed to meat efficiently and grow quickly. Ducks are fun to watch, splashing in the water and waddling about, which, more importantly, the neighbors appreciate. This has been immeasurably helpful in keeping the peace. Given these factors about ducks, it was a matter of determining breed.

Khaki Campbell ducks were developed by Adele Campbell in Gloucestershire, England. Crossing an Indian Runner duck and a Rouen, she was looking for a duck that would have a fairly large body but produce many eggs. And produce, they do, laying nearly 300 eggs per year. The most productive heirloom varieties of chickens will only average 180 eggs. At butchering age, between 8-10 weeks, they will dress out between 4 and 4½ pounds, about the size of a large chicken. Raising ducks is a fairly simple affair, much like raising chickens, so long as you’re ready before they arrive.

We ordered our ducklings from a hatchery. I ordered five females and five straight runs (unsexed), thinking that we would get at least five egg-layers, even if all the straight runs turned out to be male.

Other people who ordered ducklings through the mail said their post office had called first thing in the morning when their package arrived. Mine did not call until two in the afternoon. I’m not sure if the delay had anything to do with it, but one of the ducklings was dead and another died shortly thereafter. I would suggest contacting your post office before the ducks arrive so they are aware that you have living creatures coming.

After bringing your ducklings home, you’ll need a place to put them. Kiddie pools make an excellent brooder. I filled it with litter, put in a chick waterer and feeder, and attached a light I bought at the farm supply store for less than $10. Upon first introducing the ducks to the brooder, you should dip their beaks in the water so they know where it is. Feed them unmedicated chick starter for the first three weeks. As they get older, you can start putting shallow dishes of water with finely shredded greens. They love trying to catch those floating pieces. While they are small, handle your ducklings enough that they become accustomed to you. I didn’t, and mine still run from me, despite the fact I’ve been feeding them for the last ten months.

When the ducklings are two or three weeks old, they are probably jumping out of the brooder. It’s time to introduce them to the outside world, if it is warm enough. Determining the space requirements for each bird, I designed a house and pen for them. The pen is moveable, created out of PVC pipe and hardware cloth. The house was built out of plywood, with a large side-door for egg collection and a smaller door for the ducks to enter or exit. For fun, the brooder can be reverted back to its original purpose so that the ducks can splash around. They don’t need water to play in, but they sure do enjoy it. Just make sure your pen is wide enough to fit over it.

Fulfilling their nutritional needs is easy enough. Even without a pond, ducks require more drinking water than chickens, as they immerse their entire bill in the water. You can supplement their feed with vegetable scraps from the kitchen or weeds from the garden. They are a feathered solution to an infestation problem. Surprisingly swift, I’ve seen them snap a fly out of the air. Though slugs may be a bane to your garden, they are a delicacy to your ducks. During the winter, I approach small supermarkets about over-ripe vegetables for feed. Beyond food, water, and shelter, the only other requirement is calcium.

As the ducks start laying eggs, you will need to provide calcium for proper egg formation. I feed mine powdered eggshells. Though I can’t necessarily endorse it, my ducks do not suffer from the practice. Whenever I crack open an egg, I wash out the shell and let it dry. Once I’ve accumulated enough, I put them in the oven at a low heat and then grind them up. Instead of doing this, you could buy ground oyster shells from a farm supply store. Add the source of calcium to their feed, replenishing it as it disappears. This practice will keep the shells strong and blemish-free.

Speaking of eggs, the taste of a Khaki Campbell egg is sublime. Because they forage for bugs and weeds, their eggs are flavorful and rich. After being fed duck eggs, my ten year old nephew now refuses to eat chicken eggs. Several people at work are now addicted to them, so I have a small side-business which covers the cost of the feed. Furthermore, the duck eggs are superior to chicken eggs in baking. They give more lift to baked goods, which is why French bakeries will only use duck eggs.

Although Khaki Campbells are egg laying machines, they have no interest in hatching out their offspring. In the event you want to raise ducks to butcher or hatch more layers, you will need an incubator or a broody duck or chicken. A Muscovy duck will work well for this purpose. Since I have access to an incubator, I have opted to go that route for raising more ducklings. Between 8 and 10 weeks old, I butcher some for my larder and sell some to interested parties.

Daily upkeep is a snap. Every morning I push the pen up to the house, letting the ducks into it, then I move the pen to a place with grass for them to forage, choosing a different place everyday. I give them plenty of water and a set amount of food. Returning to the duck house, I collect the eggs. At night, I just do it in reverse, sans the eggs. I spend about twenty minutes a day on them, so long as I don’t get distracted by their antics. When the bedding in the house becomes dirty, which is every three weeks or so, I can replace it with fresh bedding in about half an hour.

For a bit of preparation and minimal effort, Khaki Campbell ducks will reward you with many eggs, tasty meat, and hours of entertainment. They would be an excellent addition to any homestead.