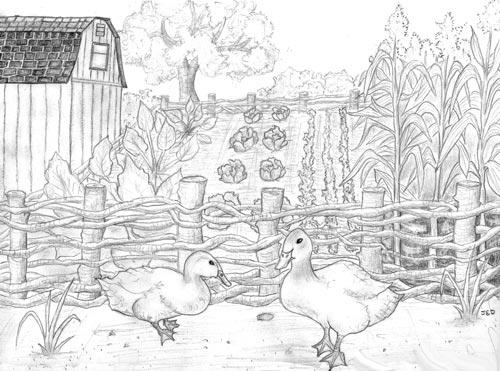 Wattle fences are made by weaving material in and out of posts in the ground. They were often used on the small farms of Victorian England. In fact, during those times there were craftsmen who made their living by making movable wattle fences called hurdles. This craft has gone by the wayside as more modern fencing options have come into use, but wattle fencing can still offer an inexpensive way to provide a fence wherever needed. Wattle hurdles can provide easy-to-move fencing to temporarily separate livestock or pastures. They are easy to make, require no special equipment, and can be made from many different materials. In fact, wattle fences are a great way to clear out the undergrowth in a woodlot or elsewhere around the property. It is hard to see how the knowledge has almost been lost when there are so many benefits to wattle fencing.

The first wattle fences we made around our little farm were designed to keep the ducks out of our garden beds. Since our duck pond was in the middle of the garden space, we had a terrible time with the ducks eating all of our leafy greens and tearing up whatever they wanted to taste. A wattle fence around each garden bed was a good solution because the ducks were kept out of the plants, but they were still near enough that we were able to reap their bug-hunting benefits.

To build this fence we selected some 2-inch diameter oak and bamboo for the stakes. The wood works better if it is green and fresh. We placed these stakes two feet apart all around each section of the beds, leaving a space for an entrance into each section. Next we took some long branches and small trees that needed to be cleaned out of the pasture and woodlot. These trees averaged between two to three inches in diameter. You want the trees and branches thin enough to be flexible, but long enough to wind around several of the posts for added stability. On the first fencing section we didn’t get the branches and trees long enough, so we had to do some tweaking later to improve the stability of the fence. However, for the next sections we chose trees that were 10 to 12 feet in length, which allowed them to wind in and out of several posts. This gave the rest of the fencing sections much more stability and we had very little adjusting to do afterwards. This garden fence was only two feet high, just enough to provide a visual barrier to keep the ducks out of the garden spaces while the seedlings were coming up. 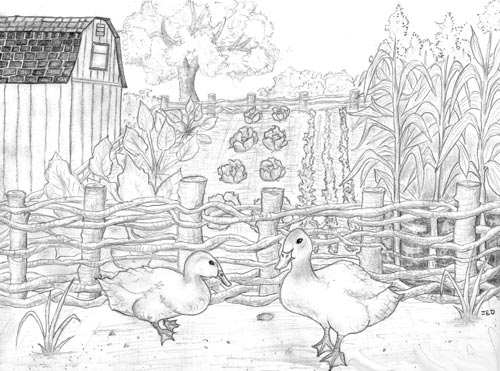 The next wattle fence we built was to fence in a yard for the chickens around the chicken coop. Our flock of chickens had decided that they didn’t need to go back to the coop at night. Instead they chose places like my front porch, the goat barn, and my children’s play equipment to roost on at night. This was, of course, unacceptable because of the mess they left behind. It became such a hassle to catch 30 chickens roosting in various places around my house, yard, and barn that we decided to build a fenced-in chicken yard. This fence needed to be much stouter than the little garden fence we had previously built so the upright supports were approximately four inches in diameter and about five feet tall. We spiked one end of the support with a hatchet before driving them into the ground with a sledgehammer. These posts were spaced two feet apart. Again, we used tall thin trees that were at least 12 feet in length and averaged about 3 inches in diameter to weave around the supports. We started weaving at one corner on the outside of post 1, moving inside to post 2, again outside to post 3, then inside to post 4, and so on until the branch ended. If we ended on post 5 then the next branch was started on the opposite side of post 4 from the other branch already crossing it. Continuing in this fashion, we “wove” the branches together to form a sort of basket-type weave, giving the fence more strength and no weak spots. We built this fence to a height of four feet and it was strong enough that the goats stood on the fence trying to reach tree branches and never broke through or damaged it. All of the small branch cleanings off the trees were used to stick upright into the uppermost weave, giving an additional three feet of height to the fence and creating a screen to keep chickens from flying over. This fence has worked well to contain most of our flock, but we have had two or three determined hens that have managed to work themselves over and through the upright twigs.

Wattle fencing is certainly cheap enough, using materials that otherwise have little use. It doesn’t take much time. The garden fencing took about two full days to gather and cut the materials and then put them into place. The chicken fence took about a week to complete.

The best benefit yet has been the compliments that we get from visitors to the farm about how great the fences look. They certainly do have an aesthetic appeal. The only drawback we have found is that when we use smaller stuff like twigs and thin branches the fence settles and loses height. We have experienced this in the garden. However, it has been easy to fix as we smash the horizontal twigs down a bit and then add new ones to the top. We also had a couple of the upright posts in the garden rot at the ground and we simply wiggled them a bit to get the bottom to fresh dirt and pushed them back down. When they get too short to use, they won’t be that difficult to replace. We certainly recommend using wattle fences around the homestead and will be implementing more of them in our future. 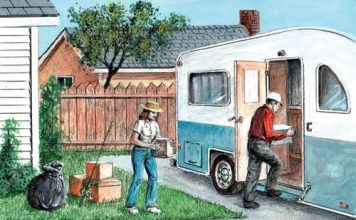