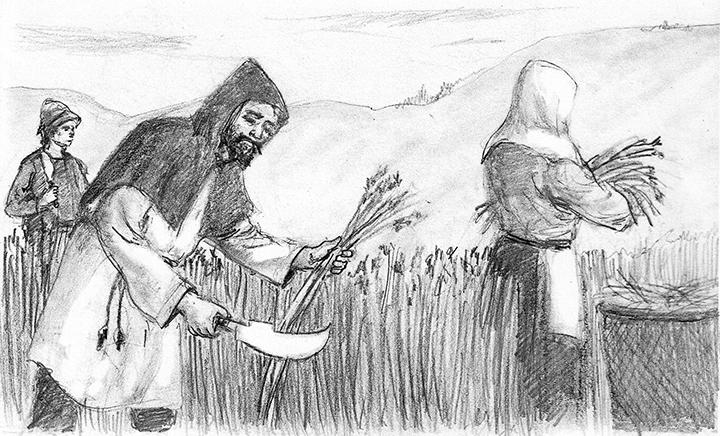 When compared to our ancestors, we are very lucky to have readily-available tools. Stores are full of anything you could need and with online shopping, you don’t even have to leave the house. The trouble comes when we must discern between a quality tool and a silly gadget. The best way I’ve found to do this is to look for a type of tool that has been around for a long time. The crucible of longevity proves a design.

Like every land owner I know, I have brush to clear and trees to prune and the best tool I’ve found to do those jobs is the ancient billhook.

What is a billhook?

With its distinctive wide, hooked blade, the billhook has remained relatively unchanged for at least 3,000 years. Throughout the centuries, it has been used to cut brush, prune vineyards, and build hedgerows and fencing. It is as useful today as it was in Medieval times. Common people of that era had few metal tools, but we can infer that the billhook was quite widespread in the country side by the saying, “By hook or crook,” which comes from the practice of letting peasants collect firewood from the forest with (bill) hook or (shepherd’s) crook. The practice kept the forest open for the horse-riding nobles and allowed for the collection of fuel in a managed way. 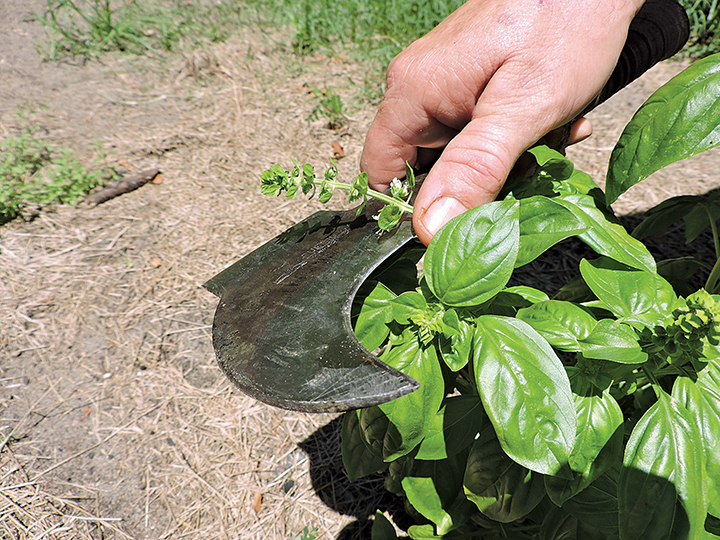 The billhook is a versatile tool. The straight section between the handle and hook can be used like any other knife. The hook can strip the bark from saplings as well as function like a drawknife to smooth and shape. You can tap the back edge of the billhook with a club to start a split and use the width of the blade to twist the split open just like a froe. In the garden, the billhook can be used to build fencing, trellises, and tomato cages from saplings. Plus, it can cut greens, squash, corn stalks, or any other cutting chore you can think of. 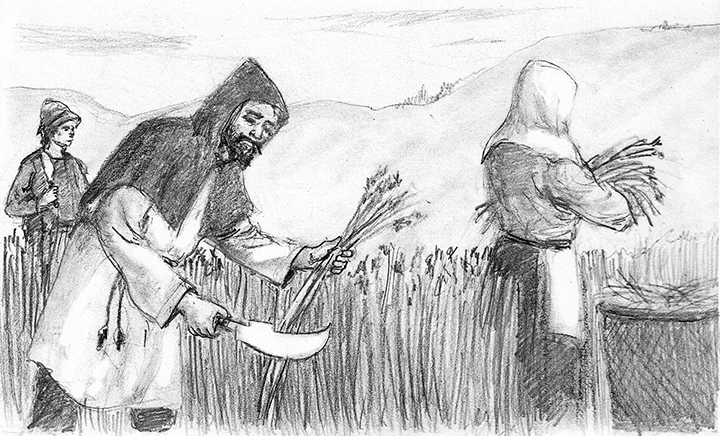 How to use a billhook

I don’t have a problem with royal hunting parties riding through my woods, but I do have brush, saplings, and briars to clear as well as fruit trees and bushes to prune. To accomplish these tasks, I have three billhooks.

Billhooks differ from machetes or Kukri type blades by the distinctive hooked blade that catches and pulls the material in to the cutting edge (a bit like a sickle does) as well as protect the edge when cutting right at ground level. The hook is used with one hand and the wide, heavy blade provides power in short swings as well as the mass to chop hard dry wood without the vibration of the thin machete.

I prefer the type that has a short, straight blade on the back that works as a hatchet for heavy chopping but leaves enough unsharpened back to hit with a baton and use like a splitting froe. I can sweep through undergrowth right at ground level or reach well above my head to open up the woods. For pruning it’s just as handy, easily swiping off small branches or, with an upswing to prevent tearing and a downswing to remove even large branches. This one adaptable tool takes the place of a hatchet, pruning saw, shears, machete, and swing blade to do the majority of any cutting outside.

You’ll find when using a billhook that the weight of the tool does most of the work, if you are used to a machete you will notice that a slower swing is all that is needed. It is also much easier to use on an upswing when pruning. The straight back blade is for chopping thick branches and larger saplings; the size of the blade is a good reference to gauge whether to use the hook or an axe — if the diameter of the sapling is less than the length of the back blade, you can use the billhook.

The first of my billhooks is an antique English example that shows the classic billhook features, slightly more than 16 inches long overall, a 10-inch-long blade with hook and a 4½-inch-wide straight blade on the back. This fine tool is a pleasure to use and very well made with the traditional rat tail tang through the handle peened at the butt cap and still solid. They are plentiful on eBay and antique tool websites and generally can be had for less than $50. 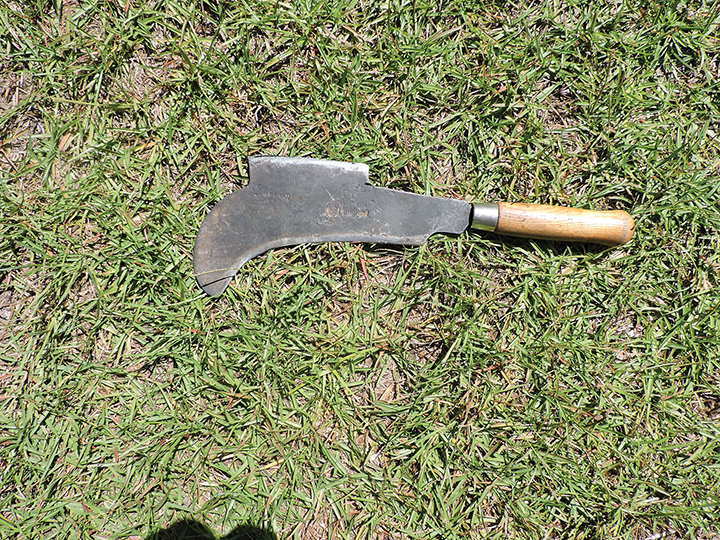 Another billhook I own is made by “Forgecraft USA” and was purchased from Amazon.com for $46. It is an unfortunate example of current manufacturing. The stamped blade is just over 17 inches overall with a 12-inch blade and 3-inch straight blade on the back. It appears to have been “sharpened” with a side grinder. The full-length rat tail tang secures the hardwood handle simply by being bent over. I’m skeptical that this will remain secure over time. It is a really wretched-looking thing and overpriced in my opinion, but it does work fairly well, which demonstrates that a classic design can still perform its function in spite of poor manufacturing. 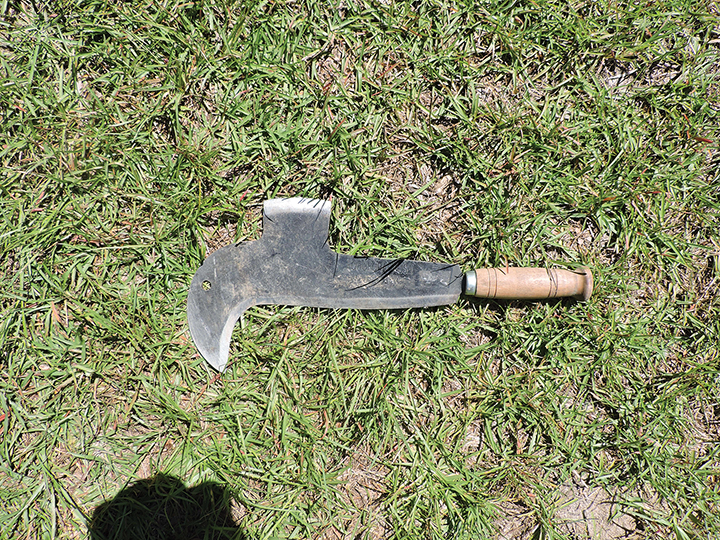 My third billhook is a smaller version from the Italian firm “Due Cigni” purchased from Leoneshop USA for $62. It is 12 inches overall with a 7-inch blade and a 2½-inch straight blade on the back. The handle is stacked leather and has a full rat tail tang secured by welding to a steel butt cap. This is a very handy and well-made hook that I use for light pruning and to cut or harvest garden plants. The leather handle is very comfortable. It takes and holds a good edge; it came with a nice leather sheath to protect the edge in storage. 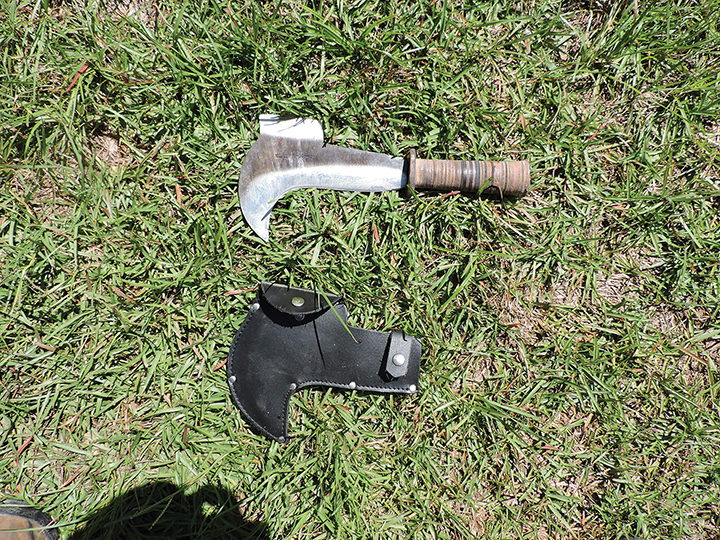 Sharpening billhooks takes a bit of practice because of that inside curve. A scythe stone works well for sharpening, as does a half-round fine-cut file or a round chainsaw file. As with any cutting tool, sharper is safer, so touch up the edge frequently. Billhooks are typically hardened about the same as an axe, so any nicks or chips can be filed out. 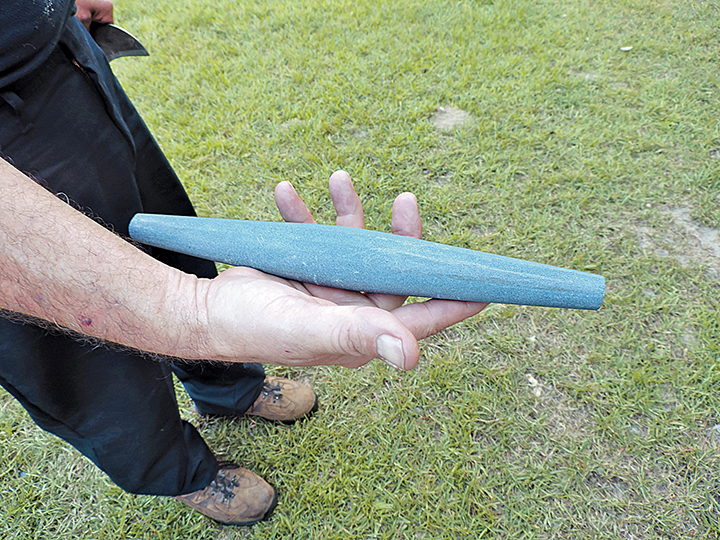 I always say that if I could have only one tool to build a life in the wilderness, it would be an American felling axe, but a good English billhook would come in a very close second.