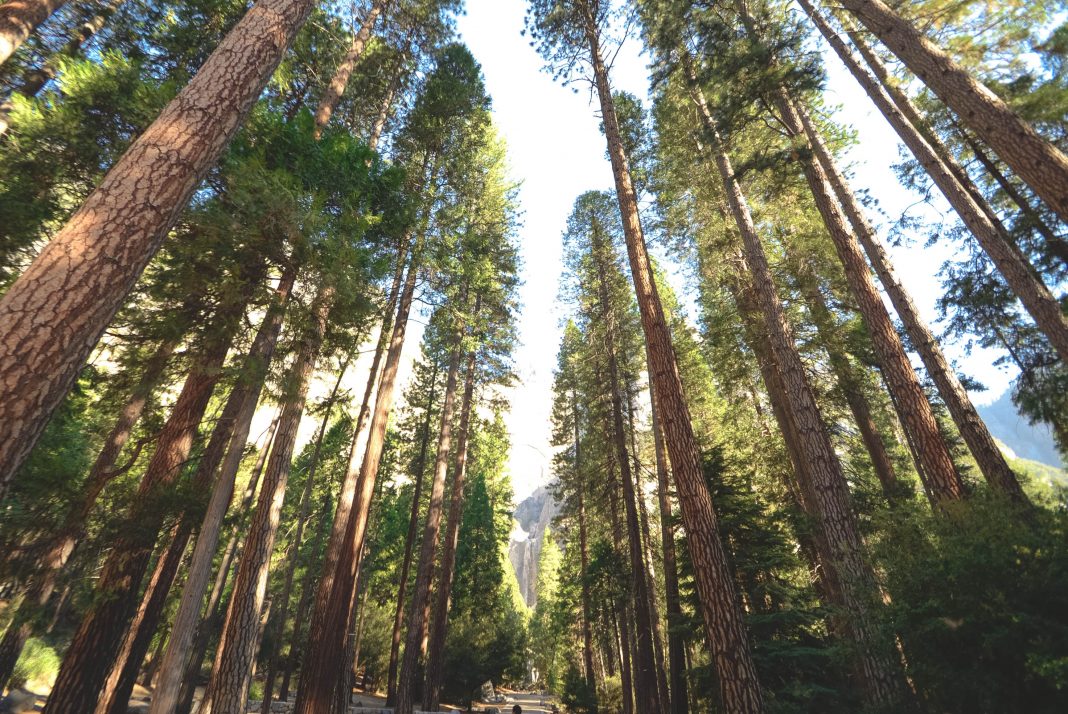 We’re told they include some of the oldest and largest living organisms on the planet. But do they? The fact is, only about one percent of a mature tree is actually alive. This includes a thin layer called the cambium (that lies just beneath the bark), the leaves, buds, fruit, and root tips. Each year the old cambium layer dies and adds another ring to the tree while a new layer grows over it. That’s why we can count the rings to see how old a tree was when it was cut down. It is also the reason why a tree dies when it is girdled (a ring of the cambium is removed all around the tree). Nutrients only pass through this living layer and not the dead heartwood. This also means that when we’re talking about a 700-year-old tree, the living part is a thin layer that’s just a year old; the 700-year-old part at the core of the tree has been dead for, well, 700 years.

Having said this, I’m going to keep with convention, and we’ll consider the entire tree as living. Viewed this way, trees are the largest and oldest living organisms on this earth.

The world’s tallest tree is a coast redwood, growing in Northern California. This particular tree has been given the name Hyperion, after the Titan who was the father of the sun, the moon, and the dawn in Greek mythology. Hyperion stands 379.3 feet high and is thought to be 700-800 years old. It’s estimated to contain almost 19,000 cubic feet of wood, enough to build more than 40 average-size houses. Hyperion’s location is kept secret to keep tourists away. But to give you an idea of how remote it is, the tree’s existence was unknown until 2006. So there may be another, as yet undiscovered, taller coast redwood running around in the forest somewhere. And we can be almost certain there were taller coast redwoods, even recently. However, during the heyday of logging in the ‘60s and ‘70s, thousands of coast redwoods were cut down, some that were almost certainly taller than Hyperion. Today, only five percent of the coast redwoods remain.

When talking about the oldest or the heaviest tree, we must differentiate between clonal trees and non-clonal trees. A clonal tree is one that clones itself either through vegetative cloning or by a process called layering.

Vegetative cloning is when a tree has a root system that shoots up stems that will appear to be individual trees. These stems mature and die, then the roots, which are still alive, shoot up another stem. There can be a whole grove of these trees, covering many acres, that all have the same root system and DNA. There are groves of quaking aspens that have formed like this. Some consider groves like this to be a single tree.

Layering is when a branch meets the earth and sprouts new roots. The trees that form like this are also clones. Though this happens spontaneously with some trees in the wild, orchardists sometimes use this as a technique to reproduce fruit trees.

So, the world’s current heaviest non-clonal tree is not the tallest, but it’s another California tree, a giant sequoia named General Sherman after the Civil War Union general, William Tecumseh Sherman. It contains almost 53,000 cubic feet of wood, enough to build 120 average-size houses. But it’s not the heaviest tree ever known. At least two other giant sequoias are known to have been more massive, but both were cut down, one in 1905 and the other in 1940.

Is there a smallest tree? It depends on how you define “tree.” A relative of the willow tree, called a dwarf willow, which lives in the coldest parts of the Northern Hemisphere, may well be the smallest existing tree. At maturity, it grows to less than 2½ inches in height. There are botanists and foresters who say this size alone eliminates it from being a tree. However, its relatives are willow trees, so it may be that their definition of “tree” is one of practicality and convenience. I think it’s the smallest tree.

The now 4,845-year-old California bristlecone pine, named Methuselah after the oldest living person in the Old Testament, is a non-clonal tree, which was considered to be the oldest living organism on the planet for more than half a century. But in 2013, another bristlecone pine, yet unnamed, was discovered in the same area that was 217 years older. Again, stay tuned — they may find one that’s older.

There’s a difference between how old an individual tree is and how long a tree species has been around. The most ancient tree species is the ginkgo. Originally from Asia, ginkgos can now be found all over the world. They’ve been around, pretty much unchanged, for more than 200 million years (since not long after the rise of the dinosaurs). Some consider gingkos to be living fossils. What makes them even more unusual is that they are one of only five living groups of seed plants. One group, the angiosperms, has more than 350,000 species and includes the fruits and vegetables we eat. Three of the other groups contain fewer species but still have plenty of members. However, the gingko is the only member of the fifth group. That is, the gingko has virtually no living relatives. We know from the fossil record that there was a time when it did, but today it is the sole survivor.

The rarest tree may be the Pennantia baylisiana of Three Kings Islands of New Zealand. At one point, there was only one of these trees left in the world because, after goats were introduced to the islands where they were found, the animals proceeded to eat all but one of them and that one has been the last of its species since at least 1945. It was thought the plant was female, and that once it died there would be no more. However, some cuttings taken from that one wild survivor have produced fruit. This suggests that the original plant may have some male-like qualities that will allow for self-pollination. Scientists now plan to gather seeds from the fruit and hope to use them to reestablish a viable wild population on the islands.

Back from the Dead

And speaking of living fossils, the Wollemi pine, once known only from the fossil record, was thought to have been extinct for two million years. But in 1994, about 100 of the trees were found growing in three small groves, in Wollemi National Park. The park, located in Australia, is a 1,240,000-acre (bigger than the state of Rhode Island) temperate rainforest wilderness. The exact location of the groves has been kept secret to prevent seed and souvenir hunters from finding it. Still, it is at the brink of extinction. So, the Australians have come up with a novel way to save it. You can help save this tree by buying a starter plant online (www.wollemipine.com). The tree is now being planted all over the world. This will not only ensure the survival of the species, but hopefully dissuade seed collectors from looking for the original groves. Proceeds from the sales are being used to help maintain those growing in the wild.